AN UNEXPECTED RIDE WITH ARTHUR

When the weather was nice (note WAS, because it only lasted 3 days !) Rosie had discovered a new place from where she could watch the street and the neighborhood. 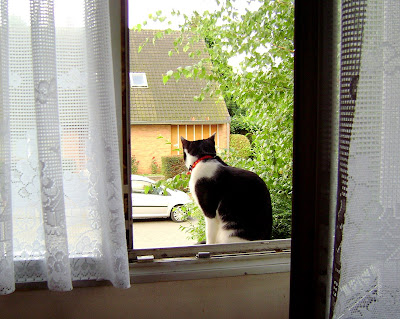 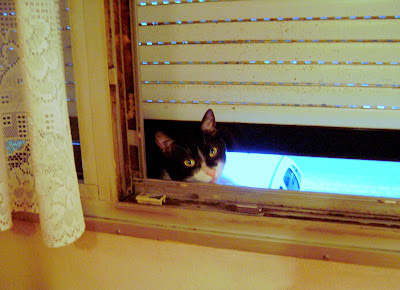 Even in the evening when I had closed the stores, she stayed on the gap between window and store. It was nice and cool there. 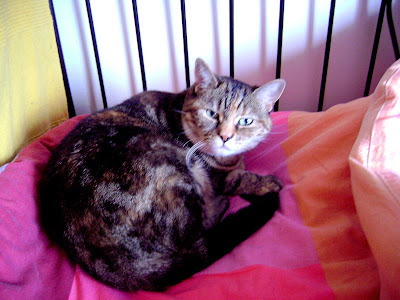 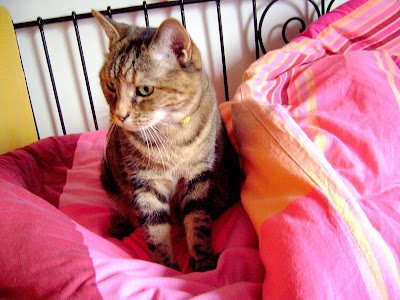 I realized lately that Pookie loves to be photographed ! When she sees me coming with my camera (see picture 1) she starts to purr and then takes a pose ! All the others run away except when they sleep of course.

Arthur today nearly caused me a heart attack. I drove my car out of the garage to go shopping. Nothing special with that, but then suddenly just like in a crime movie, I saw that somebody was sitting in the back ! Two yellow round eyes stared at me ! I got a shock ! It was Arthur laying peacefully under the window in the back !!

I gathered my spirits again and asked myself what to do ? As he didn't move I told him that now as he is already in the car, I take him with me shopping ! I had always done this with my first cat why not with Arthur, if he loves cars that much ! But just when I arrived on the main street, where it was impossible to turn around and go back, Mr. Arthur decided that he had enough of the car, jumped down, started to walk around, then sat on my knees and started to meauw in his loud deep voice like a ghost in a grave !

Now I got nervous I had to turn and go back at the first occasion and while Arthur was singing his operas, I finally arrived at the roundabout and drove back home. Like a white flash Arthur jumped out of the car as soon as I had opened the door and disappeared tail up, very offended.

I was a little disappointed I thought how nice it would have been driving around and everybody looking at the white cat in my car !

When I came back, Arthur was sleeping deeply besides the mice Rosie had put there carefully as usual, she still likes to range her things. 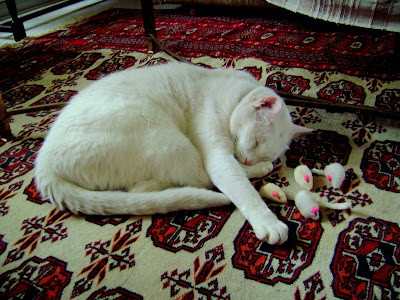 That picture with the mice is so cute!

I think Arthur is really cute~! But I think he just have let mood into your car, hee hee~~
But when you wanna show off your white cat, I think Arthur might know your attention so he wants to go away~~ Hee hee~~ What a clever kid!

Rosie, you look very nice sitting in the window.

Arthur, you are a typical male...changing your mind at the last minute and making your mum nervous.

Pookie, you're a feline supermodel.

This reminded me of the time I had a kitty hidden under my car. I didn't know this, of course, and while driving I heard this intense meauwing in a street where I couldn't possibly stop. I drove slowly imagining a little kitty on a wheel turning around and around (silly me!)until I got to my friend's home. Her husband took care of the little one who had looked for a warm place to take a nap...!
Happy Tuesday!

Oh I´m a big Arthur fan. He is always good for surprises .Love the picture with the mice!

Have a nice day!

Gattina, I did read this post, but didn't comment. As I read all the earlier posts, I decided to laeve comments there.
So.. now I leave a comment here. ;-)
Was thinking you could get a plush toy cat, a white one, and drive that around. hehe

Arthur loves his car rides!
My Alex is the same way and if we leave the car window down or the door open too long when he is outside, he will get in the car and a couple of times we didn't see him until we were down the road!

Luna hates car rides, so Arthur was quite brave to go for even a short "voluntary trip".

That picture of Rosie peeking out from the window is very cute.

Wow, that would have given me a fright, too, if one of my cats turned up in the back seat of my car, lol! Too bad Arthur didn't want to be chauffeured around, maybe next time. Enjoyed the pictures of Pookie and Rosie--so what is the weather like there if not pleasant? It's very hot here, I'm so tired of summer already!

Oh, those mousies! Yum! Too adorable and too cute for words!

We miss you everybody!

A funny story! Cats like to surprise
us, its all in their nature!
Open windows are my cats favorite
spots! They can see the rabbits
running through my garden, what
more could a cat ask for?

I never liked it when a cat would escape the pet taxi or a normally good rider would get nervous and start walking at my feet when driving. I was afraid I'd wreck or something. How funny though that he was in the back?!!1

When we were much younger and a bunch of us had been out to a party and yes, drinking, we were headed up the road and the cat from the owner of the party jumped onto my good friend who was drivings head! I was in the back and at first we thought it was a racoon but he, the driver, screamed so much I laughed until I almost pee'd in my pants. Luckily we didn't wreck...I still see that night so well!

Arthur is the King and Rosie is the nicest Princess, while Pookie seems to act as glamour model, her age, and the rest runs away when they see you with Camera - ha ha. They tease you, Gattina.

What an adventure! We run away when we hear cars....
Mrs. OZ

Pookie is a very photogenic girl! But then, so is Rosie and Arthur. Mommy wished I posed more for the camera, hahaha.

Sorry that Arthur didn't stick around in the car! I'm not a car kitty either... I like to sit in the back and complain to mommy LOUDLY when she has to take me places.

Hee-hee Arthur played a trick on you! He has so much good personality.

Rosie is very cute at her new look out post.