Today Rosie is 3 weeks in her new home and grows and grows ! Although I see her all the time I can almost see her growing ! 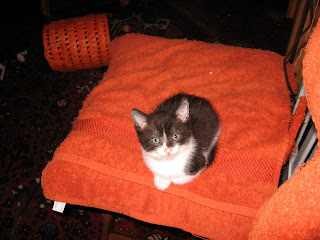 I took this picture the day she arrived and was a kitten baby, screaming each time I left the room or she couldn't see me anymore 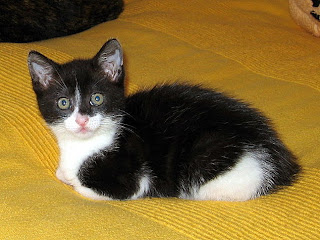 Today she has become a kitten girl, independant and discovering new things every day. Now she eats with the others and sleeps on Pookie's usual places. She also learned to climb (unfortunately) and climbs on bed, sofa, and chairs or up on my legs when I wear jeans, what I always do. Fortunately she is intelligent enough not to do it when my legs are naked ! Especially in the morning after a good night of sleep she is full of energy and runs and jumps around as if the devil was behind her. So far she hasn't broken anything. 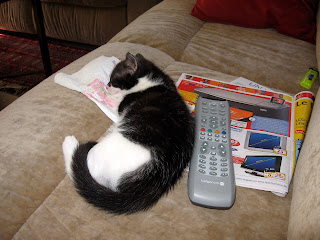 At the very beginning she was smaller then our remote control, now she is at least one head bigger ! 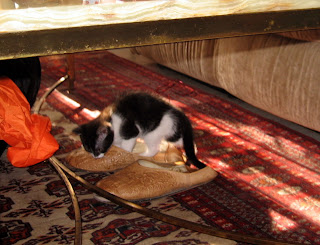 She loves to play with Mr. Gattino's slippers and hides little balls in there. He then wonders why his slippers don't fit anymore.

Rosie also has learned her name and when we call her she comes (or not just like all cats) but when she is in her tender mood then she would come and climb on my soft bosom to lay down (I should do an implant operation for later) and give little kisses on my nose, or washs it ! So I always have a clean nose now.

She also has learned the word "NO" especially when it's shouted. She then would look innocently at you and go away. 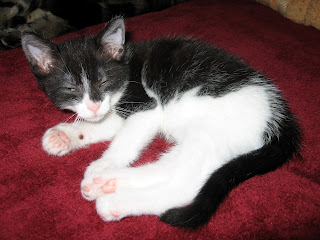 After a while of play time she gets tired and lays down for a little nap. Sometimes in her basket (my filing) but more often on my bed or the sofa. 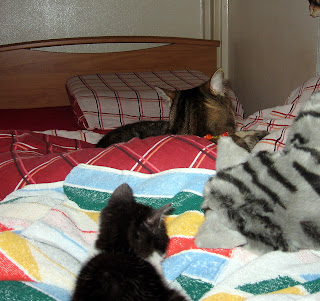 She always wants to be near Pookie, if Pookie is laying somewhere then she would go slowly slowly closer and closer and then lay down too. I think her dream is to sleep at Pookies warm belly. 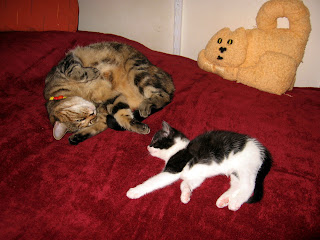 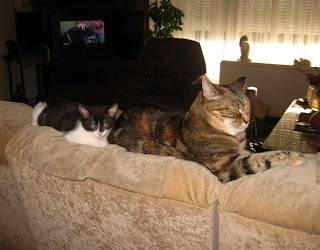 Pookie doesn't say anything anymore, but when Rosie comes too close, she would move or go away. She prefers to give up her place then to fight.

With Arthur it's completely different. I think he just waits until she is a little bigger because he sniffes at her and sometimes stretches out his paw. But for jumping on her as he uses to do with Pookie she apparently is too skinny for him. His half down hanging tail is a very nice toy for Rosie and she can play with it, he doesn't feel anything so he doesn't move either. That's quite funny. They run behind each other and Arthur get's his play instinct back.

Lisa looks at her with disdainful eyes as long as she has to eat, 10 kittens could run around. When Rosie is too close to her bowl she turns around an slaps her in the face.

Poor Kim still hasn't understood that Rosie is also a cat, she only sits there and looks at that crazy little thing with two question marks in her eyes.

Rosie's growing into a pretty cat, Gattina. I think it's rather sweet that she has adopted Pookie as her cat mother and wants to be near here. Maybe, deep inside, Pookie quite likes it, but she's not going to let on to anyone...heheh!

What happened to Rosie? She is so big but last week she was tiny! It's as bad as children, isn't it? You turn your back and they grow up. I love the photos. She seems to have adapted so well but there is still a touch of attitude with the others now and then!

Thanks for all the photos!

That pic of Pookie and Rosie on the sofa is lovely. Looks like Pookie has to suffer a little bit of hero worship!

I can't believe that Rosie is so much bigger than the remote! I remember that early photo of her and she was so tiny!

I am so glad to see that she and Pookie are getting along better. My Rugby (little black teenage cat) thinks that Pipsqueak (big black independent cat) is his Mom. She puts up with him following her around for awhile, then eventually she gets fed up and turns around and slaps him across the face.

I love your photos, she is so cute!

They grow so fast! I love the way kittens play and play and have so much energy then, like a light switch, it turns off and they flop down to nap.

Chloe and Clover would do that as kittens, it seemed they both gave out at the same time... even if they were playing in different rooms. Back then they never bothered to get up on the bed, just sleep where you are. Now they are particular about sleeping on the bed and curled up together!

My comment provider, Haloscan, has been having a lot of problems yesterday... I hope they have it straightened out.

Rosie sure is growing quickly! She is still cute an adorable. :) I am glad that she and the others are starting to get along, even if Pookie doesn't like Rosie getting too close, and Kim is still puzzled by her! All of the photos are wonderful!

She is getting big! I love how they try to cuddle up with the bigger cats! When we had 2 cats they the little one would do this all the time!!

Have a great Tuesday!
♥ Jodi

Yes they grow up so fast, we have to enjoy the time when they are small. And when they grow older some things get easier (for us)and some of them are still kittens inside...
I have had my litle puppy now for five weeks, he also grows very fast. The cats are still bigger than him, but they are nice to him.
Have a great tuesday! :)

It is nice to see Rosie so happy and adjusting so well to your home. She is a part of you now...it tickles me how quickly they take over!

That is very nice of Rosie to clean your nose! What an intelligent and friendly little kitty!

she's so purrty! It's quite sweet that she has such affection for Pookie.

It's amazing how cats are able to adapt new "family" situations and surroundings. And very quickly understand human words - like NO and FOOD etc. May be that's why we love these animals that much.

At least for us, they are the most reliable weather forcast;))

PS. I'll try my best to comment all other COT posts this evening, but the line is very slow again...

She IS growing up to be a beautiful young lady! I liked your cat family story!

Rosie grows every day more, and she is being very beautiful.

Rosie is sooooo very cute and it was great to see she and Lisa goes so well together after all:-)

Btw: Your welcome over to my new blog home!

I wonder what Rosie's mom looks like? Maybe she thinks Pookie is her mother? I love the shot of Pookie laying on her head and Rosie by her on your bed. Benjamin lays like that, I wonder how they don't get a headache. Chris told me today I can't have a kitten...I said I can have one or as many as I WANT!!!! He's not the boss of me, and I want a yellow kitten!!!

Rosie is simply very cute. She is so cute and understanding, and very cute while she wants to sleep.

It is amazing watching her grow through your blogs. She is quite a little beauty. Her eyes always seem to be searching. At least that's how she looks through her pictures. I'm glad the others are accepting her.

I just love to look at Rosie's sweet face. She looks very happy in her new home.

She sure is a beauty, and growing so fast!

Rosie has grown! Oh my and she has gotten quite comfortable in the home with everyone. We are happy to see these pictures.
She looks very content and happy

Dear Gattina... We've been reading about Rosie since she arrived with you and it's very glad for us to see how comfortable is she with everybody at home :D

Lots of kisses for you all!!

Rosie is doing so well! Soon we willseepictures of her cuddling up to Pookie! LOL

Awww! Your kitties are adorable! Pookie looks alot like my Pippin. We played Cats on Tuesday for the first time today. Please come and check us out :)