Yesterday I went to the new Ikea which had opened in Brussels. It's the second one and I had never been there. In a big basket I found all kind of sea animals and bought a little turtle and an octopus for Rosie because she loves to play with little stuffed animals. 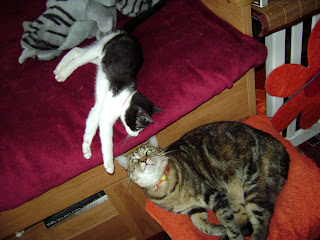 She asked Miss Pookie. Do you want to play with me, but Miss Pookie was tired (as usual) 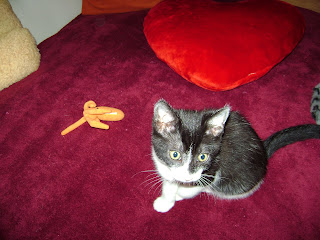 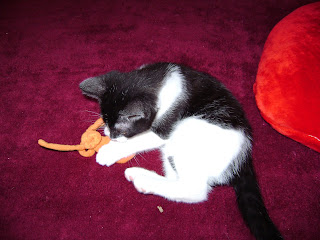 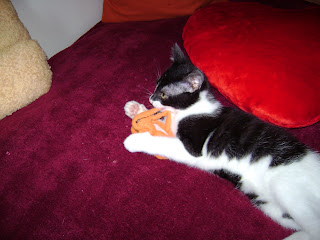 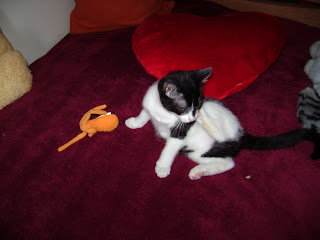 made a little scratch pause 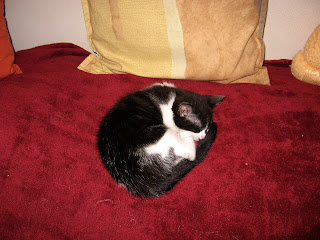 and finally had enough and settled down for a little nap too.

The others were out or sleeping.
Posted by Gattina at 9:14 AM

I love the first picture of Rosie asking Pookie to play. They are getting along so much better now that it's hard to believe that Pookie was so jealous at first. Rosie is having so much fun with her new octopus.

I think Pookie knows very well that Rosie could have fun with new toy. So, she could get more rest~!

I think Rosie will have great weekend with new toy~!!!

Yes, I like the new look, Gattina. Especially with Rosie as the "Cover Cat".

So, she didn't need Pookie to play with her, the octopus kept her fully entertained.

Have a good weekend and don't spoil the cats too much...heheh!

Oh that is so cute! Rosie wanted pookie to play too.
I love the IKEA store that is near Chicago it has everything!
I wish they would build one closer to where I live.

Rosie, you are such a cutie. I think Pookie lost out by not playing with you. But it looks like you had a lot of fun by yourself. Sleep tight little kitty.

We never have a chance to do visit all of our friends. It is good to see you grow Rosie. We like your new toy. You must keep trying to get your lazy house mates to PLAY.

Enjoy your new toy, Rosie! Isn't it fun when the beans go away for a while so you can play like crazy? (Of course, your beans have to come back in time to feed you.)
Purrrrrrs,
Sanjee and the HotMBC gang

I love to watch Rosie play. She's quite a character.