CATS ON TUESDAY
Pookie is the only one who feels that something not normal is in the air, when she sees my packed suitcase. 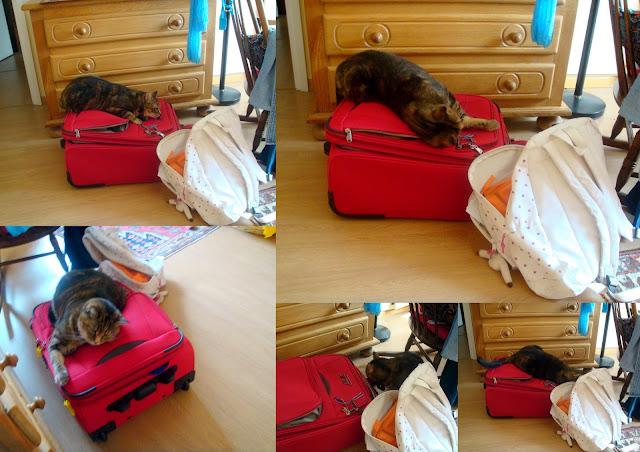 She loves to sleep on it but certainly doesn't want to come with me ! 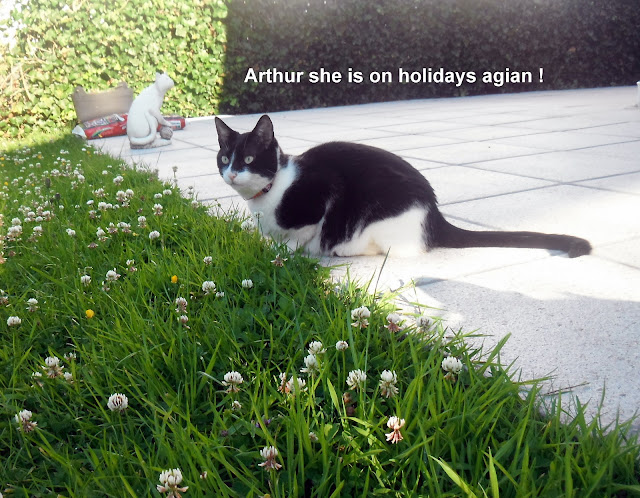 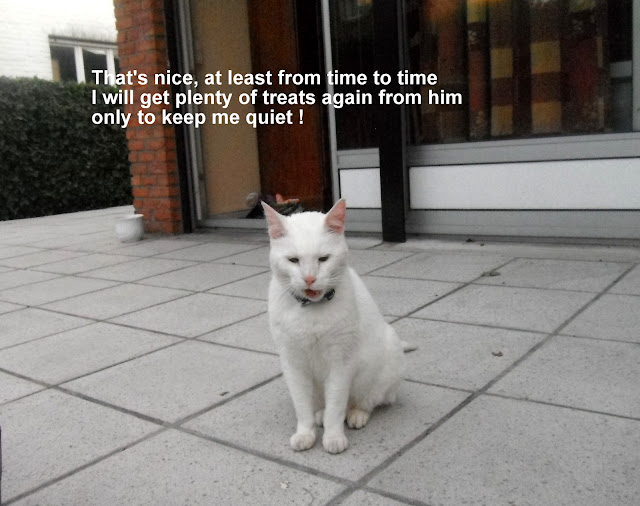 and that's the bitter truth, he will meow loud and terrorize Mr. G. until he gives in and shares his human junk food with him ! Arthur is able to jump into your plate if necessary

Before I left the house I saw him with a green crown, little green grains which sticked on his head ! 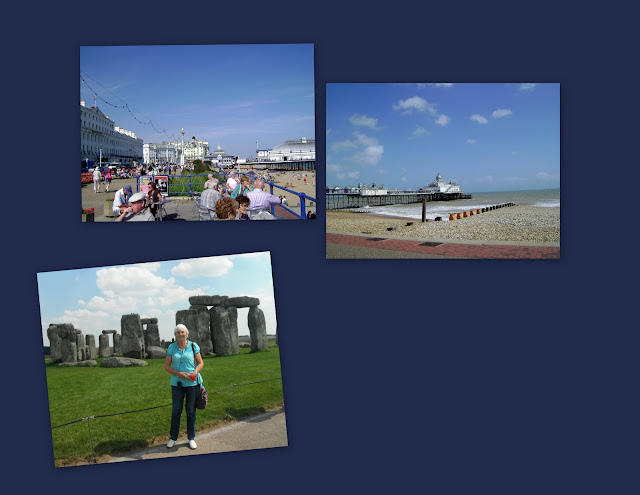 And I arrived in Eastbourne (UK) on Thursday evening where I stay with friends for a week,  after a nice excursion to Stonehenge and a very special sightseeing view on London in its Olympic games dress ! One day before the opening there was Olympic fever in the whole city ! I noticed later that on my train a few groups of athletes were travelling too and were greated with banners and music !

I'll be back next Monday !

Arthur, your human thinks she is having a marvelous vacation, but I think you have the better deal with all the treats you get!

Arthur is such a character! LOL.
Enjoy your vacation!

Have a great week on our Olympic fevered island! Love that crown on Arthur's head :O)

Now we are wondering did Mr G throw those green stuff on Arthur's head?
Have a great holiday and enjoy yourself in England.

What's all the green bits on your head for Arthur? Is Mr G trying to grow flowers there?
Luv Hannah and Lucy xx xx

Enjoy England, Gattina! Will you be staying with your friend with the nice kitties? Hope so and hope the weather stays nice for you.

Eastbourne is so beautiful... A long time ago, I lived in Brighton... =)

Arthur certainly has his routine and priorities straight :)

Enjoy your trip to the UK.

Arthur is a character for sure! Enjoy the Olympics. Bet it rains though lol

We sure hope Arthur, Pookie, Rosie and Kim have fun with Mr. G. And we hope YOU have a great time in the UK, Gattina! :)

Why not leave the red suitcase behind for Pookie to sleep on? You could use an old plastic bag as luggage.
Love the pic. of Stonehenge, I was there many years ago.

We hope you have a good time on your holiday! We haven't been on Cats on Tuesday for a long time - Mom hasn't been a very good secretary for us!! Funny Arthur - always hungry!
Purrs,
Buster, Rudy, Sam and Cindy

Woof Gattina, you are at the olympics? I was at the pet olympics but I got some fierce comPETitors!

I was going to ask what that was on Arthur's head. King Arthur!