While I was away on my Roundtrip through Tunisia, I saw a lot of cats, but out of the bus it was difficult to catch a good photo. 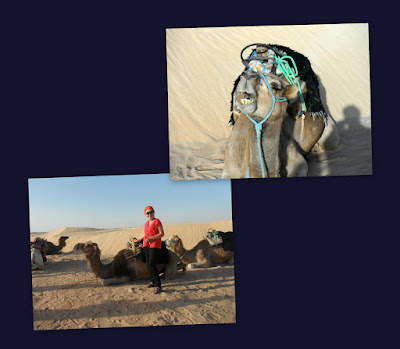 Instead I flirted with camels ! they have such beautiful eyes.

At home everything went smooth until the day when the man who did the joints on our terrace left the door to the guest room open, where Dominique had left her two birds to be taken care of by Mr. G. 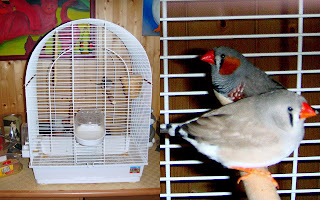 One morning he discovered the open door and a cage without birds. Sir Arthur had taken off the bath and had looked with head and paw inside the cage. One bird seeing his face got a heart attack and died. He found it laying in a corner. The other one had escaped or was eaten by the killer cat ! We never found its body. Of course Mr. G. was very upset, wrapped the little bird in tissus and burried it in our little animal graveyard in the garden. 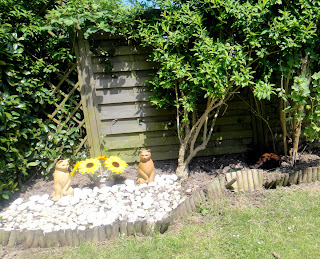 When I was back we stood on the terrace one evening and noticed a white spot besides the grave. Mr. G. looked what it was and discovered the tissu he had burried with the bird. Not only Arthur had killed the bird but he also hadn't liked that the bird was burried together with cats and a dog and a guinea pig, so he had pushed the white pebble away and digged out the corpse ! 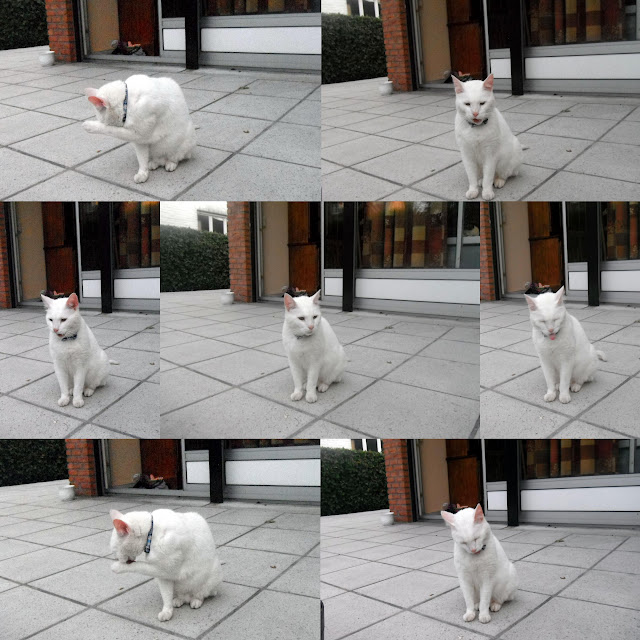 After that he had no remorses at all, and groomed himself after the murder and the grave desecration ! 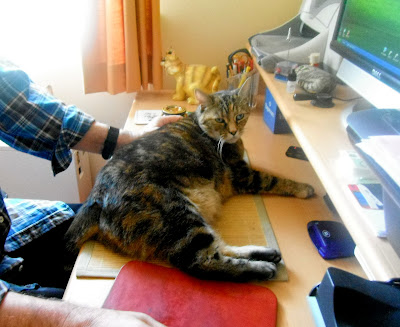 Pookie had spent most of her time with Mr. G at the computer 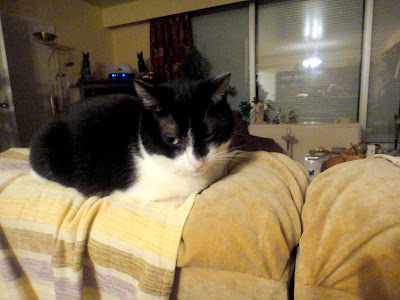 and Rosie was laying around, the weather was rather grey and cold.

Since I am back I have only seen a piece of tail from Kim, but she comes in and eats !

Please leave your link here and visit the other participants

Naughty, naughty Arthur but we still love him! Purrs!

Hello dear Gattina and cat friends!
I'm sure they are all happy with you back at home.What a story!!! Poor little bird! Anyway it's difficult for me imagine Arthur with a scary face, I think he is so handsome! ;)
It's so nice to see you all. Hey Pookie, I also like to be here with mammy in her computer, great spot for a nap!
purrs and love to you all
Luna

Uh-oh, I hope this Dominique human was not too attached to those birds!

OTOH, I bet that was a pretty tasty snack, Arthur!

Glad you're back safe and sound Gattina - you'll have to take that boy in hand!

Ah, Pookie, where is your keyboard? My kitties love to sleep on the keyboard because it is warm, so I have to keep it nearly closed when I'm not using it. Even when I'm using it, Miles tries to creep a paw on it to climb on, ever so slowly so maybe I will not notice.

And Arthur.........I have a murderer, too. Many years ago when my son was wee, we had a bird. I put the cage on the mantle so no cat could get to him. I thought Miles was too old as all we had then were old cats. We came home one day to find cage busted open on the floor and feathers everywhere.........that's it........feathers.

Austin is also a heartless killer! Arthur you should be ashamed, but I guess you're not!! Poor Dominique, I hope she isn't too upset!

Did Arthur look guilty or was he saying "Not Me!!
Luv Hannah and Lucy xx xx

My parent's cat Missy was a shameless murderer, too. My mother said if Missy had to survive by doing that it would be different. Sigh...we still love you Arthur.

I feel so sad for the birds and their owner.

Oh Dear, maybe you have a Zombie bird.

Mjau, mjau... nice to visit you again and have the information updated ;:OD)
Hugs from Sia

Gattina, we love that picture of you with the camels!

Arthur, you don't have to kill the birds ... getting mortadella from Mr G is much easier, you know.

Oh Gattina, how awful! It's nature and there's nothing you can do about it, but gosh Arthur why can't you stick to your bologna?

Poor birds and poor Dominique! Arthur, you are quite the hunter. I like the picture with the camels.

Now I know more about the "Arthur and the birds" story you mentioned in your other post...

Please check this pic, it's the cutest cat pic I have seen in a while.