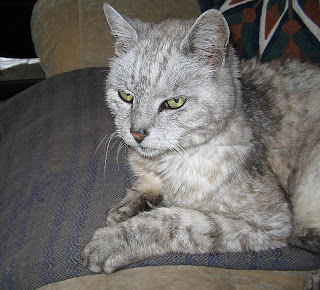 I present you Max. He died in January 2004 and until now I wasn't able to write about him. But he still is part of my life and and now I am ready to present him !

My son choose Max in an animal shelter. His dog had died and he was so sad that we told him he may choose a cat by his own and he came back with little Max. This was in 1988. Max was a beautiful silver tabby which someone had thrown in a field and children had picked up the little kitten and brought it to the shelter.

Little kitten Max became a giant. He was really a very big cat. At his best times he weighed around 10 to 12 kg (26 lbs)but he was not fat he had strong big bones. He was the biggest cat in the whole neighborhood. When Max jumped on your knees I can tell you you felt it ! And on your belly you then saw stars !

Max was and is the bravest cat I have ever seen. When he was older he behaved like a good old family father and took care of his little family. He raised Lisa and Arthur. He never faught with any cat, and was really that what I would call a cosy, friendly, affectionate cat.

Max took everything with phlegm. Cats, dogs, people, children nothing bothered him. When Lisa arrived as a very tiny kitten, he took her to his basket and put her against his strong torse or soft belly and warmed her up. He washed her carefully from top to bottom and Lisa took him for her mother ! She followed him everywhere and it was so cute to see the big cat with that tiny little thing. He even teached her how to wee and Lisa since today still does it the male way !

He did the same with baby Arthur, he really was a very motherly cat. Max died then after 17 years of life together and the whole family was very sad. We burried him under our willow tree in the grave where all our animals are resting. The cats honor this place every day to do what they have to do because the earth is soft and honestly for cat's eyes it could be a big litter box especially with the little fence around. 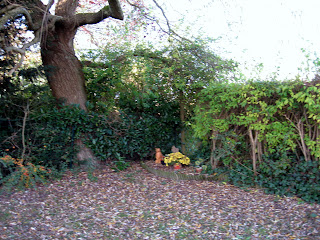 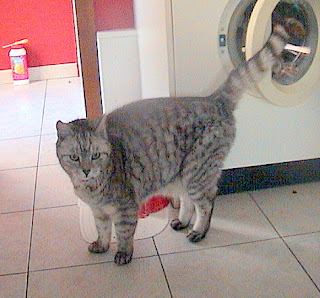 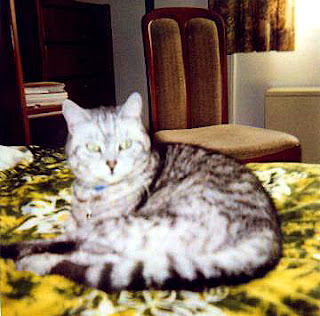 I don't have a lot of pictures of when he was a young boy because at that time there were no digital camera yet and I hated to do pictures with the old system. 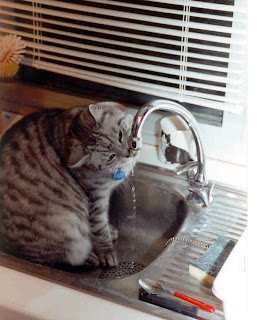 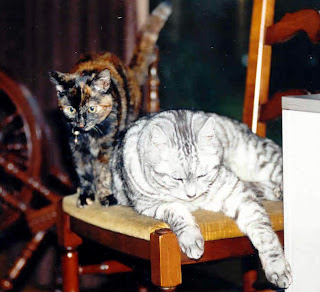 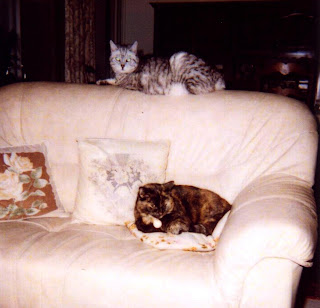 Lisa misses him very much since he is not with us anymore and has become quite a loner. 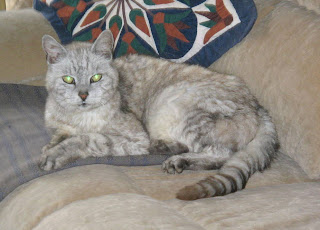 One of the last pictures. His head still looks fine but you can see his age at his body. We had to put him asleep because he started to have a lot of troubles because of his age and we didn't want to let him suffer.

My cat family before the arrival of Kim and Pookie

Now I am not sad anymore, he stays in our heart anyway and we have such a lot of nice souvenirs of him.

What a big sweetie! Thank you for sharing him with us.

What a beautiful boy Max was! A silver tabby!

I am sorry for your loss and for Lisa's.

What a marvelous story. what joy he brought you.

Thank you for sharing his "tail" with us and the photos.

I loved hearing about Max and what a sweet cat he was. Such a big boy -- I'm glad you got the pictures of him that you did and were able to post for us to see! I'm sorry for Lisa. I have the feeling that Socks will grieve when Silver's time comes, although he's quite young yet, thankfully.

What a lover! How wonderfully loved you, your family and Max were.

I'm so sorry you lost Max, Gattina. But he had you, so he couuld never have had a better life. I can see how big he is in the last photo. He was a gem.

I won't be participating this week: I have to give a final exam tomorrow, and as the academic year winds down I am drowning in work! But next week I will be back!

It is so hard to see them go. They leave a big hole in our hearts. Max was a very lucky kitty to have found you and your family and to have so many good years.

He was a beauty! Or rather I should say a "handsome devil"!

oh, he is SO handsome! and so big, he fills up the entire kitchen sink! lol

so nice to meet him, he was with you for such a long time. very wonderful memories you have of him.

What a beautiful boy! I can relate to how you feel about talking of Max.

One day, I will post a story of a very special cat I had. Although it's been nearly seven years, I still get really upset...but one day.

A silver tabby!Very handsome cat.Thank you for sharing him with us.
Hugs

It's so hard to lose them, but especially after 17 years!!! He's such a beautiful cat. On a related note I love the gif of the baby with the cat.

It's 5 am here and I need to get to bed, but I'll comment on everyone else's blogs later...

Max was a very handsome cat! It sounds like he was a big, wonderful cat full of love. So sweet how he took care of Arthur and Lisa when they were little. I like the picture of him with little Lisa - she was an adorable baby kitten.

So sorry to hear you lost him, but he brought you many years of love.

Max was a beautiful boy. Thanks for sharing his story. These sort of kitties stay in our hearts for ever.
Sorry for not doing Cats on Tuesday for awhile. When things die down a bit, I will be back.
Take care, Meow

I LOVED your story about Max. What a wonderful tribute. I really understand how it is hard for a long time to talk about them. He looked like a prince! A delight!

What a handsome kitty he was! I especially love the photo of him with little baby Lisa. What a contrast in size! Thanks for introducing him to us.

I once had a beloved afghan dog names Max! It's a great name, and you posted a great tribute to your Max! I finally got my blog posted about cats and hearing.

I`m so glad we are able to give each other comments again. I was so happy I had to tell my husband about it :)
Your big Max cat was beautiful. I`ve also lost some cats I really loved. I try to think about the good memories they gave me.

I love Max's story. He was quite the cat! I know he's missed but he sounds like he really touched you all and in return, you touched him. Thanks for tell us about him, his story needed to be shared.

I loved hearing how your kittie's got their names! Thanks for stopping by and sharing.

You're Max was beautiful. It was funny, I was just going through some pictures before I went to read your post. I ran across Preylor, my big white cat that I had for six months. Everytime I see pictures of your Arthur I'm reminded of my big white cat. He ate clothespins. We think he got a sliver in his intestines. He was big and heavy, and mean sometimes, and I hated to loose him. Someday, I'll write about him. He died a month after your Max in 2004.

Thanks for sharing Max...

Ohhh, here you are! I was going to the wrong URL...

What a wonderful tribute to Max, how you must miss him still. I wonder what breed was he, did the place you adopted him say?

My cat Pepper lived to be 17 too. I adopted her originally when I was about 14 and when I moved away as a young adult my parents convinced me that it would be too traumatic to move her out (for them, I think). So she became my mother's cat after that and when she died my mother was heart broken. After several years, my mother adopted another cat. Now she has 3!

Cats go crazy with catnip, but some of them dont get so exited. I planted some for cucarañas, but they eat them all :S

HI, I wonder how did you put your own background in the blog? Did you use html? Have you the new blogger version?

What a nice story about Max. He was a cool looking cat, he reminds me of a silver tiger, especially in the picture with baby Lisa. I'm glad you saved him from the animal shelter and gave him a good home and a good life.

Thanks for your concern Gattina, but I'm not sick. Nermal and I haven't been online much these past few weeks coz I'm busy studying for an exam at the end of May. I hope we can play next Tuesday, but it depends on how hectic my schedule is. We'll cook up a good post as soon as we can :D Have a great day!

wow - max is a stunner! He's gorgeous - and the sink drinking from the tap photo is brilliant.

sorry he's gone - but glad I got to see him.

What a beautiful cat, very nice story. It's very nice to hear how he had raised almost all your cats. He is indeed a legacy among your cats. I'm sure that place in your heart is quite big for him.