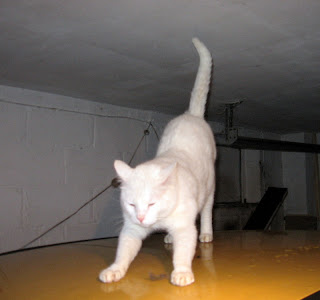 Saturday when I got up I didn't see Arthur. All the others were gathered in the kitchen and expected their breakfast. I didn't really pay attention and went shopping. In the afternoon he still hadn't shown up and we got a little worried and we both thought about Arthur's vanishing in January.

At one moment Mr. Gattino wanted to go downtown and went downstairs in the garage. Suddenly he saw a white spot in his car. He took a closer look and what did he see ? A white furr ball. It was the missing Arthur. Mr. Gattino was very happy that his little darling had showed up again and shouted the good news to me upstairs, so that at least the whole neighborhood knew that Arthur was sleeping in his car.

He opened the door and called him. Arthur slept.

He touched him, but Arthur didn't even move one ear or open an eye. He slept. Mr. Gattino tried to take him out because Arthur doesn't like to drive. Arthur suddenly woke up and looked at him with anger and hissed.

Mr. Gattino stepped back. Then he tried with sweet words and with sounds like kissing the garage air, but no, Arthur stayed where he was on the driver's seat. Mr. Gattino tried again with both hands, Arthur hissed again and tried to scratch him with one paw.

Mr. Gattino was perplex, what to do now ? He tried again, but Arthur hissed again and angrily moved to the other seat but didn't intend at all to come out. Mr. Gattino at his wits end, climbed in the car and drove car and cat outside.

Arthur stood up, surprised and very upset ! He didn't like the motor noise at all ! He decided to jump on the back seat. Mr. Gattino got out and opened the trunk. Arthur looked surprised.

He had never thought that somebody would show up there. And as his curiosity about the trunk grow he climbed over the back seat into the trunk. Ah, thought Mr. Gattino, now I can get him ! But Arthur didn't agree, he found it very nice there and looked with interest at his irritated owner. But finally this one could catch him, got a paw slap on his nose, moved back while Arthur jumped down and hurried up the stairs into the kitchen and disappeared in the bedroom. 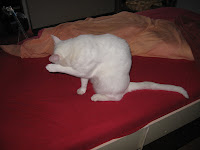 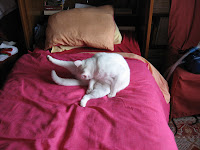 Mr. Gattino full of remorse to have disturbed his poor Arthur proposed him to sleep in my car and wanted to lift him up, but Arthur didn't agree at all. Now it was too late and he scratched Mr. Gattino's hand. 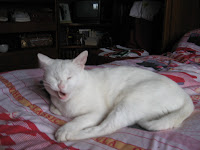 This time Mr. Gattino was offended. His darling cat had hissed and scratched at him ! This was more then he could bare. He went out, got in the car and went shopping to comfort himself.

Arthur settled down and washed his, with a huge black spot decorated tail. He had again been under my neighbour's car.

I am more and more convinced that Arthur had been a mechanic in his former life.

Oh , Arthur the mechanic, that sounds good. Not good is, that he hurts Mr Gattino.

Arthur, one does´nt scratch at the hand, that one feeds ( or so)

Gattina-how awful! I was holding my breath throughout your tale. I was sure something dreadful had happened to Arthur. What a relief when all was OK!! He looks happy washing. Hopefully Mr. Gattino was just as happy shopping!

I am not putting myself in Mr. Linky this week because I will be leaving very early in the morning and will be back Wednesday night. No time for a post, even about kitties! I will see you next Tuesday though. Have a great week!

I have my very first Mr. Linky for COT! Yoohooo! I am also the second person posting BECAUSE I'm now going to do this at night to catch up with you Europeans! Heh heh!Plus for a year I've been blogging my a$$ off, and I need to get back into my morning exercise routine, so my new plan is to blog at night, and then exercise in the morning! I hope this plan works! Wish me luck!

I am glad that Mr. Arthur is back safe at home. Cars are no places for kitties.. even those who were mechanics in other lives.

And Mr. Arthur? Have you never heard the wise saying.... "Don't bite the hand that feeds you?"

Arthur, you are very silly hiding in the car! Your humans were worried about you! Like your human said, it sounds like you might have been a mechanic in a previous life!

Silly Arthur! Cars are no places for cats! LOL

It always hurts my feelings when one of mine hiss at me...I mean I am usually only trying to be helpful! Poor Mr. Gattino. How funny was it that he took over the car? Darius fell asleep in my husband's truck once because he'd left the window down. My husband didn't see him in the back area behind the seat and Darius was terrified when the truck started. We had to laugh at him.

I was also reading your story with baited breath like Mom Unplugged because it seems uncharacteristic of Arthur to hiss like that isn't it? I was worried that he was sick or injured, especially going into such an unusual spot.

Hope all is well now and Mr. Gattino's feelings are no longer hurt. Maybe he should give Arthur the cat cold shoulder for awhile until Arthur comes back to suck up to him again. LOL

Poor Mr. Gattino, I hope he's feeling better now :D Arthur a mechanic eh?! I guess that explains why he was so determined to stay in the car, I guess Mr. Gattino shouldn't have disturbed him then hehe. Happy Tuesday!

I hope all is well now between Mr. Arthur and Mr. Gattion. I'm new here and don't know his hitory, Mr Arthur, that is. Oscar acts this way when something is wrong. He's the sweetest cat but when he's sick or hurt, he acts just the same way. Could he be ill? Like I said, I'm new and don't know his history.

Well, Mr Gattina did not follow the Rule for Living with Cats, the one that states you let sleeping cats lie.
That Arthur is quite the personality. The way he gets around he does need his own set of wheels.

I love the last photograph, where Arthur looks exactly like a guy I know called "Buddy" who---coincidentally---owns his own repair shop. He shouldn't hiss at the hand that strokes him, of course, but cats don't care about polite conventions like that, do they?

Gattina! You scared me so much when I read the title and before I had read the post. I thought he was really gone again. Whew. All's well that ends well, that's for sure.

Mine's up here. It's my first and last submission :)

Arthur! It's not nice to scare your humans like that.
~DKM

So King Arthur is getting a bit dominant huh? *lol*

Ah, he is cool - even with a black spot on the tail.

poor mr. gattino! arthur is quite the curmudgeon. of course, i do not like to be woken from a nice nap, either.

i love the new background, and such fantastic pictures of arthur taking his bath. hard to believe he can be such a cranky fellow...

Wow! Arthur hissed. I always thought Arthur is like Garlic, never know what hissing means. Now Arthur is more like Pelud. Hiss Hiss and Away!

I feel most sorry for Mr. Gattino, having Arthur hiss at him and scratch him. I hope Arthur is acting more like himself after his bath. Arthur, it's not nice to scare your caretakers like that.

Your Arthur sure is a stubborn kitty ... it's his way or no way !!
HOpe Mr Gattino's scratch is healing nicely.
Have a wonderful weekend.
Take care, Meow