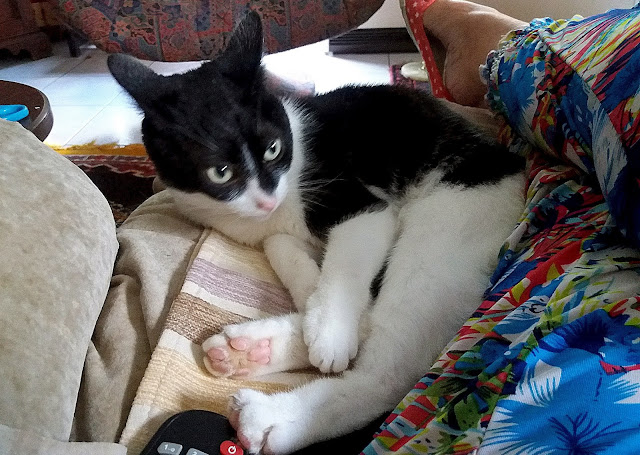 That's my selfie with my paws ! 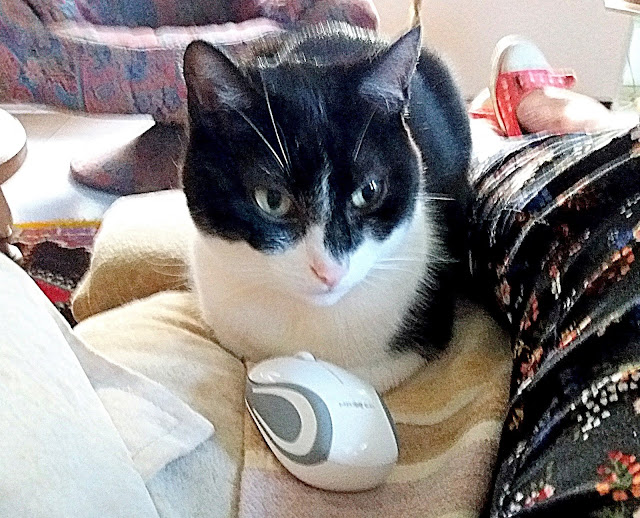 I caught a strange mousie ! 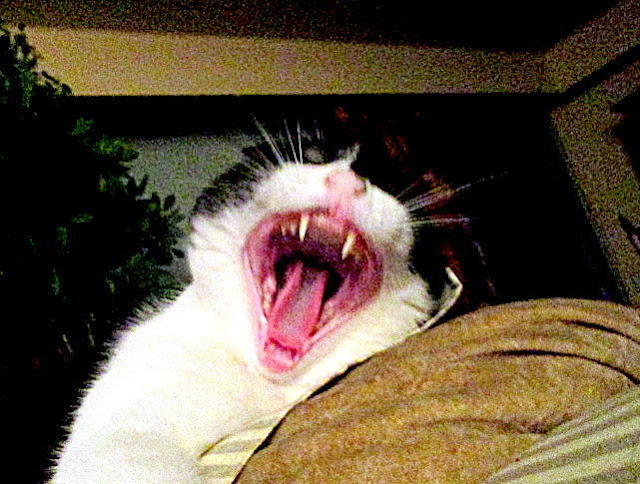 I am soooo tired 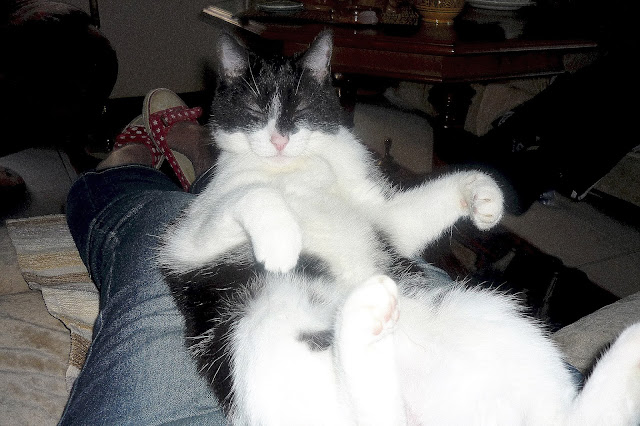 This week my routine was disturbed, which I didn't appreciate at all ! I need my 23 h beauty sleep especially in winter !

What happened was that she disappeared in the basement and came back with a box ! On the table was already a shopping bag standing with nothing interesting in it, because I had checked.

She put the whole stuff from box and bag on the table and started to put things together. 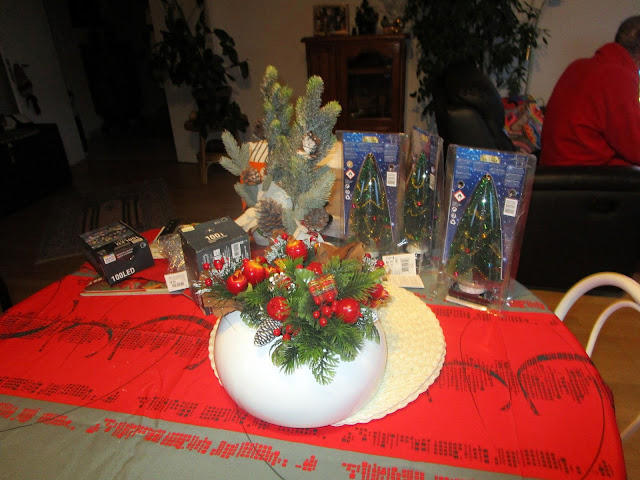 Here is one result the the little Christmas tree she wants to put on the window sill in the Butlers room. Anyway I am not at all interested in these trees. 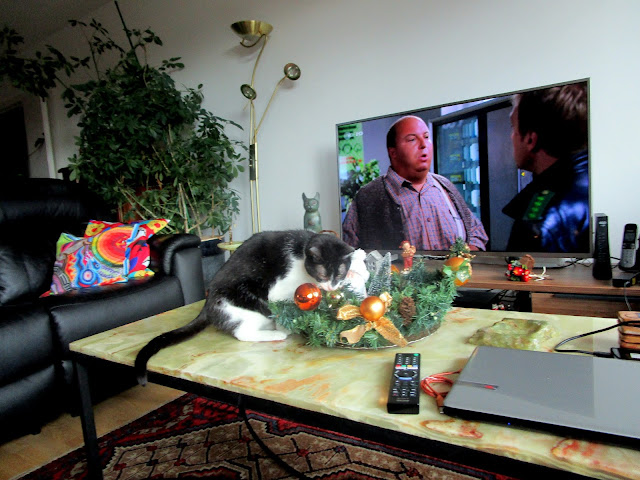 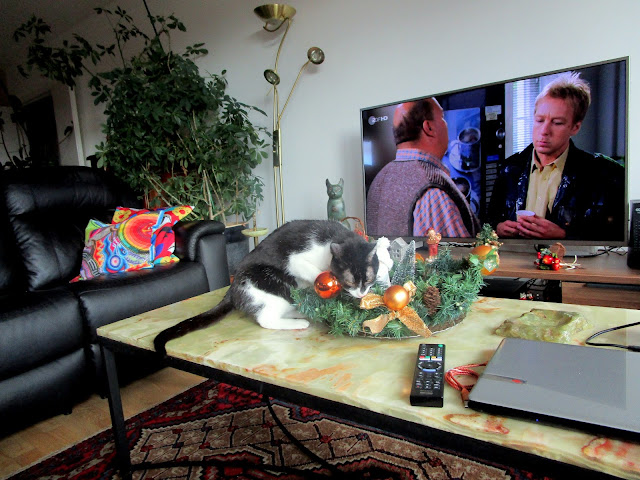 But then I suddenly found a wreath on the table with balls  ! That I found rather interesting. I jumped on the table and sniffed at the wreath thinking it would smell like fir branches, but not at all it smelled awful and the branches were artificial ! She said she did that for me otherwise I would pull out the branches and needles would be in the whole apartment ! So what  ? we have this awful noisy thing which is used once a week which, she said, cleans the floor !
During the night I like to play a bit and check what I could find under the furniture 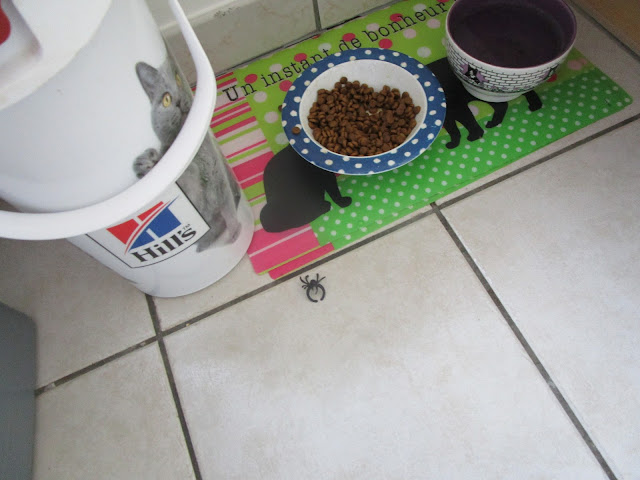 and indeed I found my spider which had disappeared for at least a week (that's what she said) I couldn't understand why she was not happy to find my spider in the water, I thought after his excursion under sofas and other furniture he needed a bath.
I still like to sing when she lays in bed and wants to sleep or at 4 am, I don't know why, it's just so nice to sing when the moon is shining, she leaves the curtains a bit open for me so that I can watch what is going on outside, because the lawn is illuminated during the night, apparently for eventual burglers.
Posted by Gattina at 7:00 AM

Rosie's so cute! Purrs! Most of your Christmas decor is up but we are not sure about our side. Our human may be too lazy to put it up this year!

We love your selfie and your Christmas wreath too. Enjoy all that you find and have fun!

We love your selfie with paws, Rosie. Your Christmas stuff is so festove! And yay that you found your spider!

You have very pretty pink toesies. Glad you found that spider. My Sammy likes to sing right when we go to bed, I have asked him to practice during the day.

What pretty toesies you have! But how fierce you look in one of the other pictures! Is it a roar - or just a yawn?

You did such cute selfies! The tummy up selfie made me squee :-)
Love the Christmas decorations and the wreath.
Glad you found your spider :-)

You have very pretty pink toes. Raven enjoyed sitting in the middle of the wreath even though it was artificial.

OOoh Rosie DOES make me laugh! How indignant she is about the unreal firs * giggle *

I hope she and you have a good and safe week.

I'm glad you found your spider, Rosie! We are still waiting for a light switch to be fixed so my human can put up the tree. (It's too dark in the living room right now!)

Rosie you are right on top of things going on at your house. That is a pro level kitty fur sure

Sounds like you are keeping everything in order at your house Rosie !ay

Rosie is a total cutie - and has some habits in common with our Jazz. He would reject artificial trees and HATES the suck monster.