No way ! I refuse to do a Selfie ! My hair is not combed and I have cercles under the eyes !! 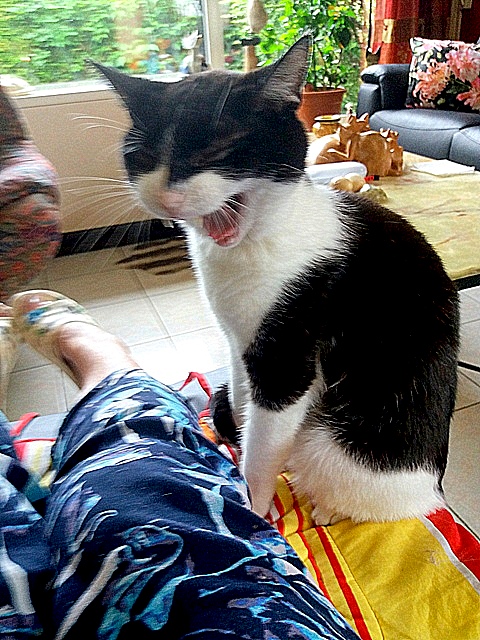 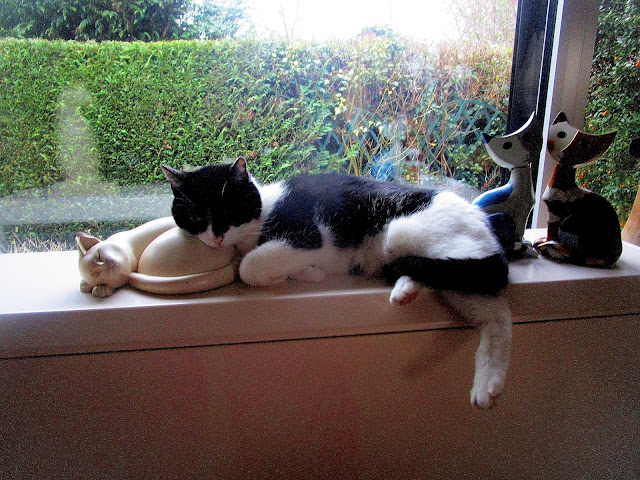 have to sleep first 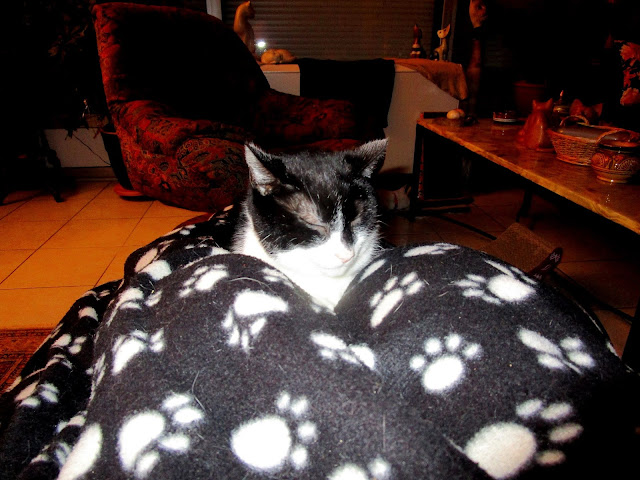 and then watch TV

This week it was awfully hot more than 30° ! 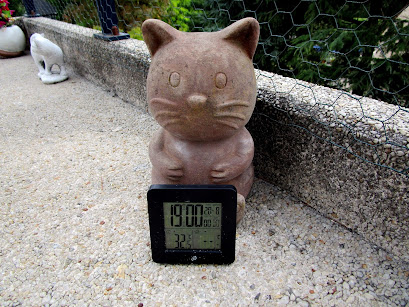 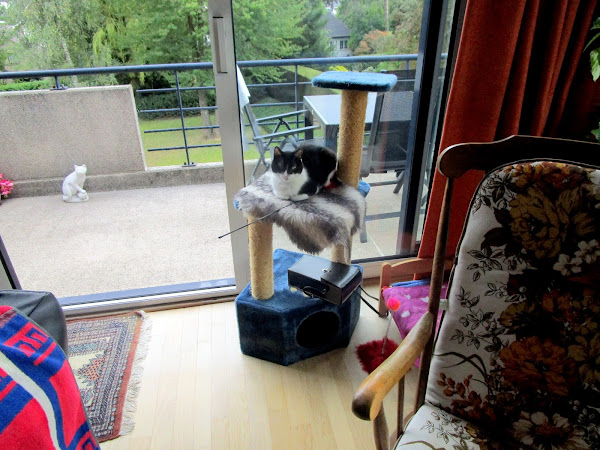 Rosie spent the morning on her tower observing what's going outside 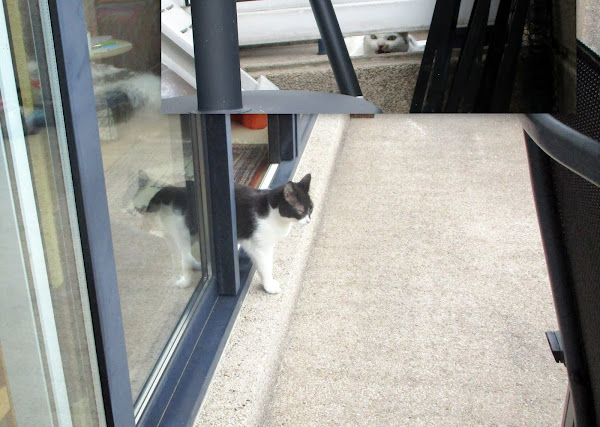 The neighbor's cat is waiting for her, I still don't know her name,  I have only talked once to the lady and then I have never seen her agan. I think her husband works during the night.

It's funny to see when both cats try to sniff at each other, Rosie plays the shy girl and waves with her tail but a little less then before, in a while they will get used to each other 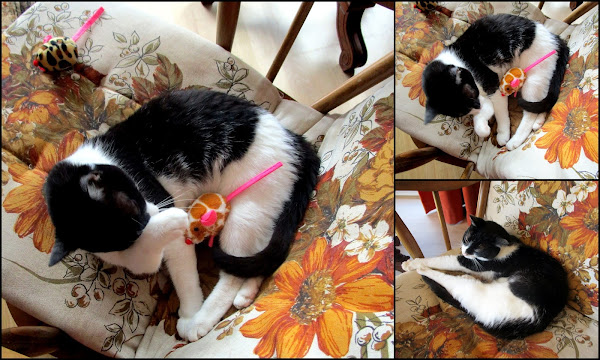 Rosie starts to play with her new mousies but still prefers her green once especially for putting them in her bowl.

Now that I have only one cat of course she gets more attention and as she has become an inside cat I noticed that she was constipated ! Poor thing because she meauwed strangely each time she had to go. I called my vet and she told me to put a table spoon of paraffin oil over her dry food and that would help. Now I will see !

This is the second post I do, because with this "simplyfied" new Blogger all photos had disappeared or the text was not in the right place, I would prefer if they returned to the "complicated" version. It's very much time consuming ! Maybe one day I will understand "simple procedures" !

We did try to post on last weeks post, but I am not sure it made it through. I am glad however you got the Blogger thing sorted. Those temperatures are way too hot for us, and we melt, even with air con. I am sure Rosie and the new neighbour cat will be best of friends once they get through the awkward social introductions and new girl shyness ;)
Maybe the new toys will find appeal, despite being the wrong colour, once they have been dunked in the water a few times ;)
Stay safe and well!
Purrs
ERin

Oh, We do so agree with you about the new Blogger (grrrrr)!

Still, the pictures that you posted are furry cute, all the same!

We love that Rosie's head on butt selfie very much! :D Purrs and hugs!

Those are sure terrific photos! I hear lots of humans grumbling about the new blogger. We sure hope the constipation goes away soon.

We really loved the second photo. It's so sweet.

Rosie you are such a sweetie and we think that new mousie will be just fine once you break her in. Yeah. New Blogger. Ugh

It sounds like Rosie is getting used to indoor living. How sweet that she and the neighbor cat entertain each other. We have our paws and fingers crossed the paraffin oil helps!

You are a beauty Rosie. I put 1/4 teaspoon of Mirilax in canned food for constipation, it is tasteless so they don't even know.

Good that you are making friends sweet Rosie, your selfies are precious!

You are always looking good and selfie-ready, Rosie! I hope your constipation will go away soon. Niko tends to get constipated and we use pumpkin.

Have a great day xo

Rosie! Wes knows exactly hows yous feels! Wes ALL refused to pose this week so our human was forced to do herself for the selfies this week! It has been so furry hot and wes is either puddle under the deck, sleeping in the shed or under the bed!
Purrs
\Marv, Jo Jo, Kozmo, Cinnamon and Angel Nellie

Don't give up on the new Blogger. It id something that you can and will get used to. It's (hmmm) a new way of looking I guess and I KNOW you can do it!!

Hope you can get Rosie regulated and she and the neighbor kitty get better acquainted. Puurs.

Love your photos! The new blogger is definitely frustrating.

When you are hot and bothered, the new blogger methods seem so much worse...phooey!
We are hot here, too, but not quite as bad as that, and at laest we do have AC. Else we would be a melted mess.

I, Pipo, MOL'd at your first picture:)
Cute series of selfies!