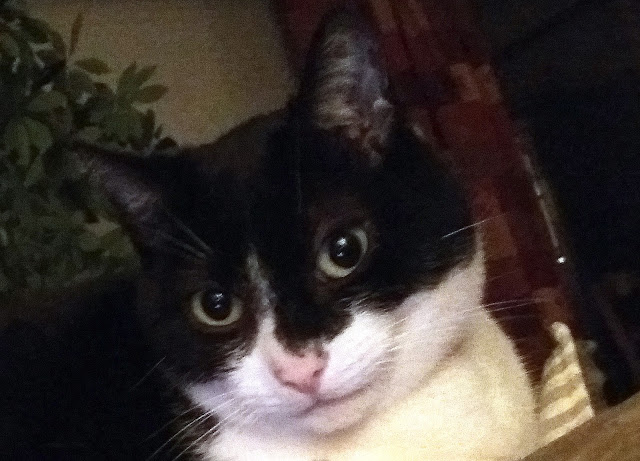 This look never fails, when I do this I get what I want (or almost) 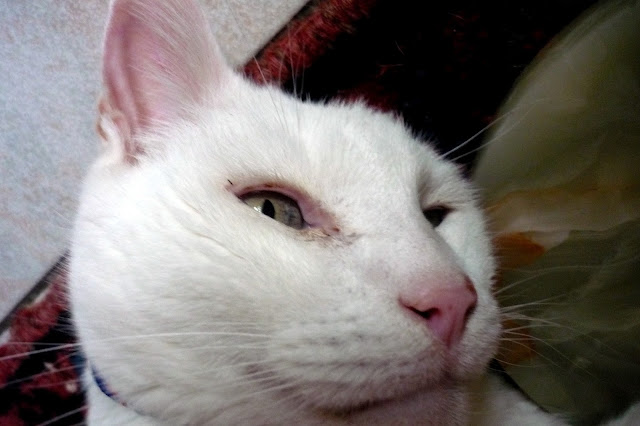 If each weak I am bothered with these selfies, this time I try a wink !

Looking out of the window for inspiration, my eyes caught Rosie very busy to eat (!!) a mouse ! I don't even like that she catches a mouse and play with that poor thing but here she ate it ! From top to bottom, the only thing which remained was the tail ! 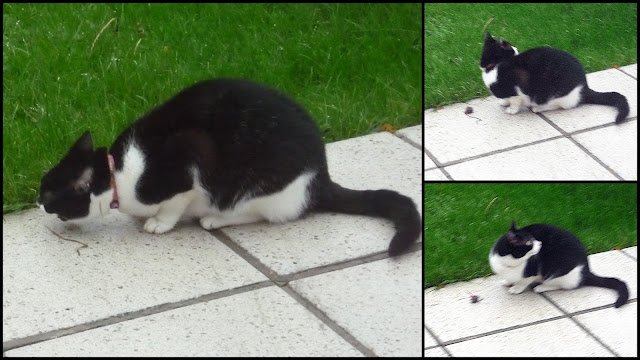 and she so much feared that somebody would take her prey away that she took a bite and then looked around her !! Fortunately she was kind enough to do that outside and not in the house. 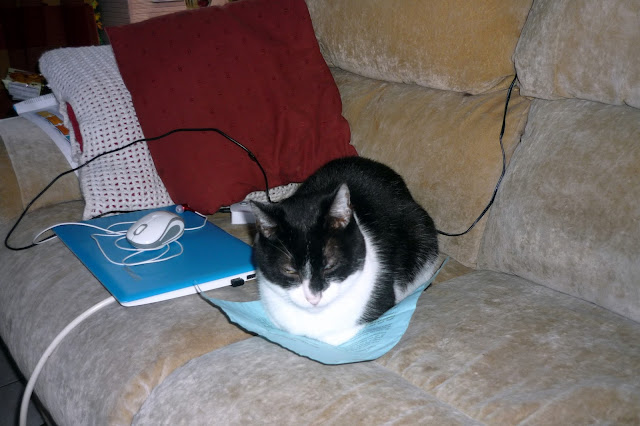 and then with a full stomach she returned into her wires and my blue invoice which she occupies now in the 3rd week ! 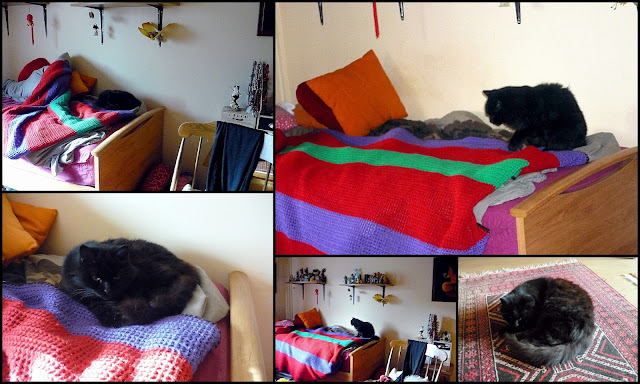 Kim who for weeks was glued in snail position always on the same spot (right below) moved !!! I was so happy to see her on my bed ! That meant that she can still jump and is not so half dead as she pretends to be ! Anyway her fur and her appetite confirm this fact. Strange cat, now she comes to me for cuddles ! It took her more than 10 years and also, unfortunately, she started to meow not all the time but if you had a dumb cat for so long it surprises when a meow comes out ! 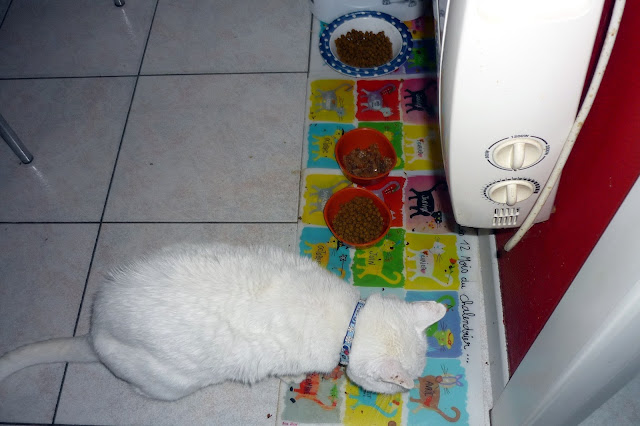 Sir Arthur has a good appetite but he is difficult too, look at the range of bowls where he has the choice from. To be honest not only him the others too.

He also has met our new neighbors, I don't know if they are cat lovers, but at least they didn't chase him away, apparently he is often in their garden. 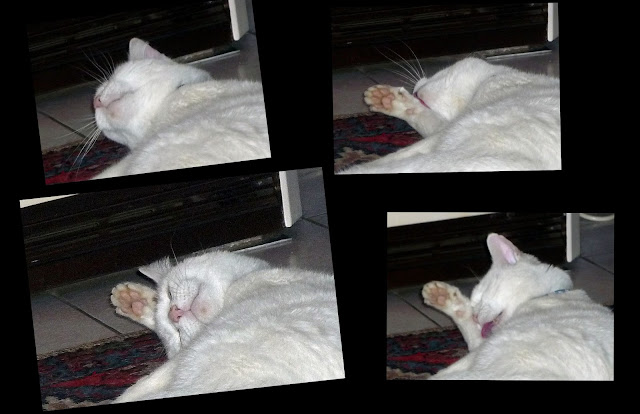 The best weatherman in Belgium is Arthur, much better than those on TV or Newspaper, when he washes behind his ears you can be absolutely sure that it will rain  the same day or the next day. Sometimes also the 3rd day, but usually it is always right. I have to add it rains quite often here, but that doesn't mean that he also does ear cleaning.

Arthur can charm anyone, so I'm sure he has done that with the new neighbors.

Good on Rosie for catching and devouring the mouse. They normally leave the tail and the bitter stomach. My cats are also so fussy and turn their noses up if I come with anything new in their menu.

I'm definitely one for scoffing the mouse, when I can. Great balanced diet and a quick and easy TV dinner MOL
Looks like everyone is well, and seeing Kim in a new place is a delight, clearly she knows a good spot (or two) when she sees one!
Toodle pip and purrs
ERin

Well done Rosie! Flynn would eat everything except the stomach which I assume was too bitter. He would always like to bring it in first to show me though.
Lovely selfies from both of you.

Crafty Garden Gal (find me at PlayingInCatnip.com or HomeGardenDiggers.com) said...

Those are some great selfies. Rosie sure is a good mouser. My Zoe catches and eats them, too.
Yael from PlayingInCatnip.com

I am glad Kim finally warmed up to you even though it took a long time. Nice selfies from everyone. :)

Hehehe you're not snoozing today...yay!xx Speedy

I'm so glad that Kim is being more active! And we love Arthur and Rosie's selfies. Nice job with that mouse, Rosie! And good work charming the new neighbors, Arthur!

Lucy never gets to eat a mouse- we leave that to the coyotes and hawks!
Have a great week-you have lovely cats!

What is it with cats insisting on sitting on paper when it can't be comfortable? Seems they all do though.

Oh the joy of owning cats, they are so entertaining, they look very happy
Im just getting back to blogging so not sure how it all works anymore things have changed but i have missed it so will come back and visit.

Our Harvey is a quiet cat with an odd meow that surprises us too!