Apparently the cold is gone and it's getting warmer. Except Kim and Pookie, Arthur and Rosie are happy to go outside and inspect the neighborhood. 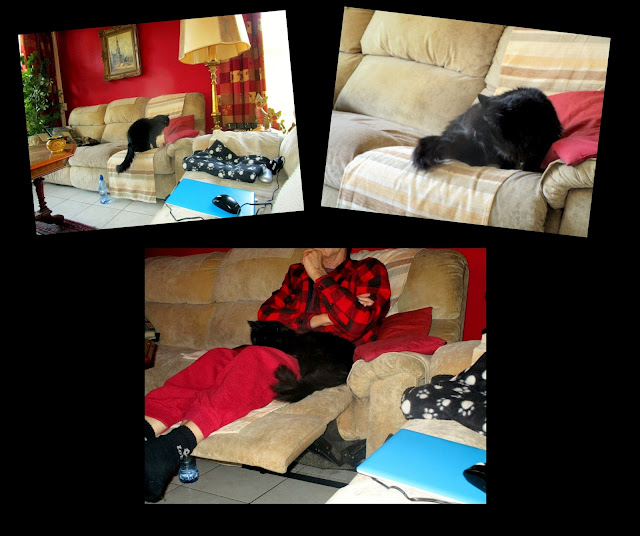 Kim the whole day long with a few interruptions lays on the sofa and waits for Mr. G. It's nearly unbelievable but it's true. She jumps up, turns around settles down and waits. As soon as she sees him she starts to meow until he has also settled down and then she would curl up on his lap. Unbelievable too, is that she wants now to be brushed !! Only with me she hasn't changed a lot, I am just allowed to pet or rather touch her head ! 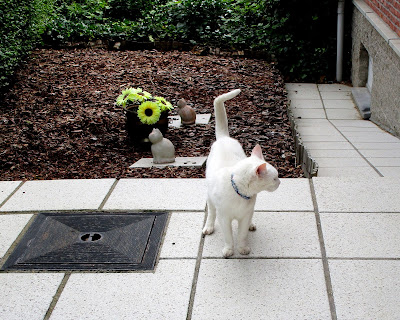 Arthur makes his rounds around the house 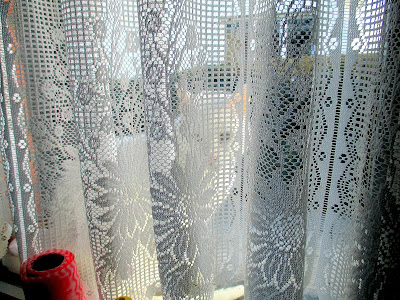 and peeps through the curtains into the kitchen. 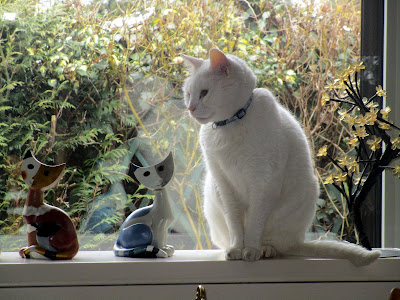 Or he sits inside and checks the outside !

One day during the week I saw him laying in the sun on our neighbor's patio. Suddenly he got up, looked through the window door and then I saw the door was opened and Arthur disappeared inside. No wonder that he has less appetite now, when he visits the neighbors !! 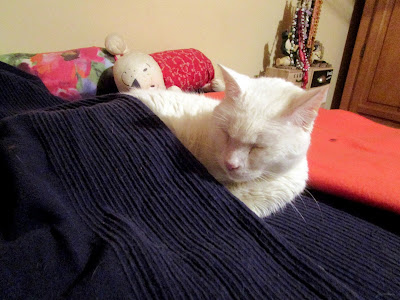 and the best place to digest and rest is my bed ! 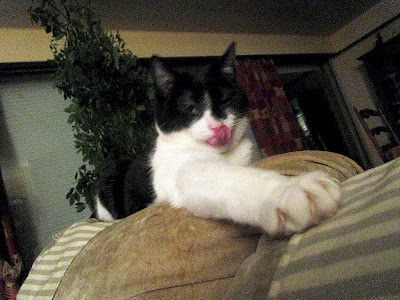 Rosie had just her dinner and shows her little tongue 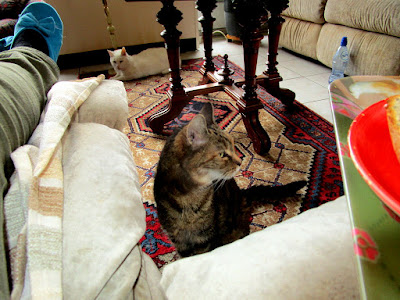 Pookie has some difficulties to jump on the sofa with her arthritis, but after two or three trials she manages it. I don't help her, I think she has to exercise a bit to keep fit !

A not very exciting week, but they all seem to be happy.
Posted by Gattina at 10:35 AM

Good to see everyone. I am glad Kim is doing so well. That is funny that Arthur has friends in the neighborhood.

Arthur certainly seems to be enjoying his trips in and out of the house. I like the photo of him behind the lace curtain.

Kim is just like our Giulietta, who always wants to be on her dad's lap, and will whine until she gets her way. How fun that you caught Arthur sneaking into the neighbor's house. At least you now know what was making his appetite less. XOCK, Lily Olivia, Mauricio, Misty May, Giulietta, Angel Fiona, Astrid, Lisbeth, Calista Jo and Cooper Murphy