Visiting a friend, I sprained my ankle when I got up from the sofa !! At first I didn't feel nothing but after an hour my foot was swollen like a balloon and it ached terribly. Cream and bandage helped a bit. So I was locked in for the whole week. 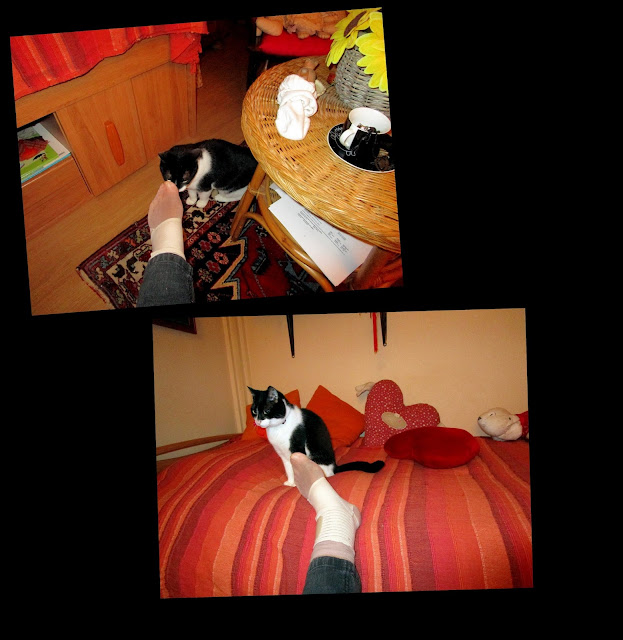 Rosie didn't take a lot of notice of my poor foot, but she was happy to have company the whole day, other than Mr. G. It had rained the whole week and despite the fact that she went out mouse hunting and came back wet like a sponge, the mousies must have decided not to go out in the rain. So no mouse corpse this week. 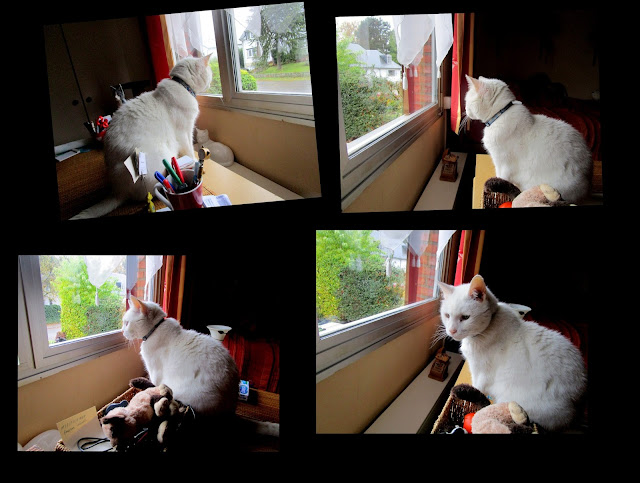 Arthur watched over the outside world sitting on my desk, what he saw were umbrellas in all colors, and of course the dogs who belonged to the umbrellas. People without dog wouldn't go out in this sh..t  weather ! 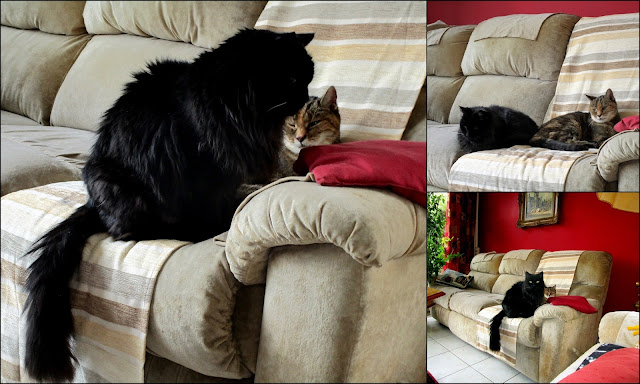 Our independent Kim who was always outside and preferred to stay alone, looks now for the closeness to Pookie. Pookie had been her "mother" when they lived with my son in London, and Kim was a baby. She always slept against Pookie's belly. Now for obvious technical reasons it is not possible anymore because Kim is at least two sizes bigger than little Pookie. But apparently it doesn't matter ! 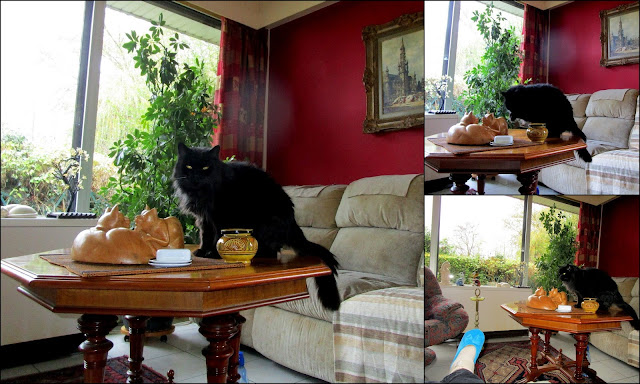 Now as she doesn't go out anymore or only occasionally, she has learned to jump from furniture to furniture and she had tried to jump from the sofa on the table. She fell down, because here hind legs are not the once of a young girl anymore, but she insisted and managed ! Much to the nuisance of Mr. G. who sees his view on the TV now cut off by two cats (fortunately not at the same time) Kim and Arthur. 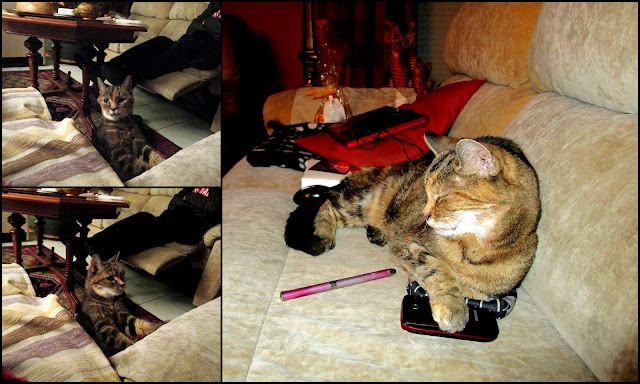 Pookie too has difficulties to jump and calculates for a while before she jumps, but so far she manages ! 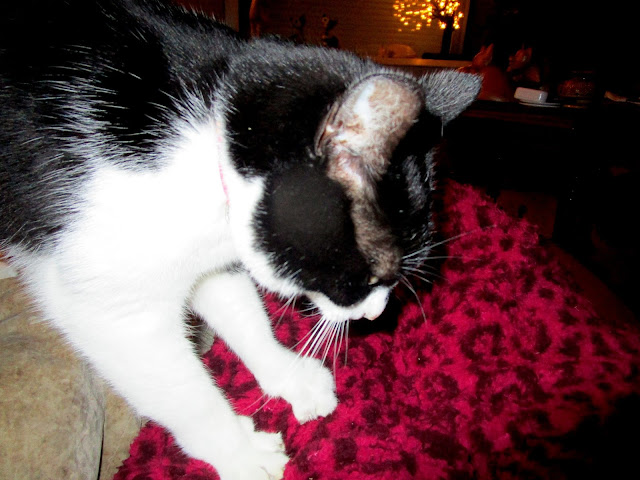 Rosie finds it nice that I am always laying on the sofa and tries to make pasta out of my trousers !

I'm sorry to hear you have sprained your ankle Gatina and are having to rest. Here's hoping that you will soon feel better with all your "nurses" queueing up to assist you with their dinners.

You are blessed with many unique felines. We hope your ankle heals quickly. My favorite pictures in this post were the ones of Kim and Pookie. Beautiful!

We always want to hear about what the kitties are up to on a daily basis. Get better soon.

We are lucky that Binga and Boodie are still good at leaping on stuff! Boodie is 15 and Binga is 16 - and she still jumps on counters to try to get water from the sink. Why the latter, I don't know (we have water fountains), except that maybe she's a bit senile in her old age.

Sorry about your ankle- ouch! Great photos of everyone. I think that is sweet that Kim likes to be with Pookie.

I hope your ankle is better soon.

My first kitten Felix was about 4 months older than Smokey, the second kitten I adopted so he's have a companion while I was away during the day. He doted on her and protected his "little" sister. He grew to be 9 pounds, but she quickly outgrew him....to nearly 18 pounds. But he was always her "big brother".

Arthur looks so handsome sitting at the window.

When I read about your gang, so much of it is just like here with Kitties Blue, and it makes me smile. I hope the kitties were good nurses while you were off your feet. Hugs, Janet