SELFIES AND NEWS ABOUT MY CATS 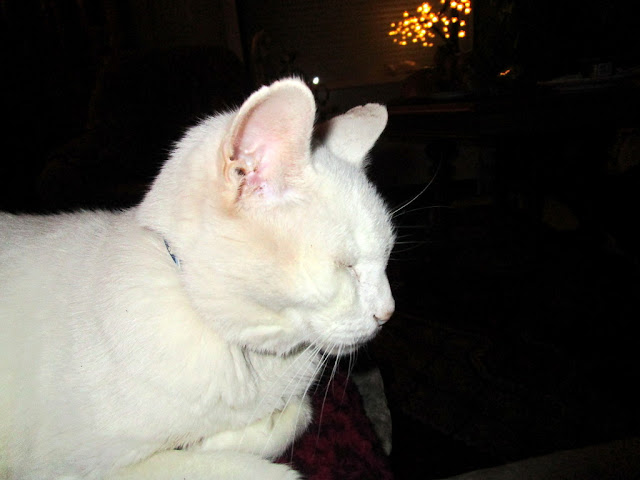 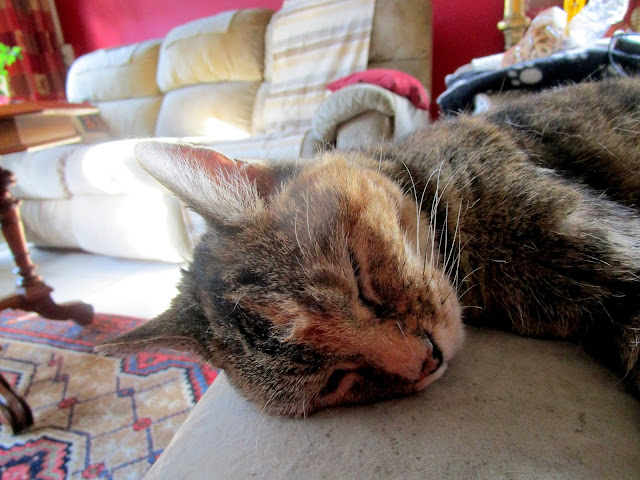 Pookie was half asleep but did her duty 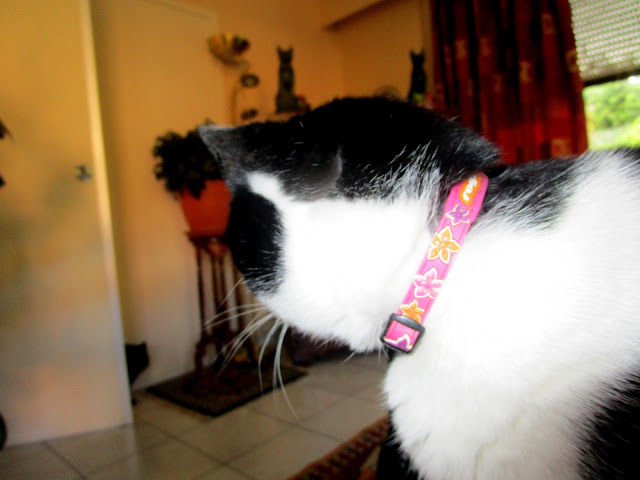 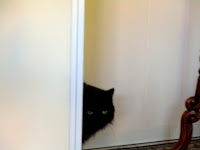 Rosie was distracted by Kim 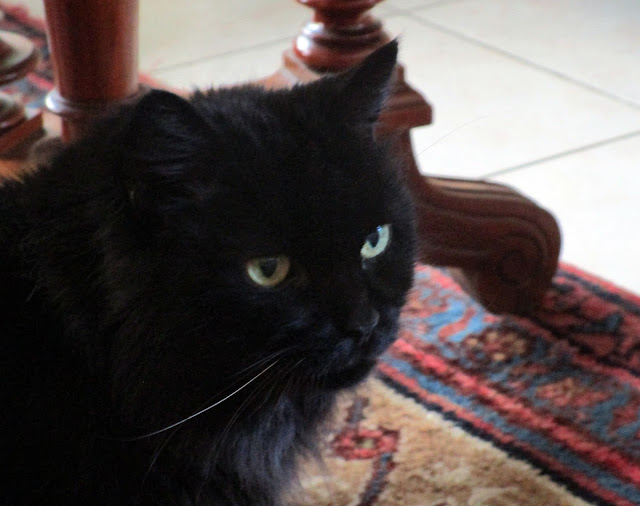 The only one who really did his best was Kim as you can see !

We had mixed weather this week, so my cats had mixed occupations too. 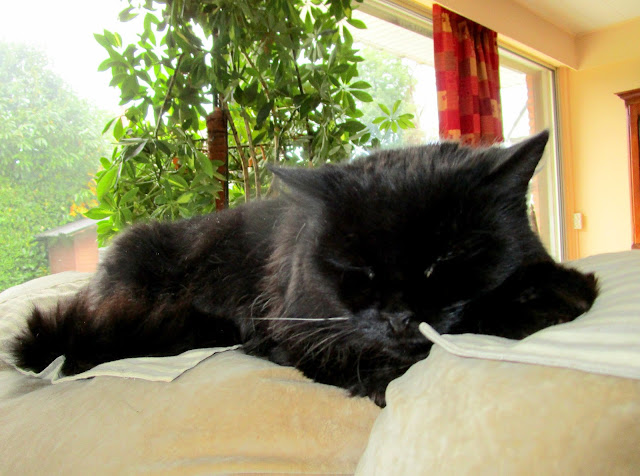 Kim now is sleeping mostly inside and doesn't go outside very often, what a change she really became an indoor cat now or nearly. As usual she doesn't bother anybody and acts just like a room decoration. 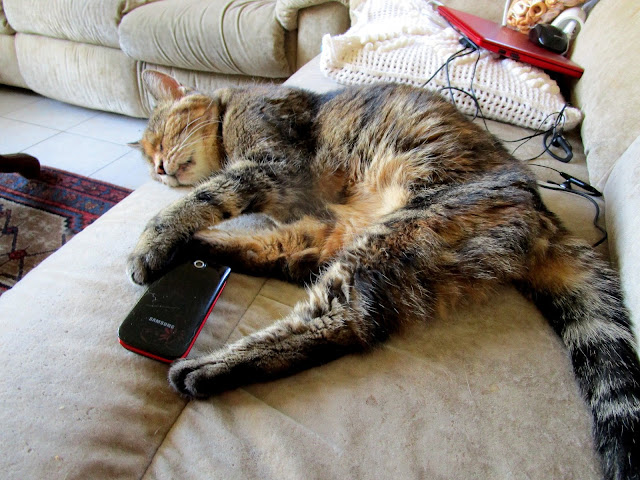 Ol' Pookie is my telephonist only she doesn't hear the phone ringing and therefore continues to sleep on it and sometimes I find my mobile under her belly ! 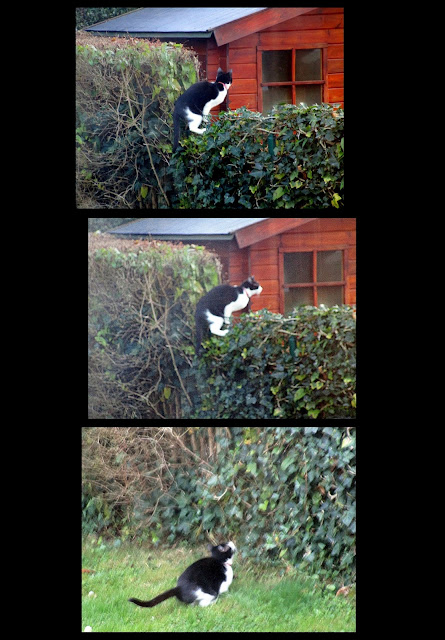 Miss Rosie is still active with bird and mouse hunting, this week without success not even a mouse, at least she didn't bring any corpse home. 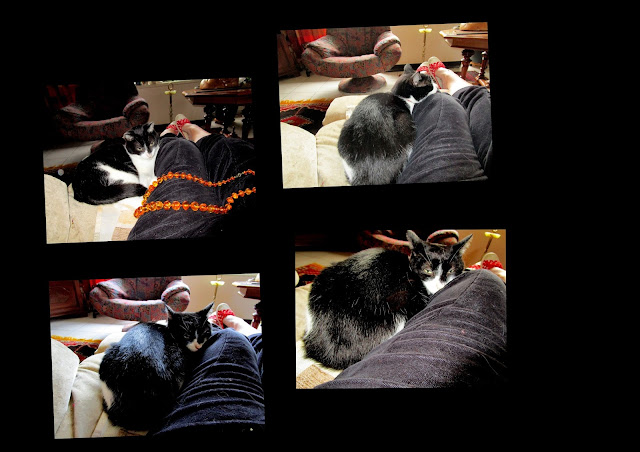 In the evening she likes to watch TV with me and my knee is her head holder !

The only one who brings some action in this house is Arthur the terrorist ! 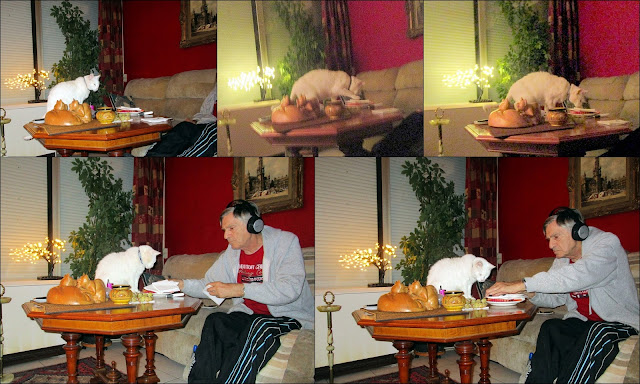 He tries to steel Mr. G's dessert, after having got already a lot from his supper. Slowly, slowly he approaches the plate and then stretches out his paw, while Mr. G. watched his murders on TV and then suddenly he realizes that his dessert is in danger and tries to chase Arthur away with no success. He had to protect his plate with his hands ! Poor man ! 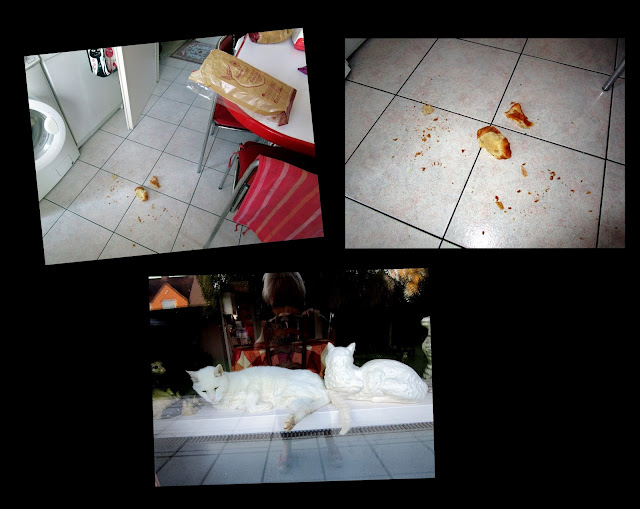 Mr. G. is not the only victim ! Me too ! He had bought croissants for me and had put them on the table. A few hours later I found one of my croissants half eaten on the floor ! Arthur steels everything which is edible ! What a thief ! Poor me had only one croissant to eat !  Arthur doesn't bother he rests on the radiator and watches what is going on outside in the garden.

Oh, I love that Arthur...the scamp.

The humans here can't leave anything on the counter either! It gets stolen.

Arthur and our Lily have a similar purrsonality. She is always trying to snag something off of our plates! We thought calling Kim a room decoration so funny. Hope to see you for selfies. XOCK, Lily Olivia, Mauricio, Misty May, Giulietta, Fiona, Astrid, Lisbeth and Calista Jo

What is it with white cats? Millie loves to lick anything we forget to hide from him like butter, bread, etc. That is great Kim is staying inside. Everyone looks good.

Hehehe, you wont find that food game happening here, I have strict rules as to peep eating any of mine. purrs ERin. PS I quite like using peeps mobile phone, gives off a nice low heat, and a nice vibration to relax the muscles!

hehehe Arthur is a cheeky one isn't he,xx SPeedy

Arthur thinks his lovely profile selfie makes up for stealing the food.

Everyone looks great! We are really happy that Kim is more social now, and spends more time inside. She did a nice selfie!

Arthur is so funny. What a little rascal he is. :)

Hope you all have a wonderful week!

You've got quite a gorgeous crew there :) Arthur is much like my Bear Cat ... they can't be trusted around any kind of food!

I have a brother, who lives with my mother, who likes to steal food...that's a red one btw :D We love all your Selfies, sometimes they have to be made half-eyed open, or closed, I know that :D Pawkisses for a Happy Sunday :) <3

Uh oh! Somecat is in trouble! ;) Great selfies, too.

Arthur is too funny. I'm sure he keeps you on your toes.

May we display your header on our new site directory? As it is now, the site title (linked back to your home page) is listed, and we think displaying the header will attract more attention. In any event, we hope you will come by and see what is going on at SiteHoundSniffs.com.

I love the idea of a shy and outdoor sweetie like Kim coming inside to be part of the scenery. Here's hoping more cats make that choice as the cool winter months descend upon us!

Jean from Welcome to the Menagerie

Oh my goodness The Case of the Stolen Croissant!!