Since a few days, Rosie and Arthur decided to spend the night with me on my bed. It was a long time that it didn't happen. Mostly it is Rosie alone who sleeps with me. 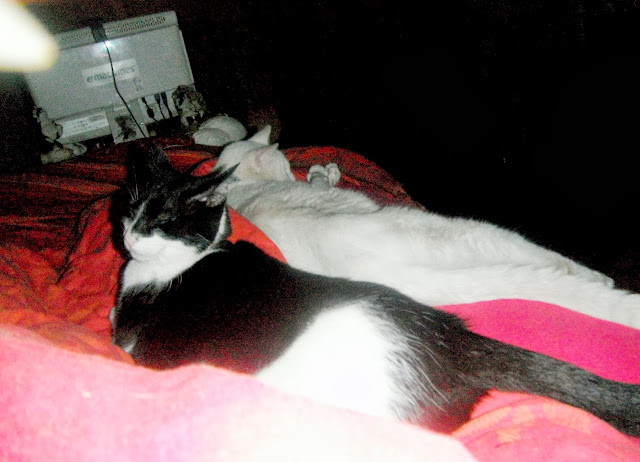 So when I wake up in the morning I have this nice view.

My friend Claudie from the South of France spent a few days with us and fortunately brought sunshine in her luggage ! The cats appreciated her visit very much, especially Pookie as you can see.

One evening, while we were watching TV, we heard a strange noise. A pigeon had flown through the open French windows and fluttered around in the living room ! Followed of course by an intrigued Arthur. It hid in a corner and Mr. G. could grab him before Arthur approached  for a sniff ! 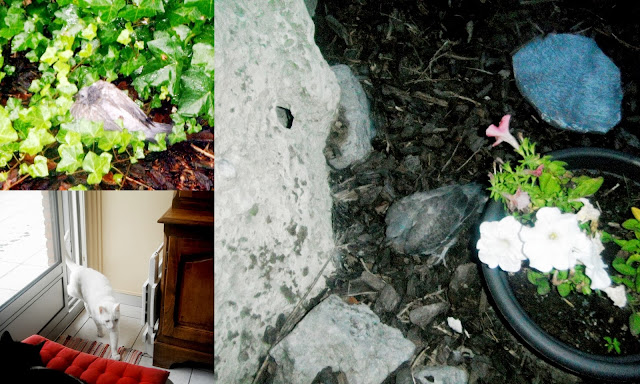 He put it outside in a safe place besides the flower pot and when we looked the next morning it was gone. But the next evening it happened again ! We didn't know if it was the same pigeon,  it landed in the kitchen. Same procedure, Mr. G. took it outside and put it in the ivy, far away in our garden. Unfortunately this one didn't survive and we found it dead the next morning. We suspected Arthur the terrorist, but weren't sure, as a pigeon is so big and so far he had never payed attention to them. We have quiet a lot around here. 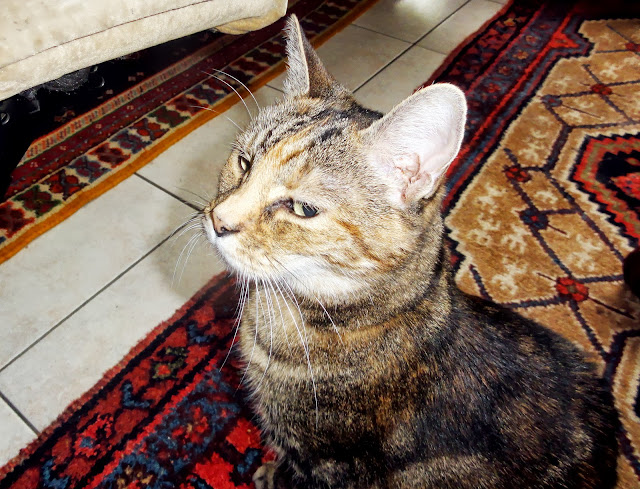 Pookie didn't care, she admired Claudie sitting on the sofa 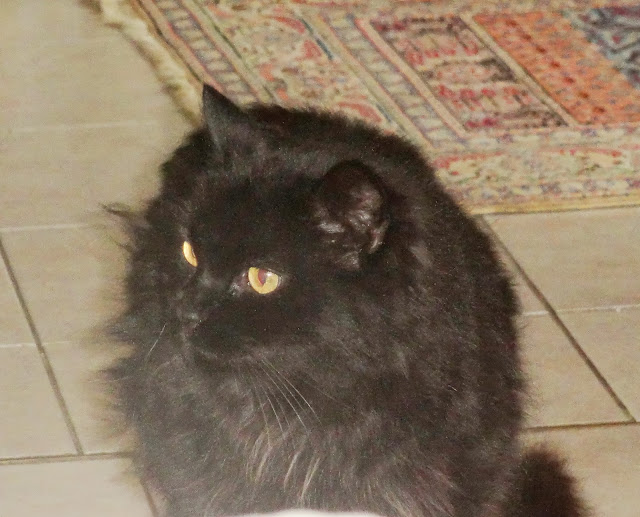 and so did Kim 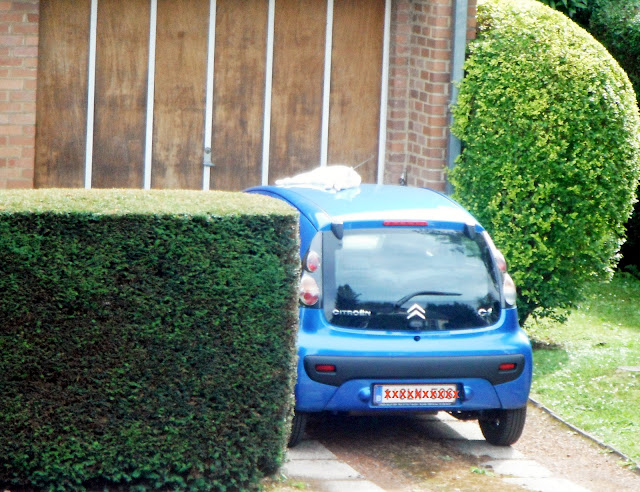 When I looked out of my window this morning, I saw a white bag on our neighbor's car. At a closer look I saw it was Arthur who took a sunbath and probably made some paw graffiti on the roof !

It sounds like that pigeon was on a suicide mission!

You have a very strange look on your face Pookie. Are you admiring Claudie or do you plan to murder her?
Arthur, please don't scratch that very nice blue car.

Love when my cats sleep with me, but sometimes I can't move with one on each side. That's funny seeing Arthur on top of the car roof!

Did you leave your autograph on the car roof Arthur?
Luv Hannah and Lucy xx xx

What an odd thing for the pigeon to do. Sometimes pigeons get sick and confused. So maybe Arthur wasn't the culprit?

How nice to have the cats sleeping on the bed. Luna does that. On the other hand, she would probably be a lot shier around guests.

Poor pigeon. Maybe it wasn't feeling very well.
How sweet that Pookie kept Claudie company on the sofa.
Arthur sure knows a good spot to sunbathe!

That poor pigeon. Must have been totally off colour to be so off course. Love the cat gathering!

Ah poor pigeon. Glad that Pookie has a new friend to cuddle up to!

We feel so bad for the pigeon that did not make it. :(

How nice that Arthus are Rosie snuggled with you. That is so sweet.

Pookie and Kim, we are glad you enjoyed Claudie's visit so much. Especially you, Pookie, as you looks so comfortable with her on the sofa. :)

Aww so cute that both Arthur and Rosie snuggled with you.
To bad the Pigeon didn´t make it :(