CATS ON TUESDAY
Since a week we fell from one extreme to the other ! It was far too cold for the season and now it is unusually hot ! Up to 38°C (100 F) without airconditon it's hard to bear ! 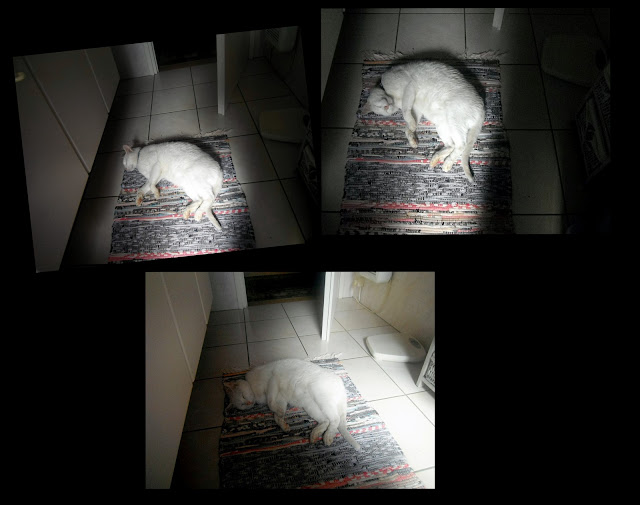 Arthur chose the bathroom and collapsed on the rug, he only gets up when his stomac claims, strangely not so often in this heat ! 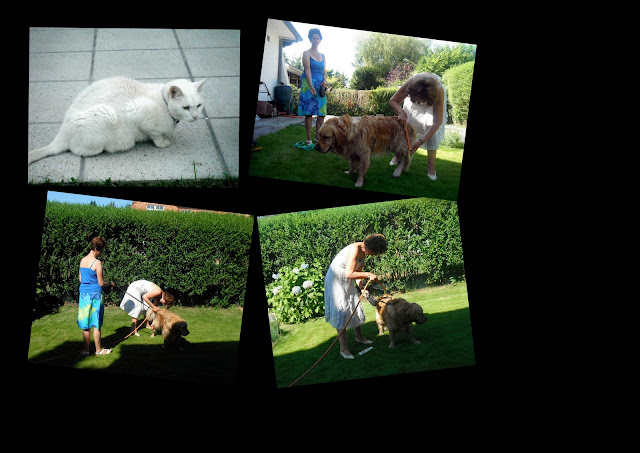 He also watched mischievously through the hedge poor Charly being bathed with the garden hose after he swam in a dirty pond. Arthur only holds his head under the tap, when he wants to drink, but only when he wants ! If we would try to give him a bath, he would kill us ! 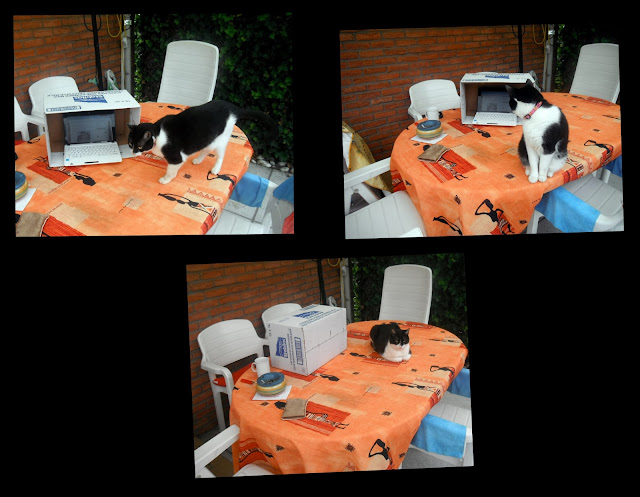 As long as the heat is bearable, I blog on the terrace supervised by Rosie who loves watching me. When I have finished and the box (against the brightness) is free, she uses it as bed. Of course I didn't manage to take a picture of her ! When she saw me coming she jumped out ! 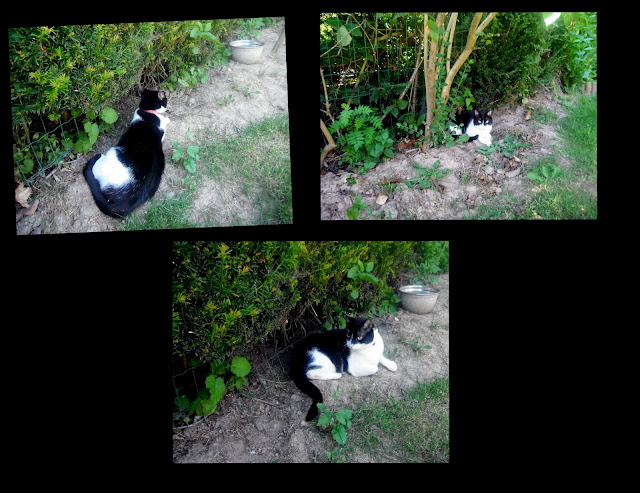 Otherwise she lays under the bushes in the shade and waits for mousies. She managed to kill one this week and I found it more or less in pieces in poor Pookie's food bowl. Pookie was not happy ! 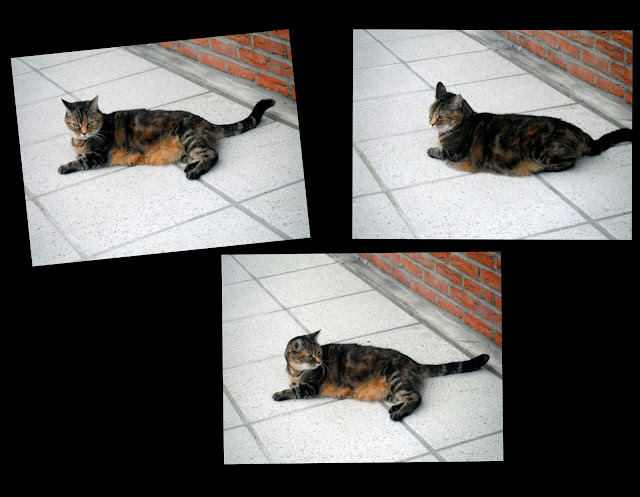 For Pookie, cold or hot, that doesn't make a big difference, she lays around the whole day, and even outside when I am sitting there at my computer ! In a sudden energy attack, she even catched a butterfly !! What an event. Now she has to rest for the week.

gattina: Oh those awesum furry balls. Its nice seeing them doing their own thing.

Can't see the linky this week... here's mine anyway!
http://barbara-wordswordswords.blogspot.co.uk/2012/08/cats-on-tuesday_21.html
It's been too hot to do anything here too - stifling! Rosie, that really is gross about the mouse in Pookie's bowl, and Pookie looks as if she even surprised herself with that butterfly! :O)

Wow! So hot! Arthur is a smart chap to choose the coolest room in the house - the bathroom. And he prefers to bathe a small part of his body only. LOL!

Pookie is a beautiful cat.

Ugh. So hot! Everyone sure know how to pick the best spots to lounge. :)
Our weather has suddenly changed to rain rain and more rain so it's rather cooling (thank goodness!) and everyone's having a fine time creating havoc. Hahaha.

Here the Sptring is coming... and the hot weather too!!!!

I guess our +28 C yesterday is nothing to mention *mol*
We do have a AC in our apartment since we live in a attic with a lot of skylights we couldn´t survived without it !
So you don´t think that Arthur would sit in your lap nice and calm and let you bath him in the tub like I do ?? *mol*

Arthur found a good way to beat the heat, and Pookie looks quite relaxed outside. And Rosie is a good assistant for blogging :)

We hope the heat will break. We finally got rid of our 100+ temperatures. Now if we could get some good rains...

That is so HOT! We hope it cools down at night, at least. We turn into flat cats in the heat, not even a mousie would get us going.

Wow, it IS very hot there! Arthur, you are smart to stay in the bathroom where it is coolest. Rosie, we see you stay busy hunting mousies no matter what the temperature. And poor Pookie ... sorry to hear about the mousie pieces in your food dish! :(

Thank you for your nice comment, Gattina. I´m glad to see your kitties again...
Oh what a nice doggie visit. Charly looks furry friendly.
of cours this weather is too hot for our furry friends.
We had fortunately 23°C today but on sunday it was 38°C here too. We spent the day in the lake on our campground.

A busy week for you all. We like the idea of putting the mouse in the bowl - but perhaps not in pieces.

38C is very hot especially if it is humid heat. Keep lounging on those tiles that will be the coolest spot.
Luv Hannah and Lucy xx xx