This week I had inside cats, because the weather was lousy and cold. They all used the litter box in the garage which stands there for emergencies, but nobody wanted to wet his botty and go outside to dig little holes and have to clean their paws afterwards. 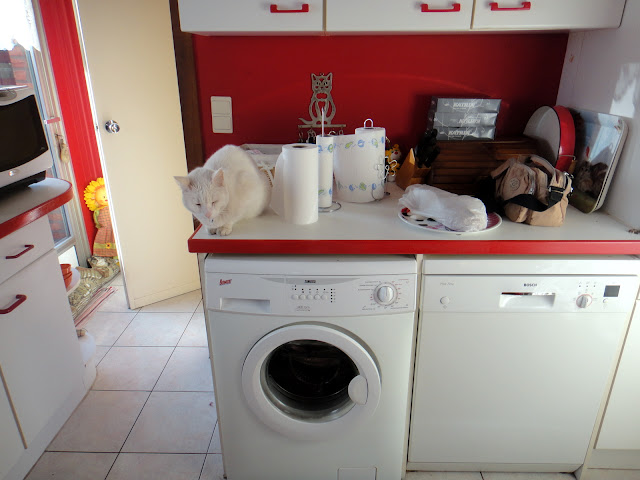 Arthur loves to watch me fumbling around in the kitchen, he takes his most innocent look or fakes to sleep. So when I cut a chicken breast into little pieces and turned my head for a second I suddenly saw a white flash disappearing with a big piece of chicken breast ! He is a great thief. If he could be trained I would learn him to steal Euro banknotes at the neighbors ! 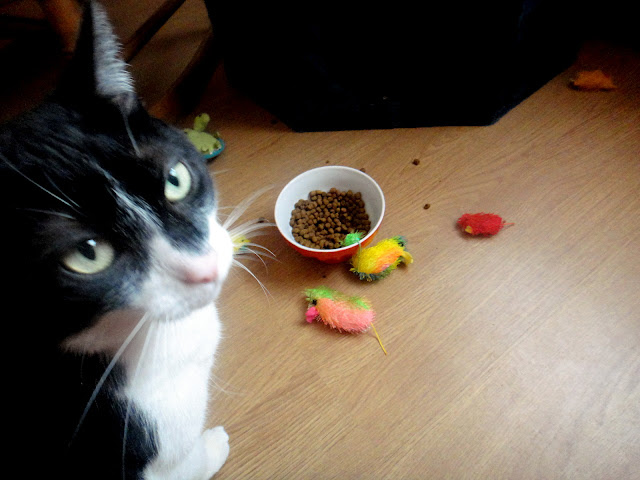 Rosie as a perfect housewifecat still puts her mousies around her food bowl and is very proud of herself. 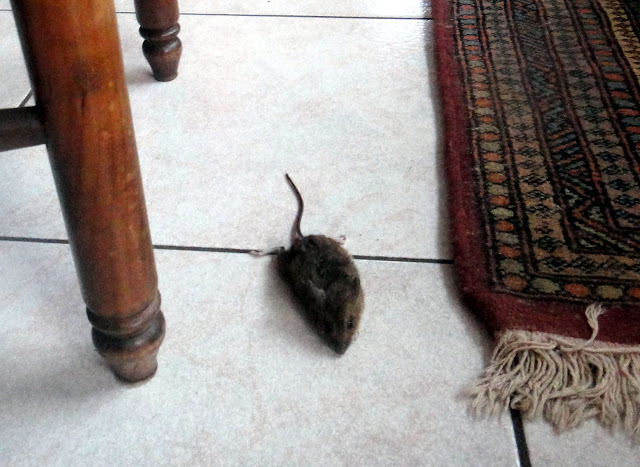 But in the innocent looking housewife a mass murderer is hidden ! She brought us again a real mouse as a gift and left it on the floor. The mouse looked so alive, but was dead, so I suppose it died of a heart attack. Mr. G. wrapped it in kitchen paper and burried it in the bin. Unfortunately there were no flowers inside.

Even Kim was fed up of the cold and humid weather and came to sleep inside. On Saturday I have an appointment at the groomer so please cross your fingers or paws that she will be inside !! The poor thing is full of knots especially under her belly. 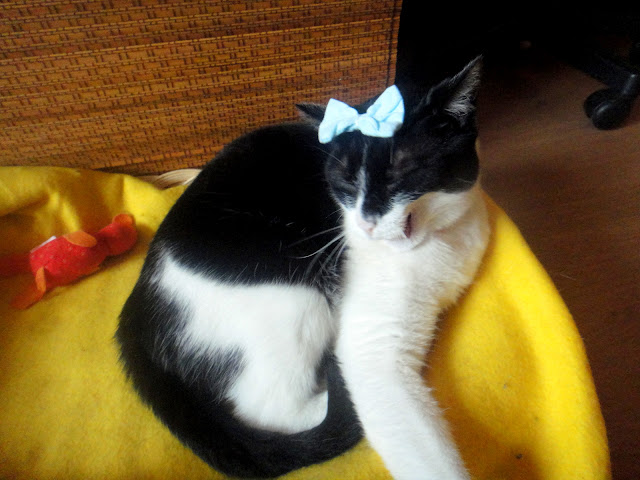 The massmurder housewife poses for me as an innocent girl 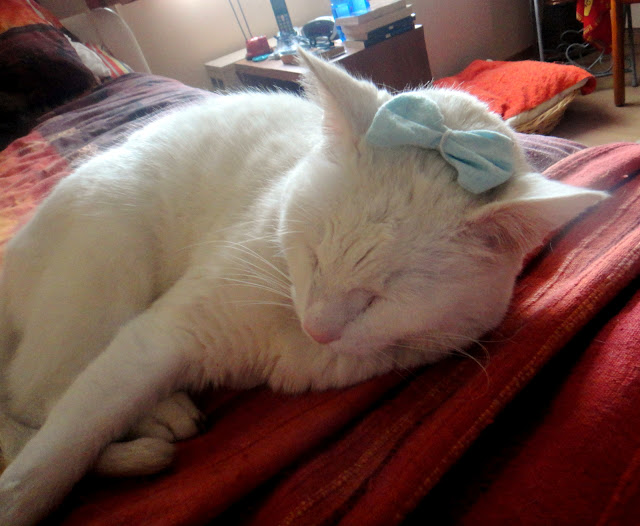 and Arthur doesn't bother that with a bow on his head he looks like a cute lady, when he sleeps you can even put a grenade on his head and he wouldn't move unless of course the thing would explode.

Please leave your link and visit each other !

Oh kitties sorry you have to stay indoors all week because of lousy weather.

We are only indoor kitties and even though mama sometimes leave the back door/screen door open we don't jump out into the backyard. We're scared :)

I think mama believes we don't wanna go outside because since we're both rescue kitties we've had enough bad experience living in the outside.

MOL - Arthur the chicken thief! Rosie and Arthur look so sweet with that bow - Arthur must be very secure in his masculinity to allow such a thing. Hope all goes well with Kim and the groomer!!!

Haha. Ling did an Arthur this afternoon and tried to run off with a piece of raw chicken.
Kim will definitely feel better once those awful knots are out. Stay indoors, Kim!

I would never go out in bad weather. My staff says I do not like having the wind blow up my skirt. I hope the sun shines on you soon!

We have had very similar weather here too. Some days start sunny and very soon the rain and it is cold. All so individual and all so cute especially with the bows..Hope it warms up for you soon... Hugs GJ xx

We like this post very much! Arthur, "The Chicken Thief", you should hide a piece of chicken in the recliner again! MOL! Rosie, "The Mass Murderer" looks so pretty with that bow on her head, and it's so funny how she puts all her mousies around her food bowl! Nice to see Kim, also. Take care, friends!
Buster, Rudy, Sam and Mom Cindy

It's an outside cat day here. My cats like to steal bags of shredded cheese. Maybe they think they're a mouse!

Arthur, we sure hope that chicken was tasty! Did you share it with the others?

Rosie is a mighty huntress.

Good luck with the groomer, Gattina. WE sure hope that Kim is inside, because having mats must be very uncomfortable for her.

Me too put my mousies around my foodbowl just like you do , Rosie :)
I wish that I could manege to catch moore real mosuies ! I have only caught one :(

I hope you will manege to escape in time for the groomer appointment Kim !
As usuall my mom have not the same opinion !

He , He , He Massmurder housewife and Innocent girl *MOL*

Rosie is awesome - that was a great catch!

I now try to pariticipate in "Cats on thusday"
Have a WONDERFUL day.
Big Hug
I like the pictures,especally the last one
Sorry for my english. :-)

oh my sweet friends, I understand your feelings, here in Luxembourg the weather is the same. But think positive...we can take peaceful naps inside home!
*** lovely pictures of you all!
purrs
Luna

Arthur you look so sweet with that bow on your head. I know if you awoke, you would be humiliated!

Poor little mousie. Rosie you do look rather innocent. Are we sure you are the one who killed the mousie Arthur you are fast and furious going after that piece of Chicken.

Never a dull moment at your house, especially when the rain drives all the criminally-minded cats indoors!

We don't know what's funnier...the chicken thief or the mass murderer! haha!
I'm not quite sure I'd know what to do with a real chicken breast! ; )
Katie
...OR a mouse!

Rosie you look so sweet with a bow on your head, you should always wear one.

Haha, Gattina!
They surely steal the scene this week! And Arthur should be trained. I agree ;-) and I won't tell ;-)

Rosie catches the biggest fish, er mousey? An Kim needs to go to the spa ;-)

The ribbon on them was hilarious! Hohoho!

Oh no! real mousies! yikes!
What characters these kitties are! They can look so innocent can't they?!

One of my cats is a real pain to catch and howls loud enough to wake the neighbors. She settles down at the vet's and gets back into her cage willingly. Brat!