I am still at the French Riviera visiting my friend Claudie, (whom I met through blogging) for the second time. 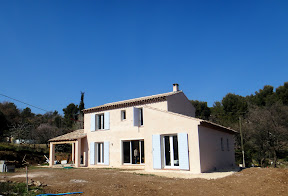 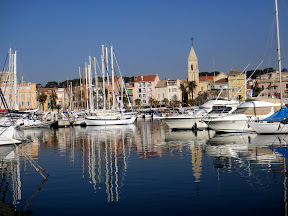 The weather is warm and sunny which is a big change for me coming from the grey and cold weather up north.

Claudie has 3 cats, who she had to leave on the property with her sister while her house was built. 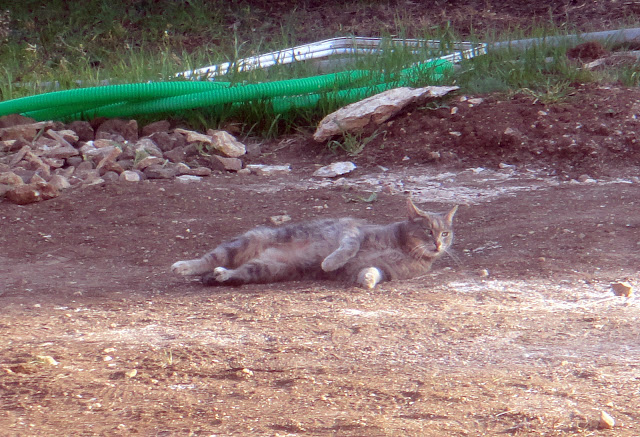 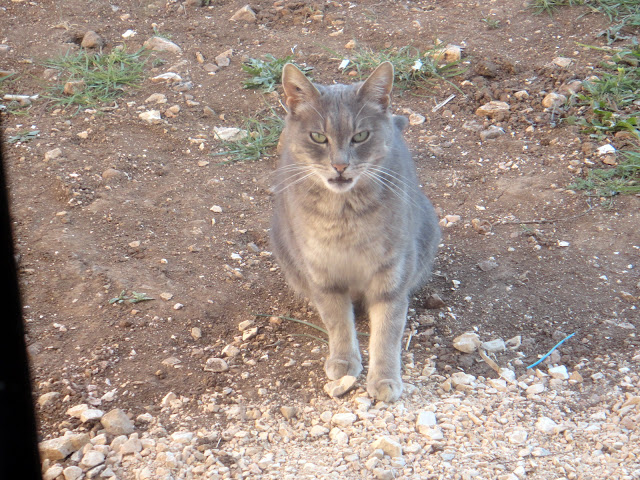 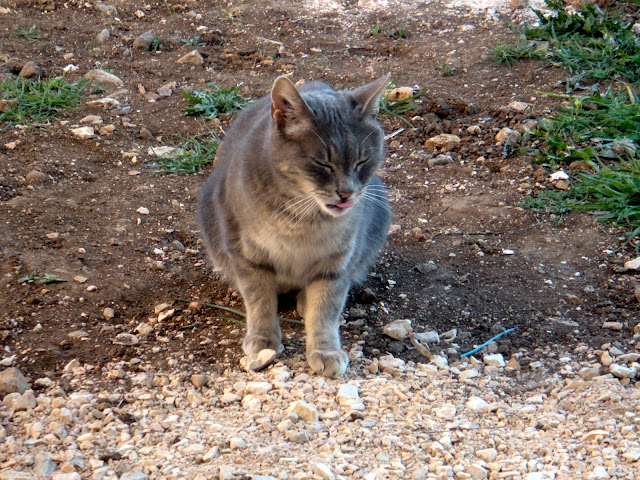 Here are two of them, but I don't know who is who as they look very much alike. Ticoune the female after a while has accepted the new house and moved in again. Pedro is still hesitating but comes often for food of course but doesn't accept yet any approach and doesn't want to come inside. But in a few weeks I am sure he will. The third one I have never seen, still eats at Claudie's sister house and refuses to come down to his new home, which are making them quiet sad. Probably one day he will, when in summer all windows and doors are open. 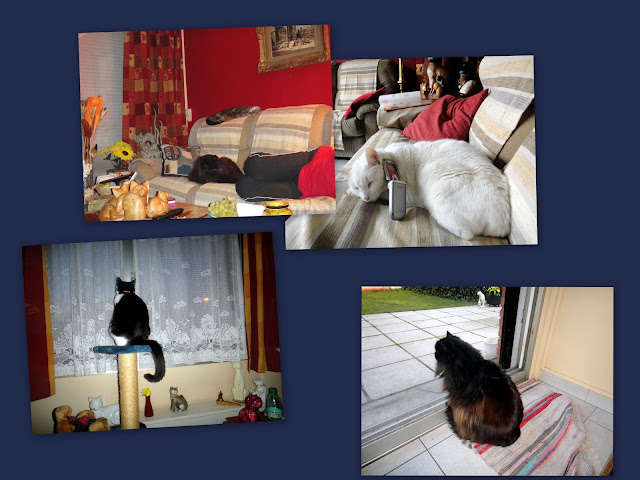 My little monsters at home are well. Apparently only Rosie suffers a bit from my absence, because she is used to sleep with me and now the bed is empty. The others terrorize Mr. G. except Kim of course who still doesn't know if she should sleep inside or outside.

Next Tuesday I am home again.

It is so nice to have friends whom you can visit especially the ones who have cats.

Love your pictures. especially like the ones looking out the window. I always wonder what they are thinking as they gaze at the outside world.

ms gattina lucky you, you are on a holiday again and with little furries to visit too.

I only miss my human when she is away when it is her boyfriend taking care of me. He is a dog human and just doesn't really get me. The pet sitter, on the other hand, is pawsome!

Good to hear Mr G is still under the velvet paw. Bet the cats are stuffed with cream and mortadella..

Very elegant French cats. Do they meow in English or only meow French?

Was Arthur on the phone with you? Heehee.

Ahhh, I do hope your friend's kitties settle into the new house eventually. And I'm glad to see your gang are keeping Mr G on his toes!

Woof!
Oh I'm glad you are going back home soon.I thought you got yourself a new house and new cats! HeavenFurBid!

And I'm glad the gang back home is doing OK!

Enjoy your vaCATion, Gattina, and bring some treats to the cats ;-)

Awww sooo nice weather you have down at the French Riviera !
We are not jealous at all ;-)
Glad to hear that all the cat´s are doing well with just one servant :)
Have a nice week !

Your friend's cats are beautiful. It always takes them a while to adjust to new surroundings. I'm glad you're enjoying your vacation, but I'm sure all your kitties miss you!
Hugs from Cindy, Buster, Rudy and Sam

Have a great trip. Your cats look fine. Whew!

Good to have some day ruling your home
by your own?

After a day I miss mum so much, and long for her return. Good to have her back from Madeira!

I hope you don’t return to carnage!!! Great pics :)

It sounds like you are enjoying your holiday very much, Gattina. So nice that you have cats to visit there, too!

We are sure your own kits will be pleased to see you when you get back.

The best kind of places to visit are places with cats.. Enjoy... Hugs GJ xx

I wish I was there to meet the new kitties!
~Trish

What a great blog! Being an animal lover (especially cats), I very much enjoyed my visit.