This time I have a rather sad story to tell, fortunately with a very happy end. My friend Ilona walking through the woods was approached by a man with a dog running after a couple who had just left a cage with two white cats on the path in the woods.

He couldn't take the cats because of the dogs, so Ilona took the cage and then they both scolded with the people. Unfortunately they didn't think of calling the police. Ilona carried the cage with the two cats home and raked her brain to find a solution for them.

She couldn't keep them, because she has already a cat and she had not enough room for 3 cats. She didn't want to separate them either because they were cuddled together and it was obvious that they had been together ever since. She didn't want to take them to an animal shelter either, and tried to find them a home. She called me, I told her I will help to find somebody. She called her sister and her son, but both couldn't take them either. Finally her neighbor told her that in her street was a real "cat lady" living.

She walked over and came back with the lady who wanted to see them. 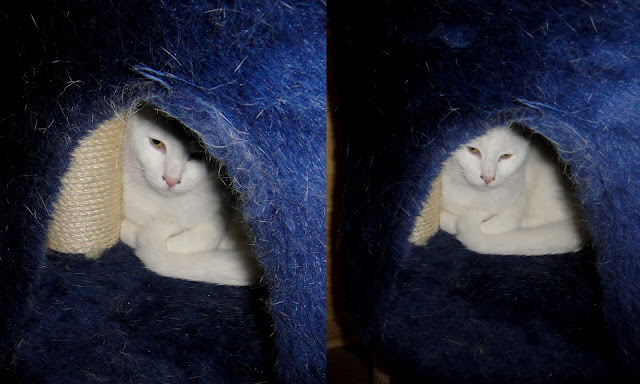 As they found out later these are two boys, around 7 months old and recently spayed, not more then two weeks ! This one looks like Arthur and has also yellow eyes. I think he is now called Max. 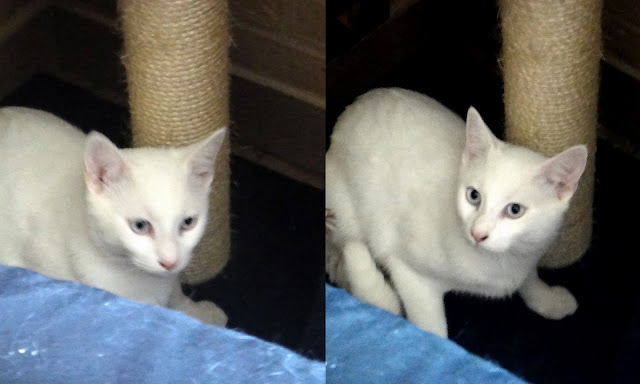 The other one same size has blue eyes. They both looked very healthy and well looked after. The cat lady without hesitation took them home, and the same evening her husband went with them to the vet. That's why they knew how old they were and in which health. She had already rescued 7 cats and with these two now she has 9. The one with the blue eyes is now called Snoopy.

It's still a mistery why these cats had been abandonned ! 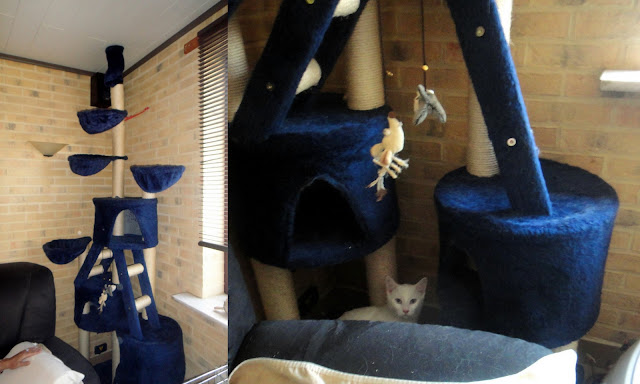 The whole house is adapted to make cats happy ! A huge cat tree sits in the living room and little Max looked at me. After one day, they already felt home. The cat lady was so adorable and let me take pictures, offered coffee and showed us around. 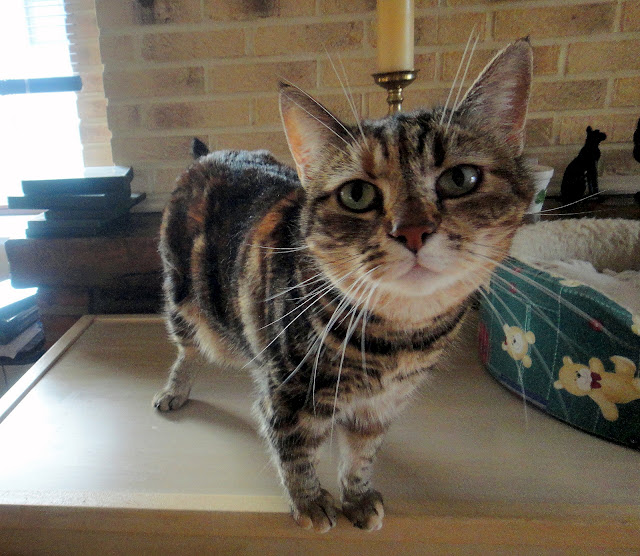 One of them greeting me in the kitchen 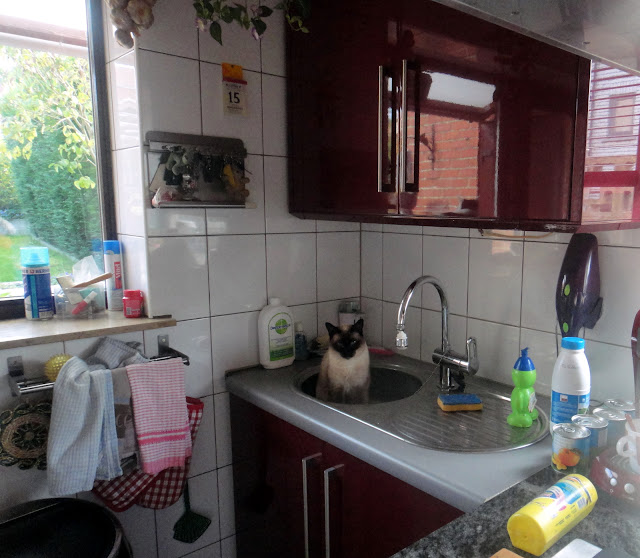 another sitting in the sink 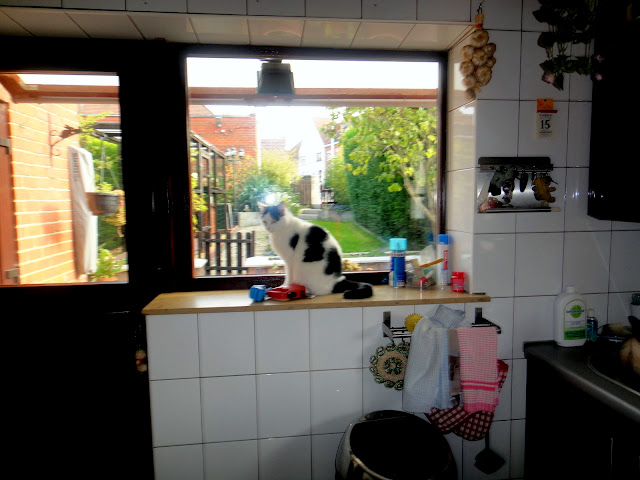 First sitting on the window sill (in the background you can see an enclosure like in a zoo, for the cats when it is warm outside) 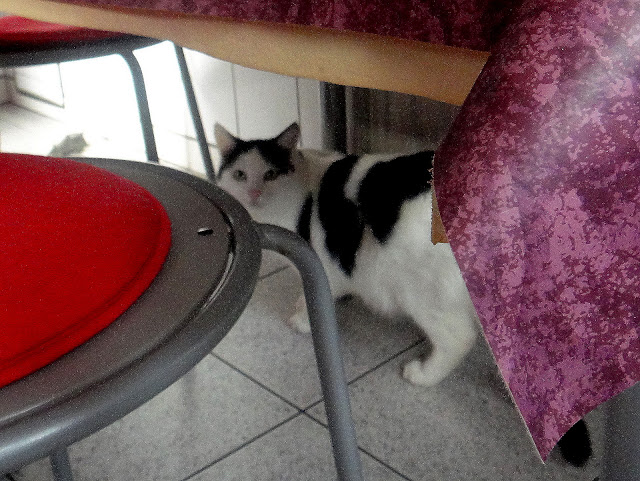 and then hiding under the table 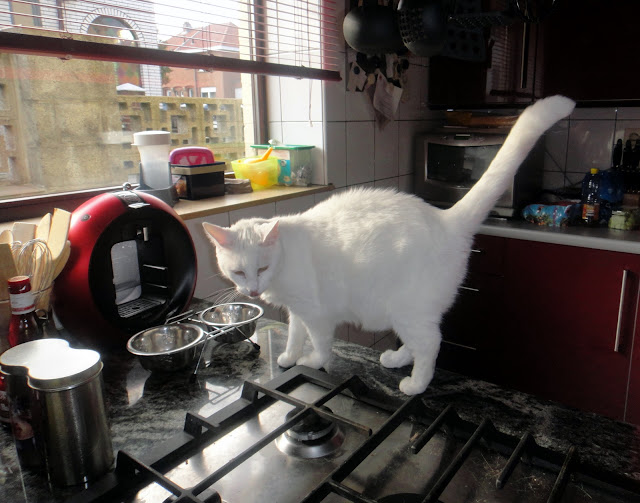 This cat is not Arthur either, but she had already a grown up white cat as friendly as Arthur ! 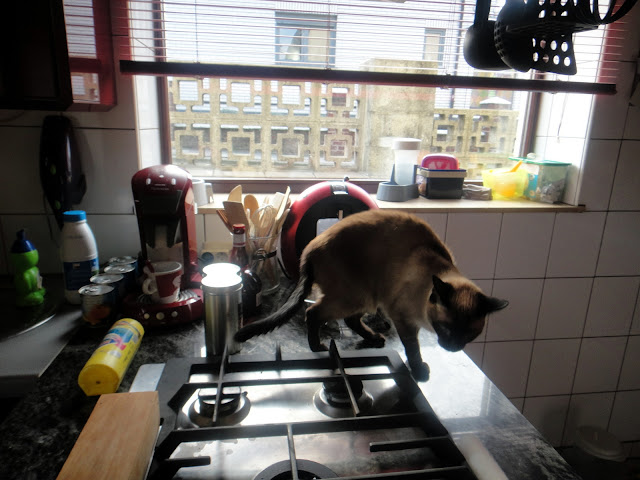 and another one on the oven. Apparently the lady and her husband's hobby are cats and everything in the house is for cats. We were so happy for them Ilona and I, that they had found such a good home, almost a cat paradise !

At home I had again troubles with my Arthur. He didn't eat again. I tried to find out what he could have eaten, but saw really nothing. Suddenly I remembered that I had put Frontline on his neck, against flees. Maybe it was that ? Because he didn't eat anymore last time too. I asked the vet and she said that it is possible that he got it in his mouth by leaking his collar.

So we went to the vet and he got a shot again. As last time he refused to get out of his cage and she had to give him the shot through the grids. 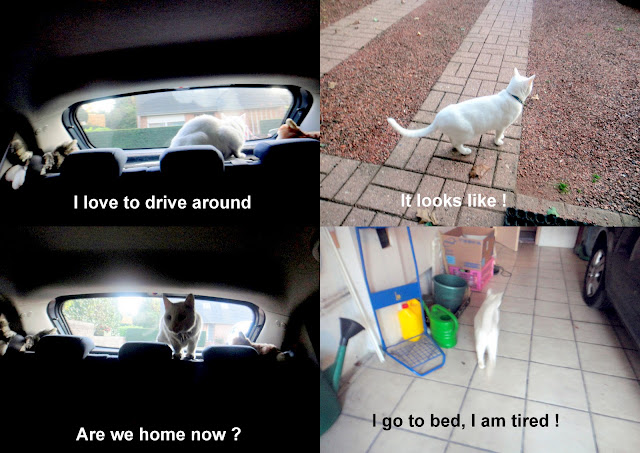 In the car I let him free, he loves to ride ! 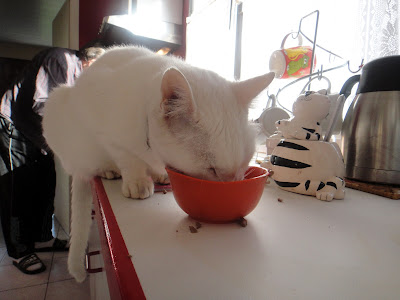 and the next morning he ate like a horse again ! 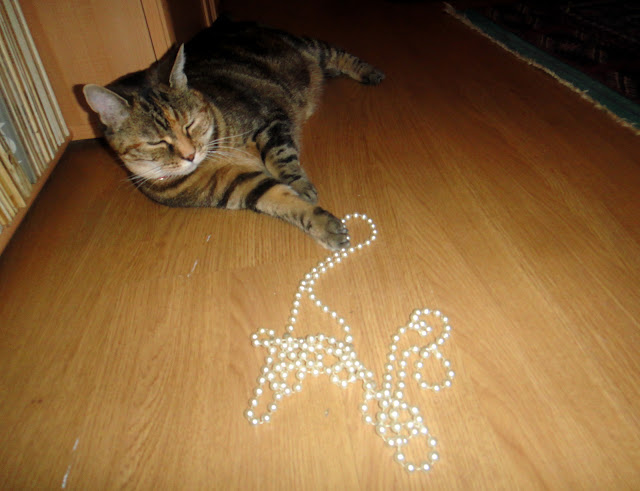 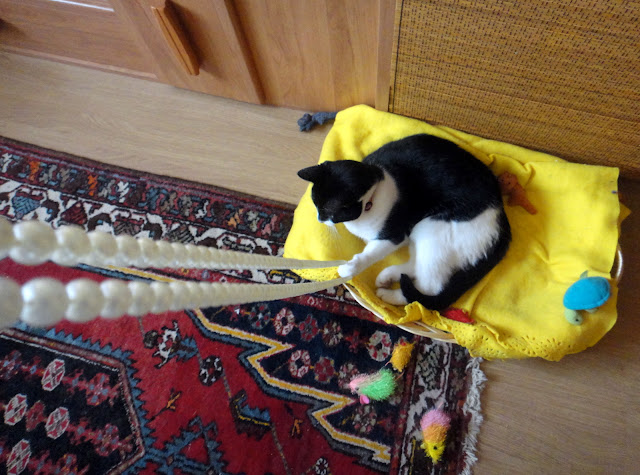 I needed a picture with perls and asked Pookie and Rosie to model. Here is the result !

Hello Gattina, I'm so glad the sad story had a happy ending! Bless that couple for taking in two more cats! They are beauties! Poor Arthur, so sorry he had to go to doctor and get a shot! It looks like he's recovered from it though. Thanks to Pookie and Rosie for modeling the pearls! Nice post!
Cindy, Buster, Rudy and Sam

What an odd story! Maybe the cats are deaf? Anyway, glad it had a happy ending. And you've finally discovered what bothered Arthur. So glad to hear that. We're using Revolution at the moment which is similar.

bless that cat lady's heart. may her tribe increase. the whities are so cute. so glad they found a home.

What a happy ending to the story! They are beautiful white cats. How could anyone abandon them! I think you're right they have found a home that is a cats paradise.

I'm glad that Arthur's eating again.
I love all your pictures. the one with the pearls is so cute!

I'm so glad they found home so quick, sound like all of the sudden which is good ! They are very lucky kitties !
Thanks to the lady to took them all
Purrs

That was awful of those humans to abandon those two handsome boycats like that! I'm glad they found such an awesome home - heck, even I might want to live there!

It sounds like you may have discovered the source of Arthur's troubles. I hope so, and that he will be fine from now on.

What on earth is it with people? How could they abandon those lovely boys? Am so glad they found such a great home though - that cat tree is amazing! Poor Arthur, hope he keeps eating this time. And that picture of Rosie with the pearls is awesome, such a great pov!

That is so great the ending is happy~~~
I am so pleased!

Hello Gattina,
that is so cruel to bring those white cats into the wood. They are so extra jeopardizes by their white color to be killed by animals. I can't understand that their owner din't made any effort to find new parents for this well cared cats. What a luck, that the cat lady took them. And what a luck, Arthur is eating again.
Best greetings, Johanna

Oh my goodness how could they leave the poor darlings like that and thank goodness they were found and that you were able to get them such a brilliant home. They will have a good life there for sure. Poor arthur not eating again I am glad that he is once again back to normal and hope it stays that way.. Hugs GJ xx

Hi !
Me and my mom is sooo happy that this story ended with an happy end for the two white cat´s !
We can´t believe that anybody could be so cruel and put them out in the forrest in a cage , makes us very sad :(

Glad that Arthur is back on track again after another shot :)

Pookie and Rosie doing a great job displaying the pearls :)

Have a happy tuesday !!

That's so sad that those two beautiful white cats were abandoned in the forest. But I'm glad the story has a happy ending. It seems like their home with the "cat lady" is a great place.

Thank goodness there is this very happy ending! Those handsome boys have a great home now, hope they forget all about the others a.s.a.p....

I'm so happy that such a nice loving woman and her husband were able to give a home to the abandoned kitties! I'm also glad that Arthur's back to normal and eating again!

What lucky kitties. To be dumped and then to have found such a wonderful home. The people who dumped them on the trail should be ashamed of themselves.
Glad Arthur is feeling better after the shot. I hope he didn't try to bite the vet this time?

I am so very happy that those two beautiful kitties found a home!

I am glad that you think you found out what Arthur's problem was and ooops, you also reminded me I forgot to give Dakota his Frontline in OCTOBER! OOOPS!

Sop relieved to hear the story had a happy ending. How cruel to abandon cats that way ~ the only consolation is they were better off with out such a callous owner.

We're so glad Arthur is ok now. And the pearl photo is awesome!

We are so glad that Max and Snoopy have landed on all four paws in a brilliant new home. A happy ending to what could have been a very tragic tale.

Poor Arthur, maybe it is the Frontline that is the problem, Jet doesn't react too well to the worming liquid either. Glad he is better now and eating again.

Pookie is very clever drawing a kittykat shape with those pearls.

Rappy allowed me to enter the blog and comment but now I must follow orders and 'go wash my head fur!'

What beautiful white cats - we are glad they are still together.
Has Arthur developed an allergy to licking Frontline - it's so strange to suddenly develop. We are happy the vet gave him a shot and he is OK today.
Luv Hannah and Lucy xx xx

what a happy ending to a sad story. glad that arthur is eating again. purrs, Rio from Barcelona

Dear Gattina,
I LOVE happy endings!
purrs to you all
Luna

We are so glad that the story of Snoopy and Max had a happy ending. How terrible that they were abandoned like they were, though.

We are glad Arthur is eating again, and love the pearl pictures! :)

I think the silly cat in the cage has made my Sunday so much better! I wrote a story about a guy who meditates under piles of cats if anyone is interested:
http://gabfrab.wordpress.com/2011/11/06/cardboard-blankies/