When I came back home on Saturday, no cat was in sight. I thought they were all offended because I dared to leave them, or they are not happy about my return with all the treats they got from Mr. G.

The first one showing up was Pookie who usually ignores me for 3 days, but this time she showed her joy by running through the whole house and turning all rugs over. 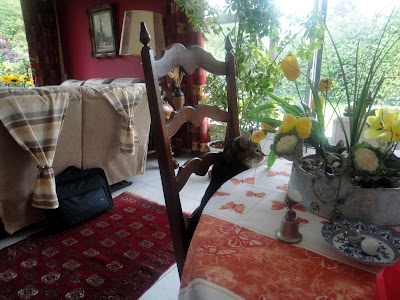 when we had supper she sat with us at table 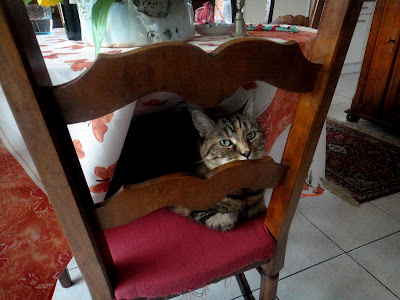 and was maybe a little disappointed that we had tortellinis filled with no meat, only cheese and spinach. But she didn't show it of course. 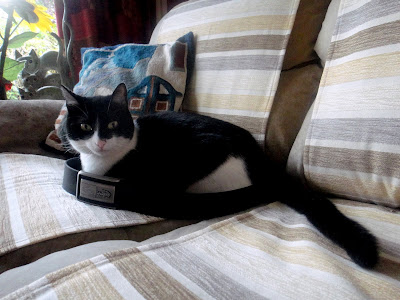 Rosie came later, and didn't show any reaction, but during the night she woke me up several times to purr into my ear, or sleep walking on me. Dominique had bought a belt for Mr. G. to thank him for taking care of her house and birds while we were away and Rosie found this place absolutely great and I thought I could use this picture for a Lacoste advertising ! 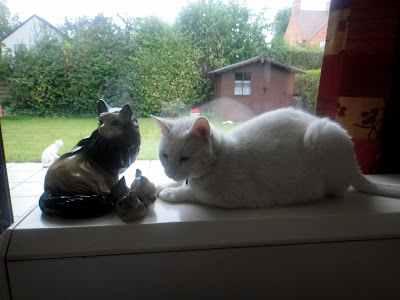 Arthur had no reaction at all, he looked at me stated that I am back and continued his nap. 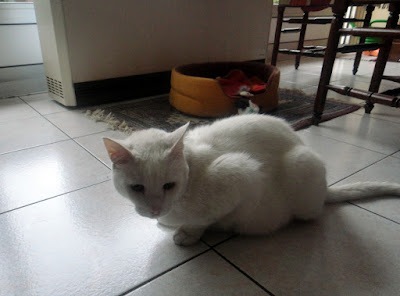 He too was a little disappointed about our supper.

Mr. G. had some adventures with Arthur. He was waiting for the water boiling to put his pasta in, when after a while he noticed that "somebody" had switched off the button. As I the usual culprit was away it could only be Arthur or a ghost. As Mr. G. doesn't believe in ghosts, it was Arthur.

While watching TV, he suddenly saw that something was recording. As there was nothing on TV worthwhile to be recorded he checked. Arthur had choosen to record the News while he slept on the remote control and had probably pushed on the "rec" button.

Since my return it's me of course again, when something strange happens !

Oh my Emma ignores me for a day but Buster can't contain his joy when my husband and I come back from a vacation.

What a welcome, I'm glad the cats are still speaking to you. As for Arthur, LOL!!

I wish I could ignore my mom when she has been on the run !!!
Glad that you cat´s didn´t ignore Gattina the whole day !!!

Awww ... I thnk they were all pleased to see you in their own individual ways.

Arthur is the King of Cool!

So glad you made it home safely. Rosie is quite the fashion model, she could definitely be a "spokes-cat."

Welcome home. Well, your cats welcome you back in their own special ways! :)

Looks like some cat has been feasting on LOTS and LOTS of treats and mortadella! :)

That's really funny with Arthur turning on the record button and switching off the stove! I sleep with a CPAP machine and it would go off in the middle of the night, waking me up because I couldn't breathe. At first we thought there was something wrong with the machine but soon realized it was Indigo sitting on the button during the night! Ted built a platform to go over the machine and haven't had a problem since. :) Rosie has an instinct for how to pose in just the best way possible. Welcome back from your vacation!

Welcome home. Arthur's misadventures are always fun to hear about. And that photo of Rosie with the belt could definitely be used for an advertisement.

Wonderful cats!:) I really love them!:) I am a cat lovers, and have 5 wonderful cats at home!:) Have a nice evening!:)

Welcome home, Gattina! We're sure all the cats missed you ... they're just playing down their excitement. :)

Oh Arthur! What a clever kitty!
Oliver used to run away for us for a few days after we'd been away, but he no longer does this. (He's almost 10.)
Welcome home!

Arthur is a sensible cat - with all that snoozing he needs to record the news to stay up top date :-)