Instead of spring we almost have summer weather ! Late morning we already had 20° (68 F)! 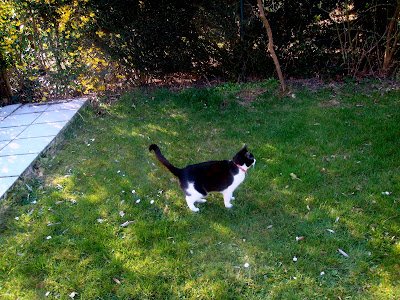 Of course Rosie is exploring the garden, looking for other mousies than her green and red once. So far she didn't have any success. Good for us because she always brings them inside. 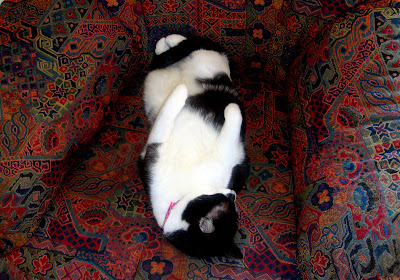 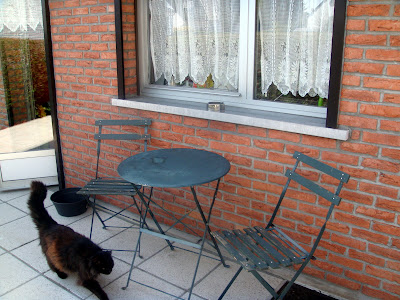 For Kim it's no change as she is always outside, but at least now, when I am also there she comes to say hello, and Mr. G. is even allowed to brush her ! Unbelievebale the package of hairs coming out every day, although I had been at the groomer with her not even a month ago ! 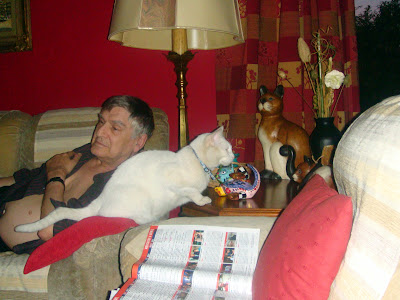 Arthur likes it complicated, here he takes a nap half on the sofa and half on the table, while we watched TV. 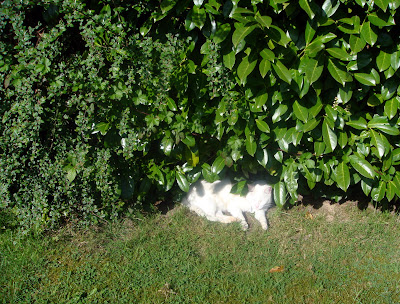 He too is mostly outside and takes sunbathes like here, but he has also found something else to do !

Since my neighbor's dog Yanouk died in August and Dominique leaves her terrace window door open, Arthur has found a private TV with a special channel only made for him. 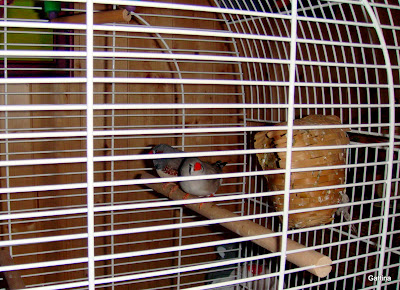 He goes inside Dominique's living room and sits there in front of the table where her two little birds are chirping in their fortunately huge cage. So far he is only watching and the birds don't bother, I only hope that he will not jump on the cage some day. Anyway Dominique gently chases him outside, but Arthur is like a boomerang, he always comes back. A few days later she found him peacefully sleeping on her bed on the second floor ! 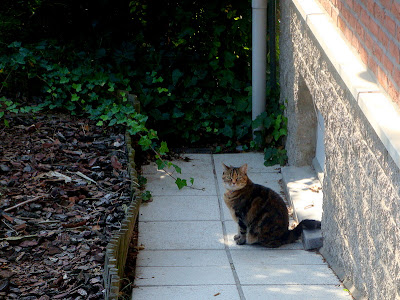 Despite the warm and sunny weather Pookie prefers to sit near the cat flap, in case there would be a catastrophe, she only stays in the garden when I am there too. She really is a self chosen inside cat !

Ha! Silly Arthur, do you think he'll move next door? We are all shedding bales of fur too!

I'd really like to join you in exploring the lawn and after we could nap together and dream of cat princes... But the mouse hunting part I guess I'd pass...
Purrs and love.

Arthur! you sleep on the neighbours bed? What a cheeky cat you are. I hope you don't bother her birds too much.

Wow such nice weather you have !!!
Here it was sunny and about + 13 yesterday.
Today when mom is having a day of it´s raining :(
But it means that we have timme for visiting friends instead :)
So you are just watching the bird ??!!
I guess I would have tryed to eat it :)
Have a happy tuesday !
P.S Mom has combined Cat´s on tuesdaypost with my post on my first catshow. We have been writing in Swedish but checked the google translation in english and think it´s working really well today for a change :)

Please send your warm weather here. I am so tired of winter.

Arthur made us smile. We can't believe how cheeky he is. And when he is half on half off the chair ~ hilarious!

i am sharing my first post fellow cat people. thanks for the invite.

Arthur just makesus laugh and he is so cheeky. I hope he does not get in the cage though. Hugs GJ x

We missed you yesterday as our internet connection was down. I love the way your neighbour loves Arthur. And Kim is looking so good!

Arthur, you crack us up! Glad you are all having some nice weather (it's been very rainy here). :)

Hi Kitties! It is good to see you all now that we can visit again! We have to agree with some of those comments above - please send us some of the warm weather!

The best naps, and snoozes, are the complicated ones! ;-D