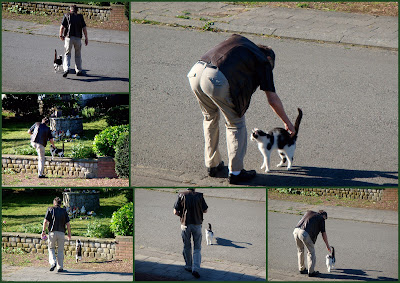 Our neighbors are on holidays and Mr. G. takes care of their cat Chouchou. Each morning and evening she waits for him as if she had swallowed an alarm clock, punctual at 9 AM at 5.30 PM ! Usually Arthur follows, but of course when I need a picture he is not there. 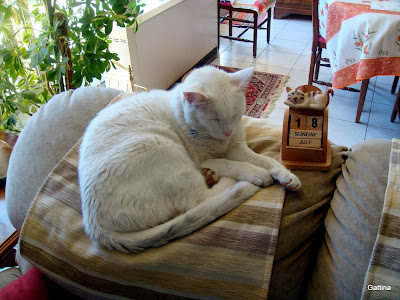 Since the weather cooled down and has changed, he spends his days always at the same place, that's why I put a little calender besides him so that you can see that the photo is new, unfortunately the year is missing, but I swear it was this year. When he doesn't run behind Rosie, or disappears for rounds to the neighbors, he sleeps at this very spot. I don't know for how long. 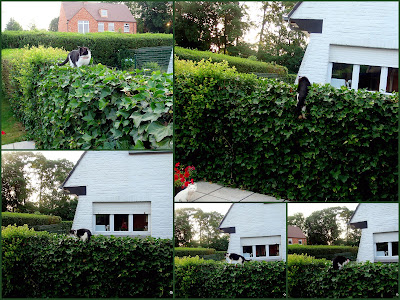 Rosie has discovered a new thing to do, that's climbing on the hedge. Usually Yanouk (the dog) is on the other side, but he too is on holidays, so she walks on the hedge. That's also an occupation. 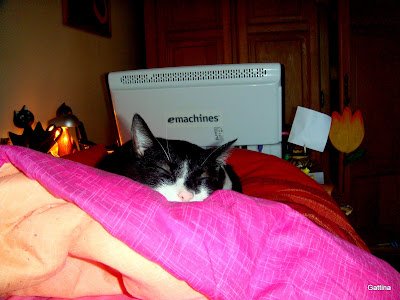 But mostly she keeps me company when I am sitting at my computer and does her 24 h nap. 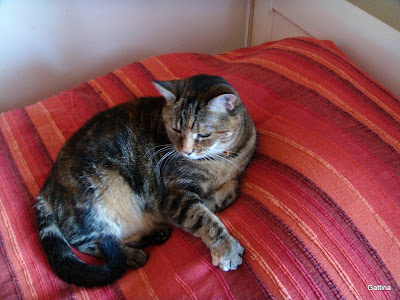 The same with Pookie, she too is always at the same place, Mr. G.'s bed and looks cute. That's her job she thinks.

Well Im glad that the weather has cooled down, and I can see the kitties are more comfortable now. Ahhh how I love being a kitty, spending the whole day, roaming around, sleeping and eating!

Good to see Arthur is keeping up his marathon snooze operation and that Rosie is trying out new things. Hedge-walking - it's a real cat sport.

Awww, it is obvious Chouchou look forward to see Mr G.
Arthur has already marked his sleeping spot! :) Are those stains on his tail?
Rosie is like a tight rope walker walking on the hedge. Not an easy walk!
Pookie is a cuddly plump cat. Bet she is nice to hug!

Well it looks like they are all living life to the full. We love the pic of Rosie on the hedge ~ atta gerl!

They look so sweet. Rosie is so brave to walk the hedge; heights must not bother her. Pookie is, indeed, cute sleeping. Arthur is, just Arthur. He has a serious job to do, too. My animals say this sleep thing is exhausting.

Rosie does look so tired in the sleeping pic, all that hedge walking must be exhausting! It's so nice that Mr. G takes care of the kitties for the neighbors (and that Arthur supervises of course.)

Snoozing is an honorable profession, and a good place to sleep deserves respect!
We loves your picture, Specially Rosie on the hedge, how does she do that? She must be a very skilled walker.

I had to laugh about having a calendar next to Arthur so people would know it's a new photo. I should do that with Lucy. Almost every picture of her is of her in her bed, just a new day.

Rosie and Pookie are so cute and pretty. Yes, Pookie is very good at her job.

It's so nice of Mr. G to take care of the neighbor's kitty.

Wow, 5:30 in the morning! I used to get up at that time every day to help my daughter wake up for school. Ugh! Cats are definitely creatures of habits...love to sleep at the same time in the same places, at least that is true with our gang!

It looks like the cats are all being their true creatures of habit (I guess I'm not the first to say that here).

5:30AM is quite early! I was getting up early naturally for a few weeks (6:30AM), but that no longer seems to be the case.

What is it about cats and their favorite places?! Hedge-climbing?! What a great new sport! Rosie is very talented!

It is good that Mr. G can sleep in and then go to Chouchou. She is a good kitty to wait for him.

Arthur, you have to keep your areas well used or some other cat will take your place!

bonks and cooler days and sunshine too. Here it is HOT