We arrived at 1.30 am on Saturday fom Morocco and Mr. G. was waiting for us at the airport. Of course he complained already in the car how much he had been terrorized by his darling cats.

Each morning at 6, Arthur with his weight and elegance of an elephant jumped on his belly and meauwed a morning song. Pookie disturbed in her sleep hissed and took Mr. G for a formular 1 racing ring, before she fled into the kitchen. This sweet wake up procedure marked him terribly. Therefore he was happy that I was back so he could sleep in peace .... and longer.

He also had a scratched arm and belly. As usual Pookie was sleeping on his soft round belly hill, but Rosie had the same idea and wanted to share a part of it. They had a fight on Mr. G and the poor man got scratched.

With bravery he survived it all and I am not yet widow. My holidays in Morocco were just wonderful and for those who are interested to see some pictures have to go to my Writer's Cramps blog.

Before I went to bed after my arrival, I only was greated by Rosie who purred and followed me immediately in my bed. 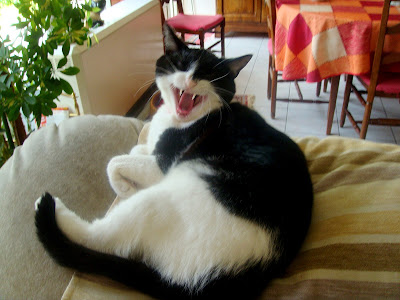 The next morning she already was bored by my presence 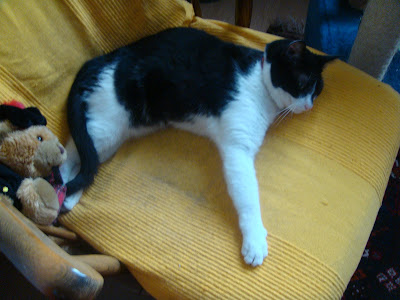 and returned there where she had spent the last 12 days of my absence. I noticed the hairs on the seat, I could knit another Rosie out of them. 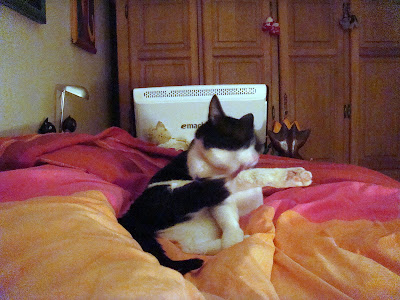 Then she returned to her daily occupations 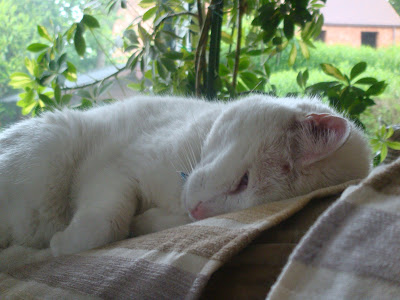 Arthur, to great me just opened one eye. He was tired, as the weather was nice he had done his rounds during the night. 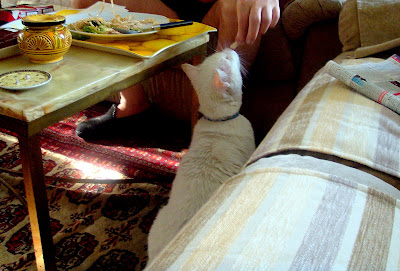 anyway, Mr. G's food is far better, because what he gets from me is too healthy. 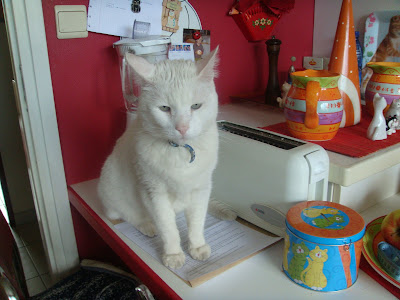 Apparently he deeply considered the pro and cons of my return 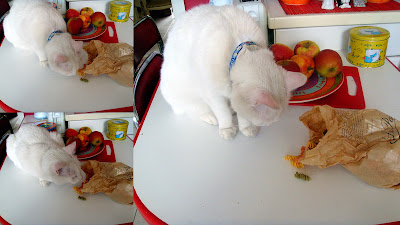 Mr. G. had left fresh pasta on the table and that was far more interesting then I. 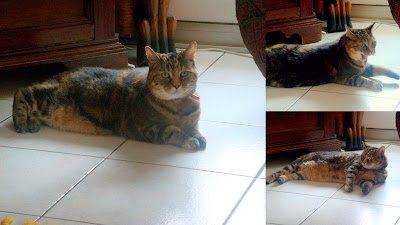 For two days Pookie ignored me or ran away, as she always does when I come back. She is offended. Now she is back to her normal self and cooled down on the tiles. 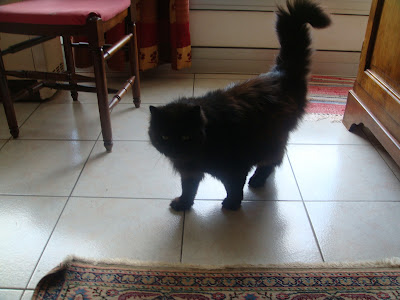 Kim throw a terrified glance on me 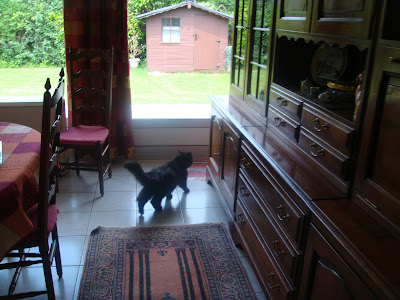 and disappeared in the garden ! She probably didn't recognize me anymore. Kim is a little special.

There are lots and lots of cats in Morocco everywhere. Everybody or nobody feeds them mostly they look good but some really pitiful. They are not spayed and have lots and lots of kittens. They are not badly treated, it's just ignorance. Mohamed apparently loved cats and had some and he even cut a sleeve off his robe not to disturb his cat. 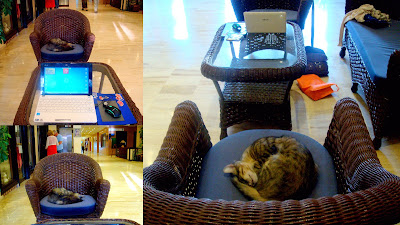 Even in one of the hotels I spent the night during our roundtrip, my seat was occupied by one of the hotel cats, when I just had installed my computer. I took the other seat ...

Poor Mr G, all the cats love and fought for his belly? LOL!

Oh they'll warm up when they're hungry... haha. It's funny how aloof
cats can be when they've missed you.
Hope you had a great trip!

Oh, Mr G!!!
How funny kitties can be! My Oliver (who looks a lot like Rosie) will stay away/run away from us after we've been gone. Although at age 9, he is doing that less and less.

I forgot to say--In St. Maarten,NA, there also are cats that wander around. We had one cat in particular who liked to visit us nightly on our balcony.

Welcome back dear Gattina!
What a fabulous trip, I want to visit Morocco someday, it's in my dream list here!
I think it's normal the catfriends were missing you so much and they wanted to get your attention after your trip.
Adorable pictures, my favorite is Arthur greeting you with one eye opened, so CUTE!
Happy Tuesday !
purrs and love
Luna ( and mommy Léia )

Welcome home, my dear! I am still in Berlin, and will not be home until the weekend, but wanted to say hello!!!

Poor Mr G - how he suffers!

Fun to read how you get the gamut of cat reactions to your holiday. Guess you're forgiven now.

Muhammed was once saved from a snake by his cat, hence the muslim attitude to cats.

When you said you could, "knit a new rosie" I laughed because that's sort of what my post is about.

Welcome back! How sweet they all treated you differently. Love Arthur's expression!

I just love Rosie's yawning picture. YOu don't fool me--I bet Mr. G. spoils those babies more than you do!

Oh I see now, Mr G stays home and looks after the cats. You have four? That's WONDERFUL! I will post on this blog if I may about my six cats in South Africa and my new Sudanese cats. Hugs Jo

I love the photos! I am so glad you had a good adventure to Morocco and are now back home. It feels good to be back again with your babies. You know Mr G now knows what work you have every day all day, every single day no matter what. You are like a nurse maid. It is good that he lets you go away and he tries very hard to make it perfect just like you so the kitties do not suffer.