Since we have the ash cloud from Iceland hanging over Europe, the sun is shining over Belgium and the sky is blue ! Over 6 million people are blocked in airports all around the world, but my cats enjoy a plane free sky !

Even Rosie who doesn't go out at least not alone, sat for the first time this year on our garden shed and watched over the garden. 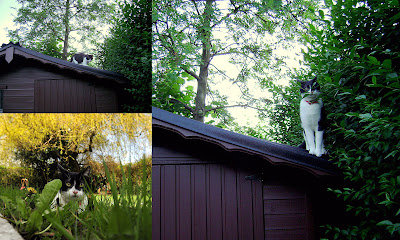 The grass smells fresh and there are plenty of little insects inside to chase around ! 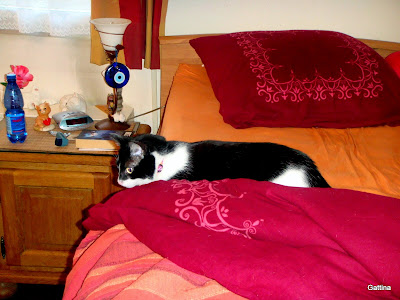 After a nice walk outside she settled down in my bed again and kept me company while I took care of my cold ! 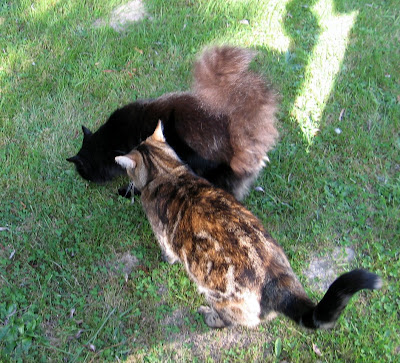 Pookie too dared to go outside for a bit and met her sister Kim who is always outside. 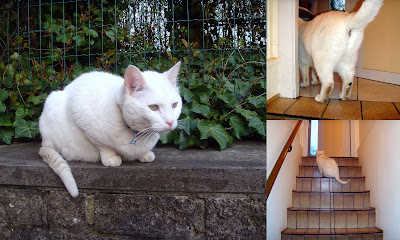 With Arthur it's another thing, we almost don't see him anymore or just like that on the steps when he hurries up from the basement to the kitchen to his food bowl. Otherwise he spends his days I don't know where, probably napping in a neighbour's bed and accepting treats. I suspect that he is fed from everybody, because he doesn't eat very much but gets fat and fatter ! His favourite place now is sitting on the little wall in the sunshine and observing what is going on in the street.

Hi Gattina! In 1980 a volcano blew there was the same thing here in US. There was an ash cloud also and it
left ash across the US. Rosie looks
so regal sitting on the roof! Do you
think Arthur misses Lisa, that he's
not around as often? Awwww poor guy!
Maybe Arthur needs a little playtime
to get him out and about again!? :)

It sounds absolutely perfect. And you're up so early too! Enjoy the bugs and the lovely sunsets and sunrises...

We still get the national flights, but without the international flights (apart from New Zealand and the Pacific Islands), it's lovely and quiet in the skies.

I hope you're feeling better. I think cats are wonderful company when one's in bed feeling poorly. They just curl up beside you and sleep.

That is at least one good thing to come out of the volcano.. lol I love all the collage pictures.. I bet Arthur is off getting lots of attention.. Mum also has a bad cough and cold.. HUgs GJ xx

Bonjour dear Gattina,Hello sweet friends!
What a problem "6 million people are blocked in airports ", thanks God mommy, dad and sis just arrived from Brazil before this "mess"!
Oh Rosie, you are sooo cute enjoying the perfect garden in your place,and you are such a brave catgirl,did you see any little mouse around there?
Also lovely shot of Pookie and Kim!
And about Arthur, I'm also curious where could he be during the day?
I would like to thank you for so nice comment, your clues help me and my mommy. Now I've started to climb my new tree, mainly because mommy changed the place and I also find some delicious treats up there ( great hint!). She put my tree near the door, I think I liked it as well! :)
Happy Tuesday dear friends!
purrs and love
Luna

Muning is like Arthur, he spends more time outside and sometimes doesn't go home and when he comes home...he looks very tired and dirty. Old kitties...I wonder if he forgot his way home!

Arthur you look very handsome, are you waiting for some lovely kitty to pass by?

Although the ash cloud doesn't sound like fun, all the kitties look like they are relaxed and having fun.

It's been plane free here in the UK too ~ so peaceful!

Aren't you worried about Arthur, not knowing where he is? Rosie looks so sweet in the small picture in the grass!

I hope you are feeling better, soon. Our Winston is like Arthur, out and about more than at home lol. Sometimes when we are out walking the block or driving out of the subdivision we will spot him in a neighbors yard. One neighbor reports that Winston sleeps in an old chair in their garage lol! At least he does know where home is. Great pics as always. :)

I'm glad the ash isn't causing you a lot of problem, but am sorry to hear you have a cold. Cats are always able to make themselves happy no matter what the circumstances, as long as they get fed! Arthur seems to be a very social cat :-) One way to get to know your neighbors.

You know I have a Christmas ornament made from the volcanic ash is Washington State a few years back.

Glad to see you are all enjoying the blue plane free skies! Happy Tuesday!

It looks like all of you are enjoying the outside. Arthur you have the perfect spot to sit and observe everything.
Rosie you look gorgeous against the red on mom's bed.

Have a wonderful day

Looks like Rosie and others are enjoying the outside in spite of the ash - I guess the plane-free skies can be nice for a bit.

Sounds like everyone loves and is charmed by Arthur if he's getting treats and places to sleep around. :) Sorry to hear about your cold and hope you're better soon. Lucky Rosie, Kim & Pookie, enjoying the fesh air without planes going overhead. I wonder if the ash will start falling down into the atmosphere on everyone or if it will just blow away?

Rosie, you look great on the roof getting your Vitamin D. Did you call for Arthur? Maybe if Mom clicked a clicker and gave him a treat he would come running.
Mandu

WE hope you are enjoying the plane free skies - we hope you get them a little bit longer - it has to be so nice and peaceful! The kitties sure seem to be enjoying it!!

Gattina,you have a cold?
Hope you'll get better soon.
We Purrrs so hard for you.
Rosie looks really adorable in greens and of course in your bed,too!!
Pookie and Kim are gorgeous kitties!
Arthur really is free in mind kind of kitty. We love that!!

This is great news that every cat had the opportunity to go outside and enjoy blue sky with no airplanes.
Rosie, you are really up high! You look super great and powerful up there, which is great because you are the youngest!

Arthur, what are you doing in the basement? Are there mice down there??

Sounds heavenly! How nice that all your kitties are enjoying the beautiful blue skies and outdoors. I LOVE today's collage pictures of Rosie. :)

Our Cats are still inside, but Stompa is missing.
He wanted to go outside.