The good news this week is that Rosie is completely healed and back to her old self, with gathering her mousies around the food bowls and playing with Arthur. 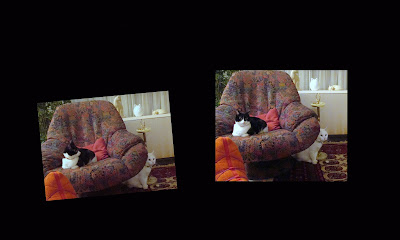 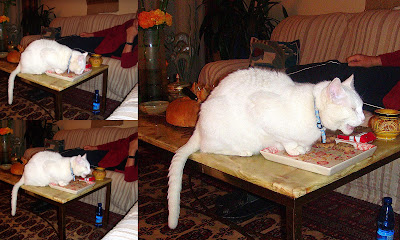 Arthur who always surprises us discovered chocolate cookies which were laying on a plate on the table ! He started to eat the crumps and we were so surprised that we didn't move and let him eat. Mr. G. broke another cookie for him and he ate it too ! Crazy cat !


Kim at the cat groomer

But the hit of this week was Kim ! As you may know Kim is a very shy cat who only likes cats and just supports humans. She would never sit on a lap and she doesn't like to be petted. She also is mostly outside and only comes in for food.

With her long hairs she gets a lot of knots and this hurts probably. But it is impossible to brush her ! She runs away even when you hold the brush behind your back she feels that you have something with her in your mind. So 3 times per year we have to catch her and I go with her to a pet groomer. Just see how she behaves there ! and I had told the girl the very first time, that Kim is wild and would scratch and get histerical ! As you can see there is another way to get out the knots of a long haired cat than shaving the poor thing completely.

Hey Rosie, good to hear that u are fine!

Thank goodness Rosie is better. It's awful when you don't know what's wrong with a pet and they can't tell you. Anyway, fingers crossed that it doesn't happen again.

I get the feeling that Kim is actually enjoying being groomed. She sounds like Mitzi, who doesn't like being picked up or cuddled either. But she will come up and let her head and ears be scritched...she loves that.

Funny cat. Bella, of course, is completely the opposite. Although she suffers being picked up, it's not for long. But she will sit in my lap and sleep all day if I let her.

Kim you must feel so much better after your grooming session and you look good too.

Rosie, you look good too.

It is so good to hear that Rosie is doing so well. I guess the mystery will stay a mystery.
Arthur is a cutie, eating a cookie. I used to have a cat that liked canned fruit cocktail.

Isn't it funny how well Kim behaved at the groomers.I bet she felt better to get those knots out.

Wow, she behaves very good at the cat groomer. I think Luna would kill the cathairdresser. The shorhaired cats like it to be brushed but not for a long time.Luna hate it...
Hehehe, why should cats not like to eat cookies? Our former cat Dixie loved Potatochips very much.
We are glad Rosie is completly recovered.
*Happy Tuesday*

We are VERY happy to know sweet little Rosie is well again! And Kim is such a good girl at the groomers ~ we are very impressed.

I'm so happy to hear that Rosie is doing so well....
The video is so cute!!

Wow, I can't believe she just sat there and let the groomer work!!

I'm glad Rosie is back to normal.

Kim is amazing at the groomer's! Luna would throw a hissy fit for sure. Kim really looks amazing.

We are so glad Rosie is better! And Arthur is a silly cookie.

Kim looks great! I am sure she feels better, now she just needs a little sweater.

stay warm and cozy all of you.
Spring is coming. I just know it

Yea Rosie! Good for you Arthur, and Kim!! Well, WE are impressed:)

Hi Rosie! ((kitty hugs))
We had a Persian cat that was impossible to groom and we had
him shaved because of the knots,
he felt so much better after.
He was a sweet cat other than
the bad grooming episodes which
happened when he got older.

It was wonderful to watch the groomer. Kim seemed to really enjoy this! Of course she would allow the groomer to make her beautiful! What girl doesn't enjoy the beauty parlor! It's no fun to have Mum or Dad do the work! She wants her personal beautician!

Wow, Kim's being such a good girl here! She really is beautiful, gorgeous colors. Her fur is so much like Amber's in length and type--not color though. And it's sooo good to hear how well Rosie's doing!

Glad to hear Rosie is feeling better.
Poor Kim. That is a lot of fur on the ground afterwards.

Kim is totally gorgeous and what patience she had with the groomer....we know that neither of us would ever have been that good!!!!!

I dearly wish we could do that with Mouse! I took her to a very nice pet groomer the first time she had a problem and Mouse immediately bit her. Mouse isn't patient with anyone...unfortunately. Kim is a good kitty and must know how much better she feels when the knots are gone. Mouse is much nicer once she is shaved and cooler for the summer.

That is impressive that Kim was so patient with the groomer - I am sure she feel so much better now.

And cookies - of course cats like them - the love sweets (well, ok, mine do at least, so I assume they all do!)

And we are so happy to hear that Rosie is doing so good! That is just wonderful news!!

Think it is best for Arthur's health that he should be not be spoilt by eating too many cookies with chocolate.

Chocolate contains the compound theobromine which is a diuretic as well as a cardiac stimulant. This can cause the pet's heart rate to increase or it may cause the heart to beat irregularly, both of which can be dangerous to the animal.

Rosie looks 100% again. I'm so glad!
Poor little Kim though. Gosh I woudln't like that hair cut either but she must feel so much better with all those nasty tangles gone.

Watch Arthur with the chocolate; it's poisonous to cats. Mind you, Scoop used to sneak chocolate milk if I took my eye off my glass and it never seemed to do him any harm!

We is very glad that Rosie is all bettah.
Kim gets to be a short hair kitteh for awhile. I'm sure she feels good.
Thanks fur stopping by my site!

so glad Rosie is all better!
LOL! Arthur! Sometimes it's just astounding what cats will like to eat. We had a cat once who liked a variety of people food including popcorn. Oliver likes crackers.
Thank goodness Kim behaves at the groomer's!