KIM AT THE HAIRDRESSER

Kim my long haired cat was again full of knots. We always try to brush her but she runs away and it is very difficult. Twice I had her shaved at the vet, but on a long run that wasn't a solution. And then suddenly I discovered a "Beauty Shop" for dogs AND cats just by driving to the station. I made an appointment. 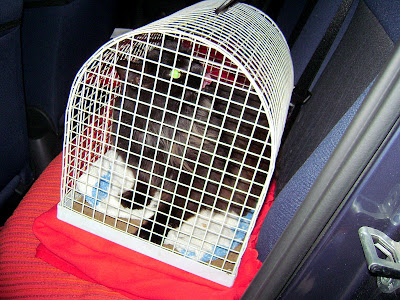 To get Kim in the cage was an adventure. It took us half an hour to get her in and we were both red faced and breathless. I thought with terror what would happen in the Beauty shop !

When I arrived I told the lady that Kim is very shy and she would probably be very aggressive, that she should pay attention, wear gloves and attach her. Nothing of that happened ! The girl took her out and put her on the table and started to brush her and take the knots out even at her belly ! 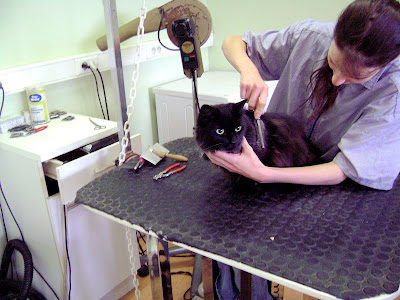 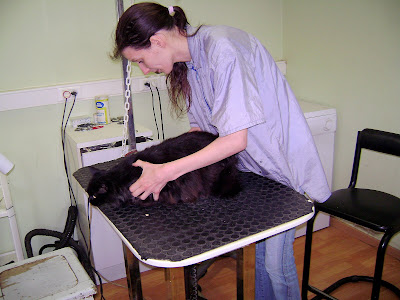 and Kim this beast didn't do one meauw she just sat there and enjoyed the procedure ! She purred and kneaded with her paws I just had never seen her like that ! The girl told me that she had never had such a friendly and kind cat ! I was stunned ! Miracles happen apparently !

Look at her how she enjoys it ! She made us think of a lady enjoying the hairdresser !

and this was taken out !

That's cats for you! Kim did this just to make you look all-how :-) But she does look very pretty after her day at the salon.

Wow, she certainly enjoyed that all right...lucky cat. I wonder how Mitzi would go. Fortunately she's a short haired cat so I won't ever have to try and find out.

That is so cute! It looks like Kim had a wonderful time there - I love her tail flicking contentedly in the video. :)

Well....I really have to say,
maybe kids are always bad to mommy.
Good to other people, hahahaha~~~~
At least Kim has a very good salon time!

That is absolutely hysterical. Cats, they will make a fool out of every time! Mine are a horror getting in the pet taxis and going to the vet but once in the office they are good as gold.

I like the idea of the beauty salon for kitties too. I have only seen dog stations here. I would love to have someone bath Calista and Baby for me.

Wow... what a pampered cat. Luckily mine are all short haired except one rascal, Jeremy :P Life over here has been rather stressful with the two twins growing up too fast. It's their birthday today too :P

Kim gave you the surprise to be the nicest cat it can be!!!I was laughing reading your post! She makes me think to some humans, old persons who finally have a reaction we didn't expect in some situations!

LOL! Cats are so funny!
Kim looks very beautiful after her day at the salon and you know I think animals know people really well and that girl must be a real animal lover for kim to sense her peacefulness and behave so calmly like that.
I also think cats are psycic so maybe Kim knew she would look so pretty and feel good when she was done at the salon so that is why she didn't fight it.

Glad to see that Kim enjoyed her trip to the salon.

It certainly sounds like Kim enjoyed her trip to the hairdresser. I'm sure she feels a lot better now with all the knots out.

Wow--a miracle for sure! Great photos and video!

Dennis is very timid with the Vet, with any stranger ...
it looks like Kim had dread locks!

Dennis loves it when his mom brushes and washes his coat (with just water on a fluffy cloth, but still, it's very nice to be fussed over.

lol!! What a great story. Of course Kim would act all sweet after you warned the lady about "the beast within."

It must have felt so GOOOOD! She definitely looks happy.

I think you could make another cat out of just the fur that came off of her!!!

Kim is such nice and lovely ladycat that she, like most lovely ladies, enjoys going to the spa. i love that video! you're cute Kim!

Maybe she has a special aura which attracts cats to get calm. I have the same feeling with our vet here. He can do anything with Chica and she never complains :-)

I have tagged you with a Meme, maybe you'd like too play. ;-)

Wowie just like the spa!!
I think Kim looks happy even!
purrr

Hello , my mom leaves a prize for Gatina on my blog!

My Tas is just like Kim, he doesn't much like combing, especially his belly. The amount of knots I have to take out all the time is astounding. He's clear of knots at the moment, but I had to clip very short his hind back, looks quite silly.