CATS ON TUESDAY - LISA THE TERROR

Lisa is a terrible cat ! She terrorizes us, her humans ! She has found out that when she makes her plaintive noises she had done when she suffered from anxity, either one of us would run to see what happens and then pet and feed her.

Now Lisa feels so good that she loves to wake us up during the nights. Last night I woke up because she meowed so strangely, it sounded so sad that I jumped out of my bed, to see what happened to the poor girl. The poor girl was very satisfied of the result, followed me purring in the kitchen and ate a bowl full of food. I returned to my bed and tried to fall asleep again. But Lisa didn't want me to sleep, when she had finished eating she sat in the middle of my room and started again. First soft and plaintive, then angry and then furiously louder and louder ! It sounded like a mixture between meauwing and croaking like a frog, a very special noise indeed. I didn't move. I heard her scratching at the closet, then at the door and as I still didn't move, I heard her pee !

I said : "Lisa stop it !"then louder LISA !!! and as this didn't help I throw a book in her direction. Lisa didn't bother, she just continued. I switched on the light, Lisa stopped and looked at me happily. If she could smile I am sure she would have smiled from one ear to the other. I switched on the light and looked at the damages. I was considering a murder ! But then suddenly as if she had read my thoughts she stopped and disappeared. I cleaned up, and now fully awoken returned to my bed. Next day, Lisa slept the whole day peacefully while I was swearing silently, each time I saw her laying in her basket !

This night I woke up all by myself to go to my litterbox. Lisa didn't show up. Strange. I looked in the whole house because I wanted to avoid that she would wake me up later when I was asleep again. She slept peacefully on the sofa. I said : "Lisa come on and eat !" She looked at me as if I was just escaped of a mad house and didn't move. Ah ! I thought, not with me !! and I pushed her from the sofa. Slowly she followed me in the kitchen, I fed her and returned to my bed. I had taken my revenge ! I woke HER up ! But at 5 am she was there again. I think I will always be the looser ! 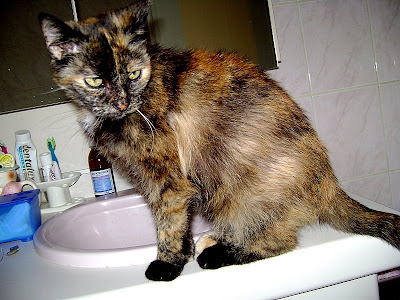 The fur a little thin, but still in good shape, she 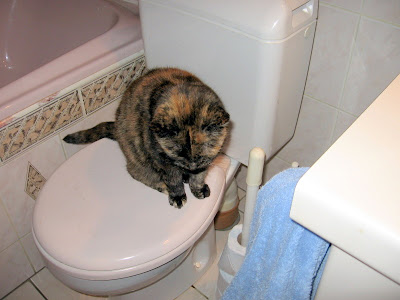 assists me in the bathroom 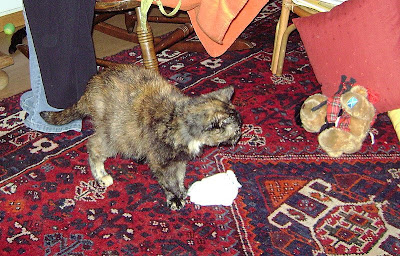 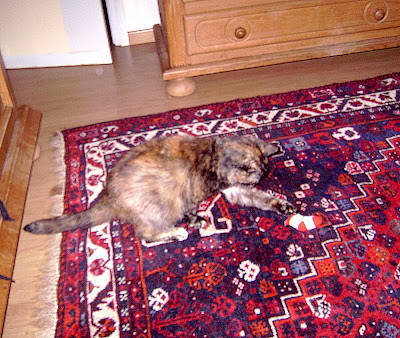 She started playing a few weeks ago, exactly as if she was a kitten ! 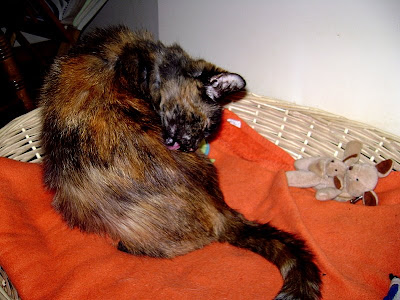 and while I have dark rings under my eyes, Miss Lisa enjoyes a nice morning grooming ! 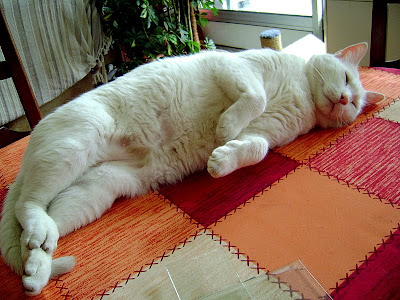 Arthur apparently had put earplugs in his ears !

Aaahhh poor Gattina & Lisa, I don't
have any answers for you, wish I could help. I've never really had
this type of problem with any cat.
I took my Spooky to see the Vet
today, he had a weird cough almost like something is stuck, but it
doesn't happen on cue. Vet says
to use hairball med and pepcid for
his tummy. I hope it helps.......
I hope you get some sleep dear!

I am starting to have problems with potty training, too! Oh, Arthur is so adorable!

Oah Poor Gattina....
I hope you have a little more sleep time, it must be really really tired~~ But I feel Lisa is back to baby period, wanna you pay good attention on her~~~

I'm posting on a Monday afternoon as you suggested so I can be more on European time. :-) Yeh, I'm third in line!

Your cat story of Lisa is so funny--especially the part where you get your revenge and wake her up!

On another note, I wonder if she's trying to tell you something???

Scoop used to waken me in the middle of the night because he was a night person. But Lisa sounds as if she's depressed again (that peeing is very worrying). She's looking better but is her mental health improving too? With the playing like a kitten I'd say yes, but that night howling..... Is she maybe jealous of Rosie?

What a turn of events for Lisa. And she peed! You threw the book at her, I'd have done the same thing.

Gretchen just stares me down until I figure out what she's thinking then she gives me a meow of approval.

Oh dear. I am so sorry that Lisa is being such a trial!

If you shut her out of your bedroom at night, I suppose she would just scratch at the door? Could you give her her own nighttime room, like a bathroom or guest room?

At least Arthur is taking it all in stride.

Oh poor Gattina !!! That is too bad. I know that Luna does that alo, but i don´t deed her at night. They always have a lot of dryfood in their bowl over night.
Now Luna decided to be outside at night, she stand under the bedroom window and meows very loud. I think she is boring and would like to be employed.
Ja, Gattina, da möchte man manchmal die Katze an die Wand klatschen, oder! Leider sind Katzen ja nunmal teilnachtaktiv....

Waking you up at night is not very nice of Lisa. Especially if she JUST wants to wake you up and there is no other reason. Good job with the revenge, Gattina! I would have probably done the same :-) (although ours never wake us up.)

But Chica also got very affectionate and needs lots of attention now. Usually just looking angry into her direction is helping then.

I wish the vet could figure out what is bothering the poor kitty. Arbitrary peeing like that could be a new urinary tract infection. I'm glad she is happy and content (at least when she is not happy and is plaintive). This is a complicated problem!

Good job, Lisa, keeping your humans on their toes! You deserve the best treatment possible at your age! Peeing outside the litterbox isn't a good idea though - humans generally don't like it!

Lisa is a clever girl! Getting fed whenever you wish! We will make a note of that one!

Gosh.. Lisa is at it again? Poor Gattina... you should have more naps in the evening since you would be wide awake in the morning now :P

I'm just exhausted from all the hustle and bustle these few days. I will be back to comment more if I still have the energy left.

I hope to catch up with you all later.

Bless your heart. Before I was married Calista used to wake me sometimes playing under the bed and batting things and I would get so mad at her for waking me and I had to go to work. I understand the frustration, and the peeing would make me so mad. You handle yourself well. I guess animals learn quickly how to get what they want. Lisa looks very good for her age. Have you considered making her a bed in like the garage or something so she is safe but can't roam and wake you?

Sorry about the wrong link Gattina - an accident! I fixed it so perhaps you could delete the old one for me please? (Number 7)

Glad to see that Lisa is happy and playful, even a bit mischievous - but big changes in behavior could be something more concerning. I hope things are OK with her, and that you get some sleep soon.

I wonder if Socks would do similar things to Lisa if I left her out of the office at night. But then, Socks is still quite young, and has been trained since a kitten to be here, where she has her own food, water, and litter box at night. (If I let her out into the rest of the house, she focuses on crawling under the covers and biting my legs and feet!)

I haven't followed Lisa's tale -- wish I could come back to Cats on Tuesday but things are even crazier now for me than before -- so I am learning from what you have said and the comments. As always, I love the way you tell your story. I do hope you get better sleep, though! :-)

Hi Gattina, How are you?
Just swing in from EastCostLife to say hello. I like your cat, especially the white one, Arthur, so cute.

what Lisa did, reminds me of some my cats, on certain occassions, they do love to bother us at the time when we really need some good rest, but i think this is part of loving experience...

for me personally, is like purifying my heart, letting out all ego to become selffishless, and thus, as a training for me to become more sincere & compassionate; because sometimes our cats may want to tell us something, but they have their own unique ways to do it, which in our terms sometimes could be so annoying;)

ohh, btw, i love seeing Arthur in that deep & contented sleep...hmmm, as if he want to make fun of you for not having a good sleep:(

Oh Lisa, what a venerable and spunky girl you are! I hope I am just like you when I am seventeen years old. I love the idea of keeping Mom on her toes! *smile* And you look beautiful!

Purrs and snuggles from Marilyn.

Lisa, the Terror,
well,
the reason I could not post a COT last Tuesday:
Felicia and Rosa in terrible Fights.
They are now friends again - I hope.

I wait till my cats are napping and I go wake them up. Sassy gets my personal special attention because she sits outside my window at sunup and meauws till I get up and head for the kitchen. Every chance I get during the day I wake her up and tell her its because she wakes me up during the night. Knowing cats like I do - she's probably sitting under my window every morning saying I'm doing this because you wake me up every day when I'm napping!!!