A VISIT FOR THE CATS

Rosie now is not afraid anymore of the tunnel, she plays and hides in there much to Arthur's annoyance who has some difficulties to get in there, he thinks he has some weight problems lately. But he tries and follows her inside. Then you hear a big rustling and think the tube would explode in a minute. 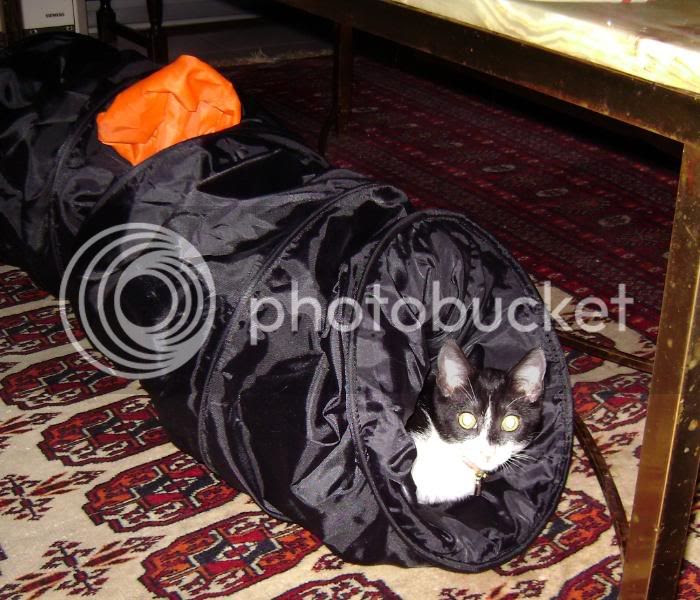 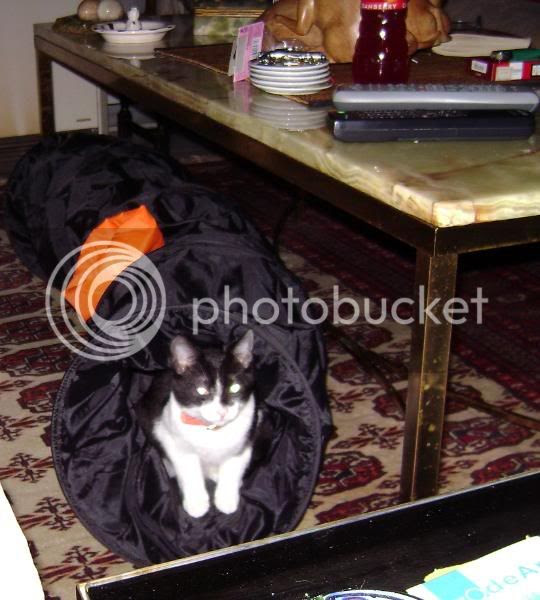 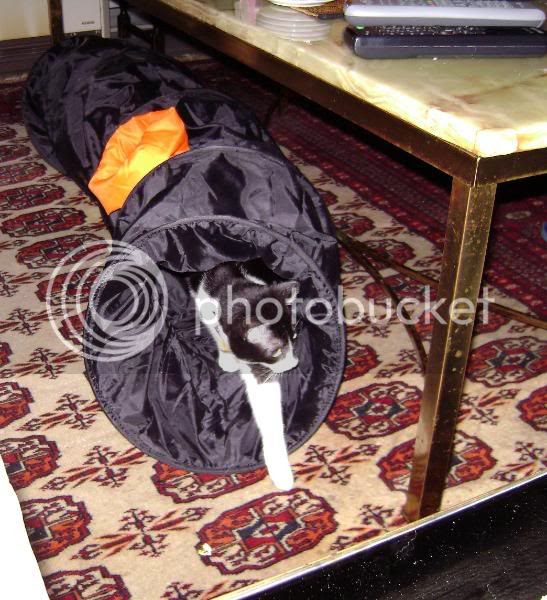 and here she comes out, Arthur had disappeared while I was looking for my camera !

This week end our son came over for a visit. And of course he was quite surprised how big Rosie had become since he saw her last time. To play with the feather stick made them both happy, although it had lost a lot of feathers meanwhile. 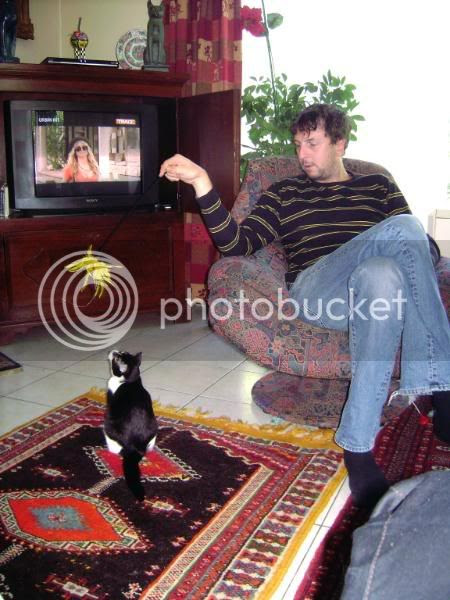 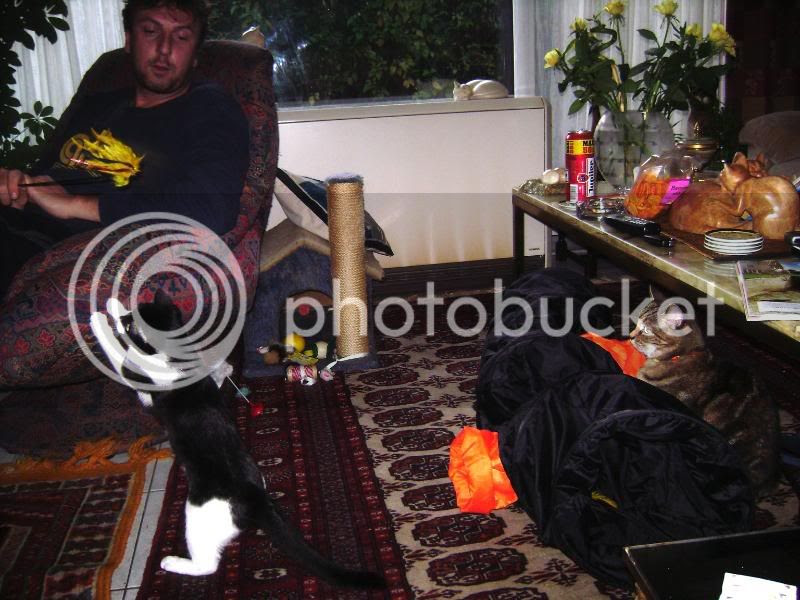 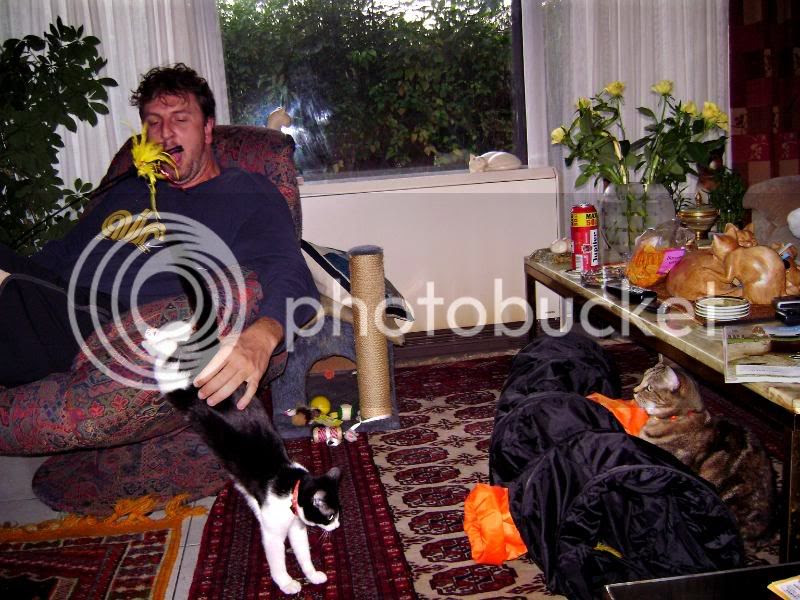 On these pictures you can see how lazy people are to move while the poor cat jumps around and does her best ! 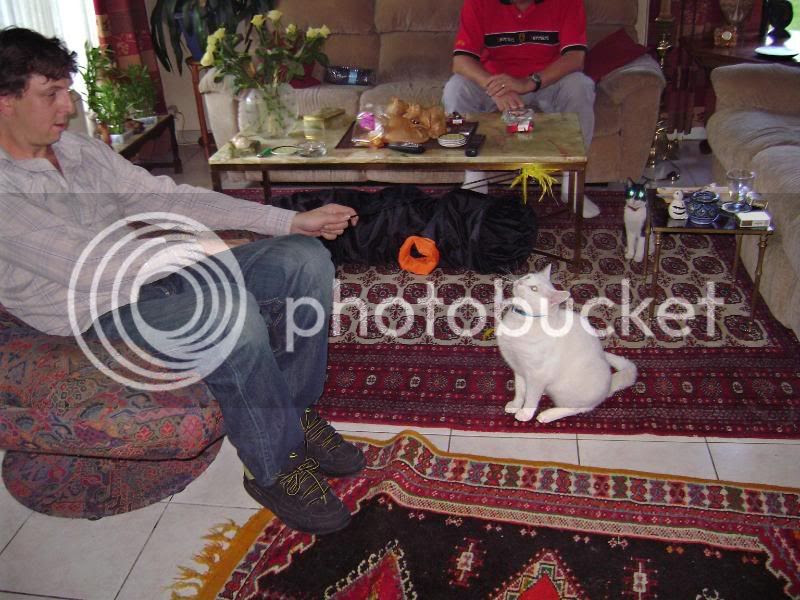 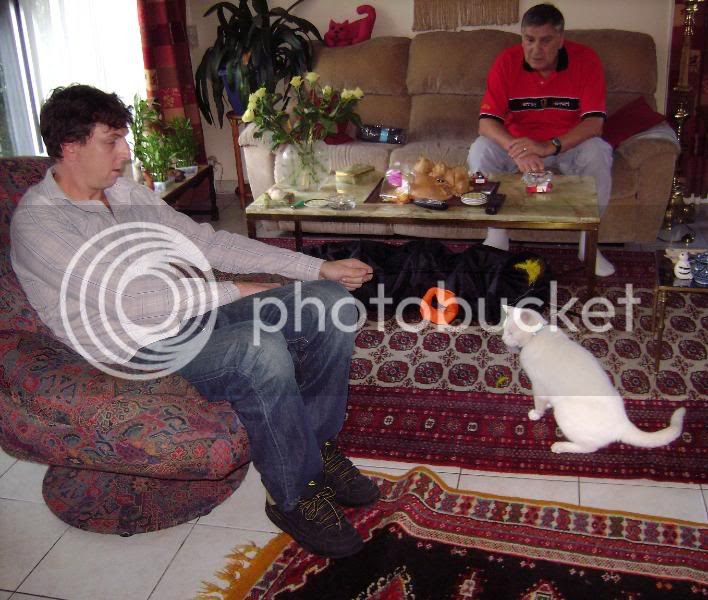 He jumped too in the air and felt down like a rock on the floor. But he loved it ! 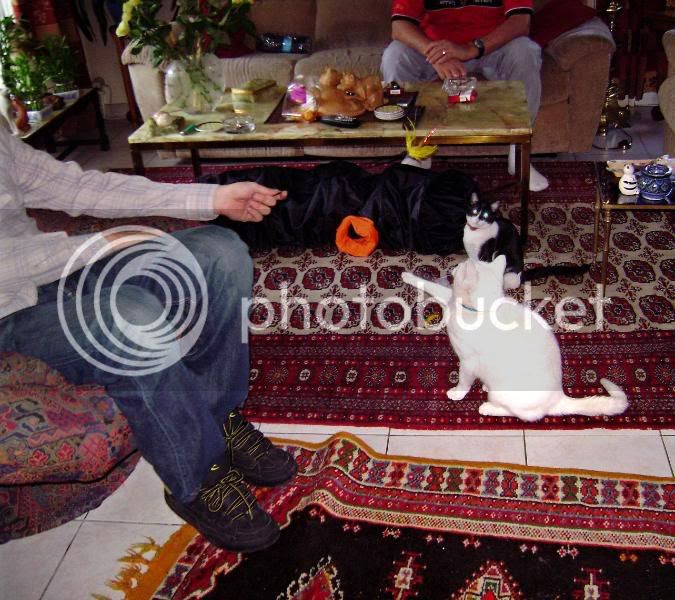 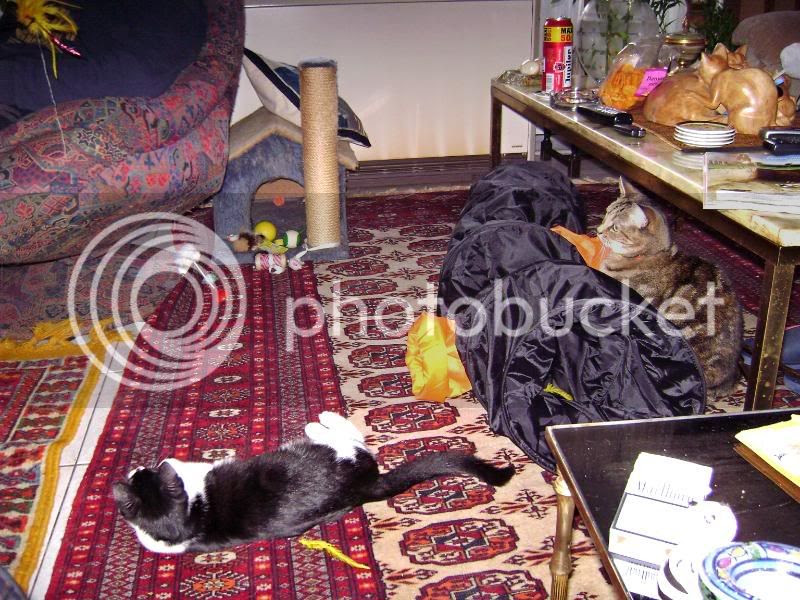 Pookie also came, but didn't play. I think she was upset with her former servant because he had told her she is too fat. He had also dared to cuddle her without her agreement and forced her to sit on his knees. Pookie was very angry had hissed, even scratched and then had disappeared very offended. The former servant was very disappointed that his cat didn't great him with open paws.

I see you are making great use of the video on your camera! Isn't it fun? I want that tunnel: the black with orange is great color for this time of year (do you do Halloween in Europe?). I never saw Rosie's sides as clearly: she has a lot of white, so much so that I think she may be white with black (huge amounts of black). I wonder what the cat association people consider it. It's fascinating colors.

Wow, Rosie is really getting bigger now! Such a change since she first came to live with you. :) And she loves her feather toy, so cute!

Arthur and Rosie and Pookie are all adorable~!!!

Oah, I really love the video, I see many times, even Rosie is growing, but her cute feet jumping around makes me smile all the way. She is such a cutey~!!!! I want to hug her so so much~!!!!

I like your family staying all together (both human family and cat family) and play together. Even Pookie is not playing, But I am sure she is having fun watching~!!! That is very very warm and sweet~!!!!

I enjoyed your funny narrations and photographs. Being on dial-up, the pictures loaded a bit slowly for me and I didn't see the video, but that's okay. I am not doing Cats on Tuesday this week because of several reasons having to do with my health, and also something isn't quite right with Socks. Hopefully, it's just a temporary difficulty with each of us. Have a great time with COT!

My Son was home this past weekend and our kitty Zander who used to sleep on his bed before he went away to school,
gave him the cold shoulder this weekend.
I am thinking my Alex kitty may need to go on a diet because he seems to be very big.
But how do I monitor his food intake with the other cats around and plus he likes to go outside and play and snooze in the yard and I know our elderly neighbor who Alex sits with in the mornings is giving him treats too.

Rosie, you look very cute playing in your tunnel and with the wand toy. I have a similar tunnel, and I love playing in it. :)

Rosie and Arthur look very happy to play. The tunnel looks kind of scary. Gretchen probably wouldn't like such a thing like that. She's kind of skiddish of anything large anymore. She's been that way since the roofers were here this summer. I'm surprised at her behavior, her nevousness lasting so long.

Love the video of Rosie and your Son! that is too cute!

Cats tend to be very particular with their people. You go away and they are offended.

Perhaps that is why Pookie & Lisa acted that way. It has been too long since he provided services! LOL

Arthur gets a boost of kitten from Rosie, I think. She eggs him on and he loves it. It's probably healthy for him, too.

I guess a tunnel would be a success over here too, but you never know... Great pics! I always like to lie on the ground too when I'm playing with the cats. :-)

I'm showing pics of the cats in their favourite napping spot!

That little Rosie just cracks me up. I am beginning to get very attached to her. She has so much personality in her expressions. That first picture is just delightful with that little head out of that tunnel. And good for Arthur not letting her show him up...he can still be youthful too! It looks like a good time was had.

Rosie and Arther are very cute in those photos, playing with humans, and the tunnel.

Rosie and Arther are very cute in those photos, playing with humans, and the tunnel.

Crazy love slaves we are to our cat babies! Cool toys--love the tunnel!

wow, look how big rosie has gotten! she is just a darling. she and arthur love that feather toy! fun fun.

poor pookie, don't let anyone tell you you're to big. just tell them you have more to love!

hi lisa! hi kim! it sounds like your visitor didn't interest you much. maybe give him extra love next time.

Sorry the former servant didn't get a warm welcome from all of the kitties. Rosie certainly seems to have enjoyed his visit however!

That tunnel sure looks like fun. I have never tried one of those with my cats. I am sure they would enjoy it though!

Sorry I am so late with my COT post this week, but I have been having technical difficulties with the computer. Happy Tuesday!

That tunnel is so cool! I think our cats would enjoy it and it has just the right colors for Halloween. Also enjoyed the little clip of your son playing with Rosie, my, she can really jump! :)

Rosie is a delight! She gets Arthur going and that is good!

I´m late ...like every Tuesday too as Luna Germany my sister name jaja
Very cute pics ,but din´t like so much the tunnel.
Very cute her son Gattino.

Rosie in the tunnel - she is adorable. And, as your son said: How big she is now. Think about it, when born they are less than a finger and totally blind - then they became predators. Amazing.

Great and funny reportage and photos.

Have a great week. I'll come stronger back beginning of next week. Still lot's of do here in the Winterhome and to close down the Summerhouse for the season - in the weekend to come

Goodness, Rosie sure has grown. What wonderful photos.
Sorry I haven't been around for awhile .. hoopefully I can become a regular visitor again now.
Hope you are well.
Take care, Meow