The heat wave continues and I moved my "office" on the terrace. Arthur's tent serves me as sun screen.

And while I am "working" I observe my little cats. 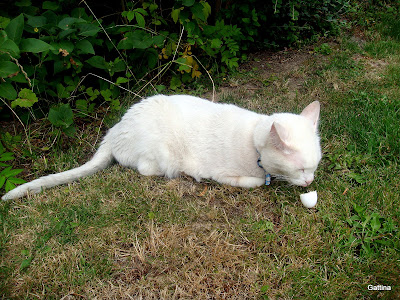 Arthur had found half of a bird egg and sniffed it very thoroughly but it wasn't interesting enough and he left it with his usual generosity to Rosie. 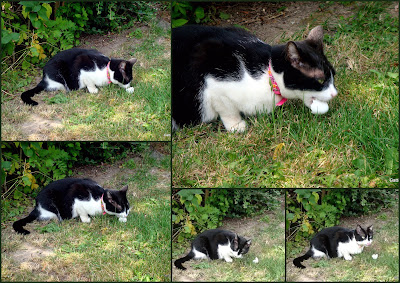 Rosie sniffed too, and even tried to eat it, but apparently it didn't taste good enough so she left it too and turned to other activities such as 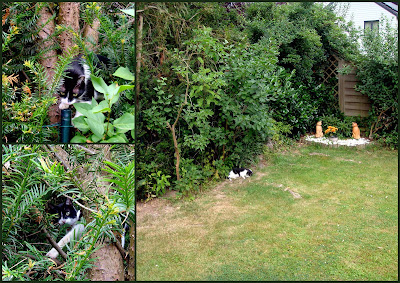 laying lazily in the heat, just besides our pet cimetary or she climbs in the trees and watches the world from there. 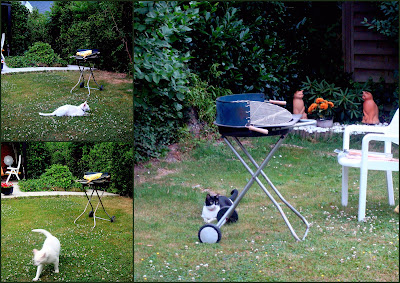 One evening we made a barbecue and of course Rosie and Arthur came and waited for some meat but as it took so long Arthur gave up and went away. Pookie and Kim didn't show up. 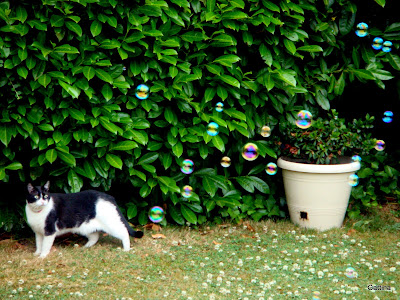 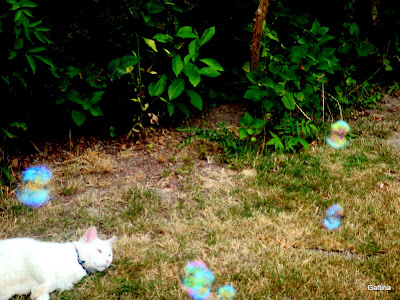 Mr. G. tried to get the cats moving and wanted to amuse them with soap bubbles, but they were not interested at all as you can see, so he amused himself. 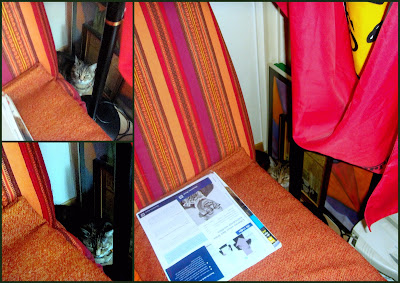 He also prefers to stay inside and "work" at his computer in his office. One afternoon he heard terrible loud snores behind him. He looked at the sofa but there was nobody not even a ghost who snored. He got up and looked from where the snoring was coming and found Pookie squeezed in a little corner behind the sofa where apparently it was cool enough to sleep deeply and well. It's really amazing that such a little cat can snore like a man ! Sometimes I suspect Mr. G. and it was Pookie ! See ...

My cats snore too. And have woke me up from my sleep before with their snorings. LOL!

We love the pics of yoor cats enjoying the garden. And larfed at yoor inovative computer sun protector!

Bonjour chère Gattina!
You are soooo lovely in your blue dress and how smart this idea bout your office in your garden, it's perfect!
Your backyard is beautiful indeed!
So funny idea about soup bubbles, I like this idea, I think I would be very curious and try to catch one for me! :)
As I'm very interested about the bird egg.I wonder about the smell and so on, but I think it's not to eat as Rosie has discovered there.
So funny your words about Pookie, maybe it's about this hot weather and she sleeps deeply.I hope I do not do the same because mommy could be nervous as I sleep in her feet every night and all night long!I don't want to bother her! :))
Happy Tuesday dear friends!
*** Mommy asked if you bought that lovely blue dress in Morocco!
purrs
Luna :)

Hi Gattina, you looked so relax on your new office, thought it might give you and the kitties a little comfort staying outside plus the beautiful garden you have!

I love soap bubbles, I mean...myself AL and of course the kitties, it would be lovely to see all kitties catch and chase bubbles with us! MOL!

I love all your kids !
and I love Rosie with the soap bubles..her eyes look amazing : )

Too funny about the snoring!! Too bad Rosie and Arthur couldn't wait to eat. If it was a dog that egg shell would have been gone. Great pictures.
Have a good week.

Sound slik eyou all are having a fun summer. Stay cool!

Bubbles are always a delight.

So cute about the snoring. It looks like your cats have such a fun place outside to play or to hunt for interesting things.
Stay cool in your office on the terrace. It is going to be a hot day here today too.

Lucy also snores like a grown man sometimes and she loves bubbles.

Nice idea of having your office in your lovely garden and enjoy watching all the kitties.

This is a great cats on Tuesday post! We think that it sounds like fun to investigate the egg shell - but we probably wouldn't eat it either. And we hope things cool off there - we know it is so hot for a lot of kitties right now!

hahahaha funny. Princess used to snore in her older years. It was pretty cute and not too loud, but it is in a very quiet room.

It is hot here and we are SICK of it. We have air conditioning but you feel like a prisoner in your house. When you go out, it is so hot you feel sick. So... mom gets a lot of work done cleaning and such, gathering things to give to charity. This keeps her productive and I get to watch.
Rosie and Arthur have a great adventure every day in the green garden!

Enjoyed the pictures of your gang enjoying the garden. No one was interested in the soap bubbles? Isn't that just like a cat! Our dog loves them--chases them and eats them. The cats, though...same reaction as yours, lol.

So many fun things to find and wonderful places to explore--both outside AND inside!

Keep cool and have fun Rosie and Arthur and try not to snore too loud Pookie.

It may be too hot where you are, but I can't wait for summer to come. Although our winter hasn't been too cold this year (although cold enough for me), I'm a summer person.

As for your feline family...they have such a good life and are very lucky cats. Although I've never heard a cat snore as loud as you say Pookie does. I used to have a dog that snored louder than anyone I'd ever heard. He'd wake the dead with his snoring!

Glad to see you're all enjoying the nice weather. 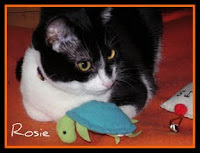