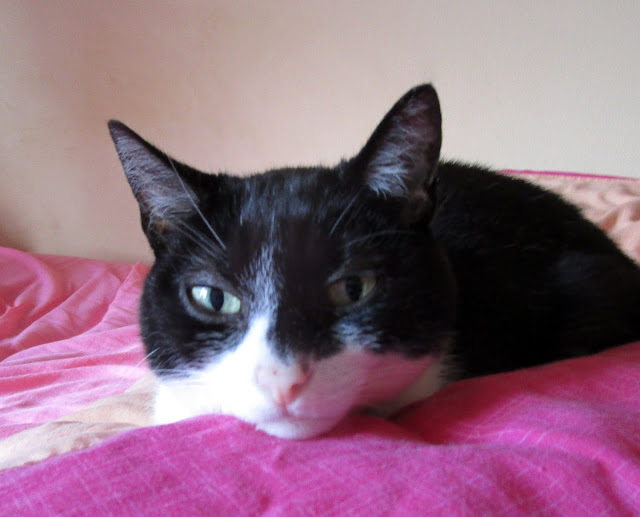 I just woke up to do the selfie ! 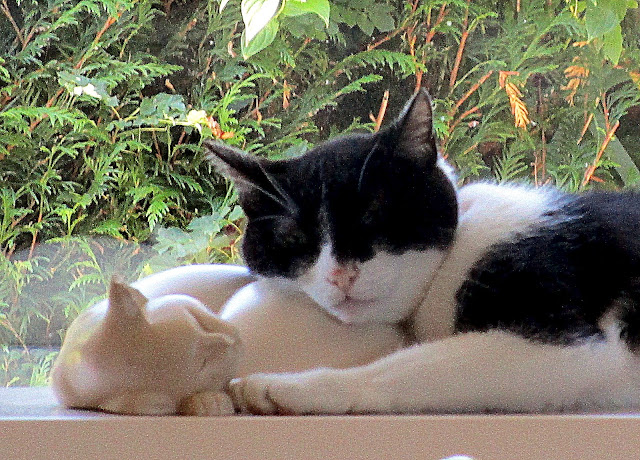 Now I am exhausted 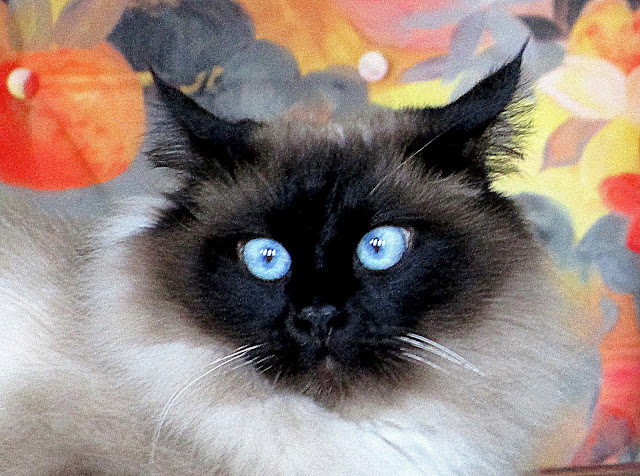 What is a selfie ?? That's my first one 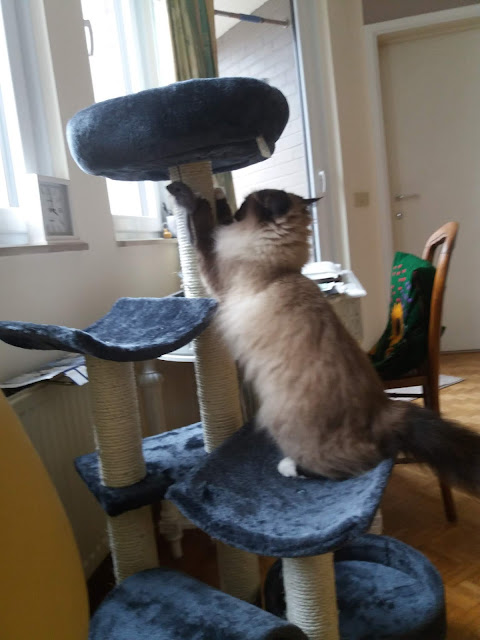 I am Isis and proud to have done a selfie ! 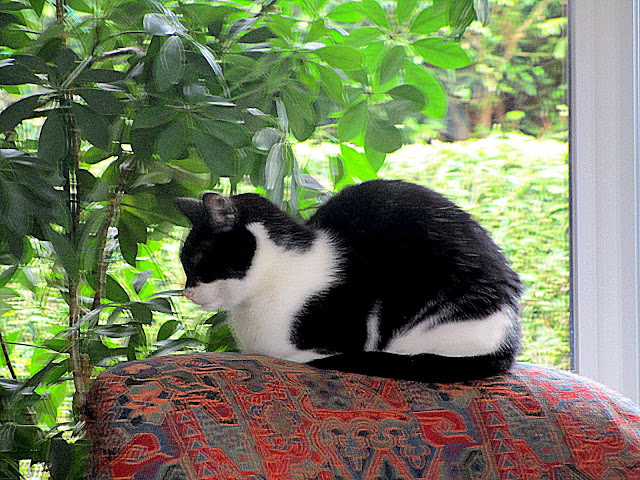 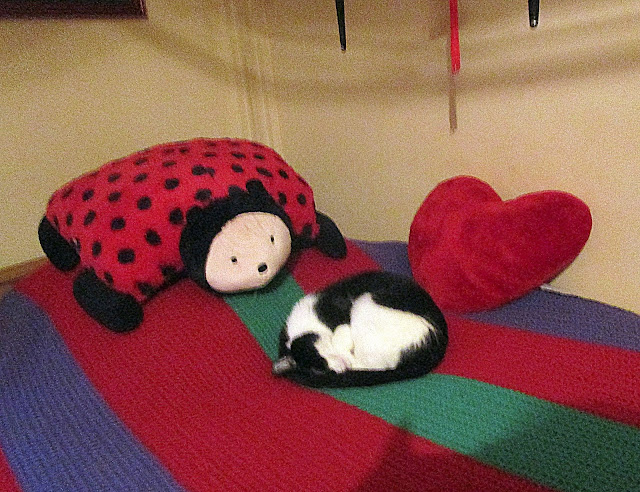 Rosie must have a sleeping virus, not the one which spread over the whole world, that's only for humans.

She sleeps most of the time and often on places where Arthur used to sleep.

It's too early to say if she misses him, but I think so, she looks a little lost and is more often with me then before.

Below is Isis, she belongs to my friend Nicole who adopted her from an animal shelter where her daughter works. 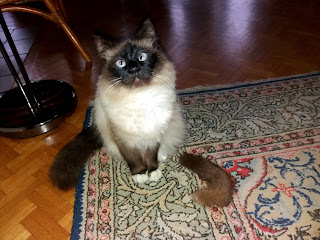 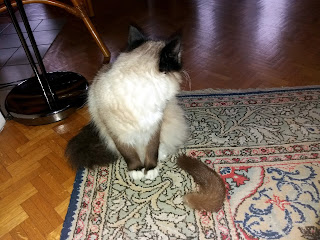 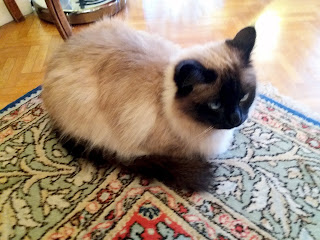 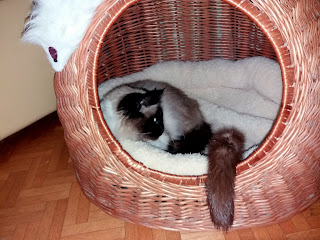 Isis is four years  old and a Birmanese cat, a little girl who should produce a lot of kittens. Fortunately Mr. Birmanese didn't like her or the other way around, it didn't work. On top the poor thing was terrorized by two little kids who loved her too much. Finally the owner had enough and brought her to the shelter.

She  was skinny and rather shy. Nicole was informed by her daughter that there was the ideal cat for her who was used to stay in an apartment and never go out. Nicole saw her and brought her home.

Ever since Isis became a beauty with her cross eyed blue eyes, her fur is shiny and she became more round. She also turned out not to be shy at all and is very social. When we are at Nicole's she is always with us and we can pet her she is not shy at all anymore. She is an only "child" now and of course spoilt ! She was lucky to find such a good home, in fact both are very happy to have found each other ! 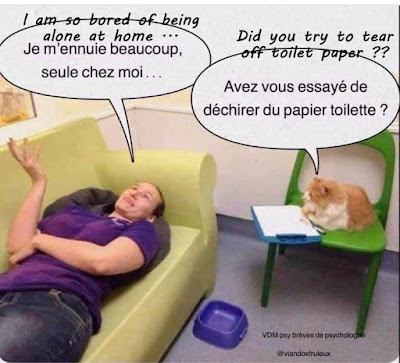 Isis is beautiful. Poor Rosie, she must miss Arthur.

Hope to see more of you Isis on the Selfie Posts. You are a beautiful cat and Rosie needs a friend to share selfies with now Arthur has gone and is so sadly missed.

Yep, Rosie misses Arthur. Isis sure is a pretty thing and she sure hit the forever home jackpot!

Isis is in a much better home now, and I'm glad!

I am sure Rosie will get by, though I doubt things will ever be the same. Maybe there is room for another sweet prince, or princess, like Isis? Whatever happens though, Rosie and Isis have excellent and loving homes.
Stay safe and well.
Purrs
ERin
PS. Yes, taking selfies is so very wearisome! I have to sleep an extra few hours just to get over it ;)

We love sweet Rosie. We bet she misses Arthur.

Isis sure is pretty. We are so happy your friend rescued her.

Rosie is sure a pretty little napper, I think she misses Arthur too. Isis is a very beautiful kitty and so lucky to have found the purrfect home.

Rosie we hope you find time to do more selfies in the future.

Rosie must miss Arthur, and I know you will too.

I can't STAND people with stupid children that torment cats. There is a special place in hell for those.

Seems like Rosie is grieving in her own kitty ways.
Isis is so beautiful! Glad she now has an ideal forever home where she can flourish...and it seems she is!

Rosie, you are so beautiful. We know you miss Arthur and We grieve for you too.

Isis is a real beauty. How wonderful that she found such a great new fur-ever home.

I'm sure Rosie misses Arthur. So do I! Very nice selfies!

Mom suspects Rosie does miss Arthur. She can tell that Giulietta still misses Fiona. And she has had other kitties who have missed fursibs who have passed. Isis is absolutely gorgeous. It is wonderful that she found a great home. Thanks for sharing her with us and for always hopping. XOCK, angel Lily Olivia, Mauricio, Misty May, Giulietta, angel Fiona, Astrid, Lisbeth, Calista Jo, Cooper Murphy and Sawyer

Oh, Rosie, so sorry you miss Arthur, but your mom needs you now, so you can comfort each other and maybe share memories. Granny always does that and it works, maybe with you too💗Isis is very beautiful. glad she found such a wonderful furrever home😸Clean Pawkisses for a Happy Wednesday. Stay Safe, Healthy and Yourselfie🐾😽💞

Isis clearly knew she wasn't supposed to be in that other home. She now knows all is well with the world, and you're the right purrrson for her. Happy Forever Home, Isis!