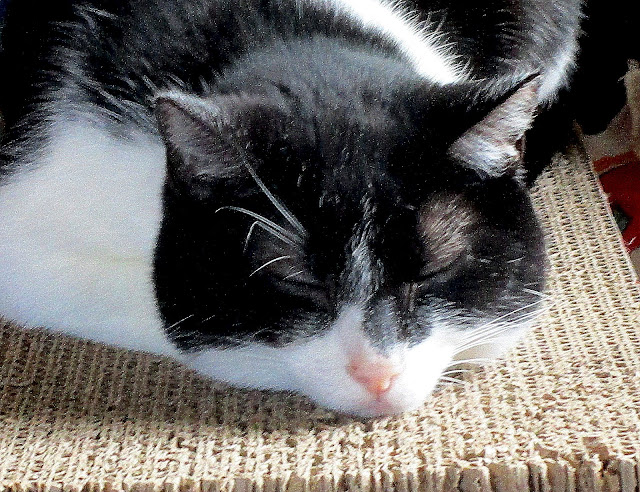 The best bed in the world ! 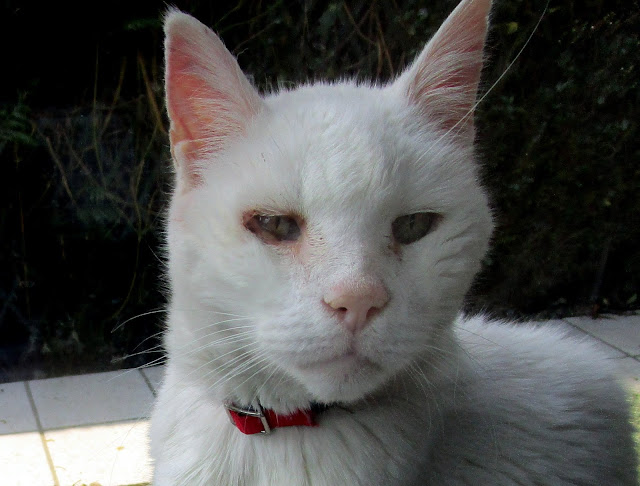 An outside Selfie ! Long time ago it didn't happen !

There is not much to report this week, as I, my cat's servant was "out of work" in form  a very strong flu. On top of that Mr. G. had dreamt that he was sitting in the wrong train and had jumped out. Arthur woke me up and instead of going into the kitchen to be fed, he showed me Mr. G who was laying on the floor surrounded by by a huge mess, the chairs had fallen, the bedside table and of course the bedlinen. I couldn't get him up, he was still confused and wanted his train ticket. I called the ambulance, and they brought him to hospital where he was diagnosed with a broken hip. 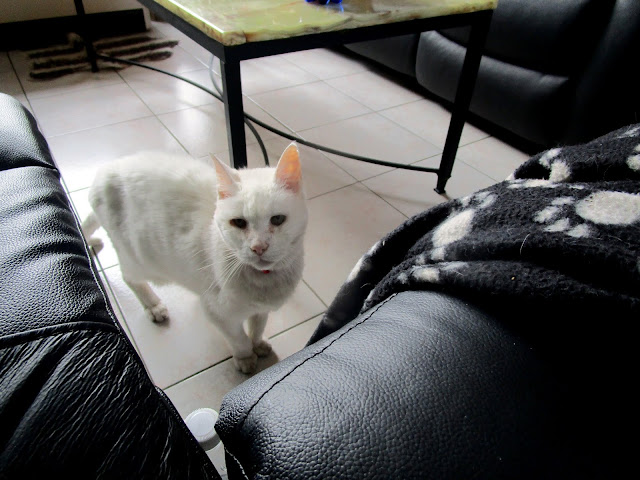 Poor Arthur misses his servant very much, there are no left overs from the table anymore because I am eating cheese and not ham or other things a cat would like ! 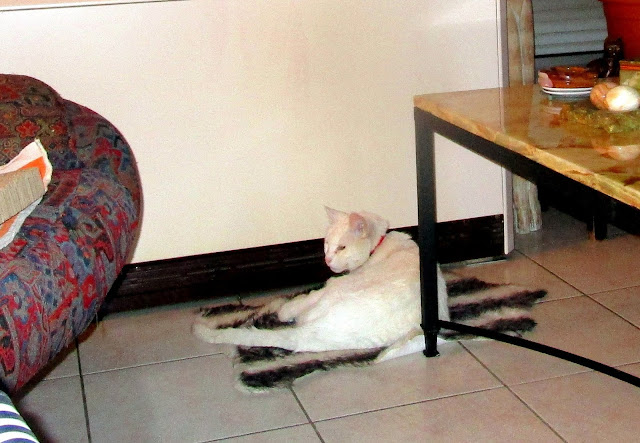 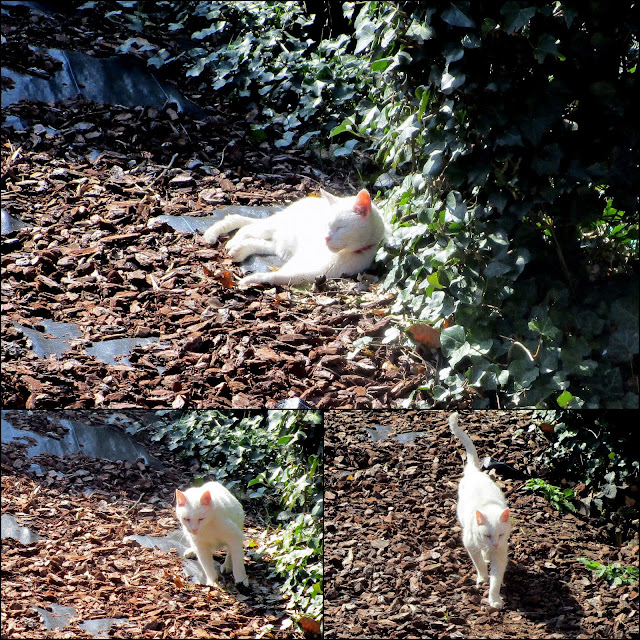 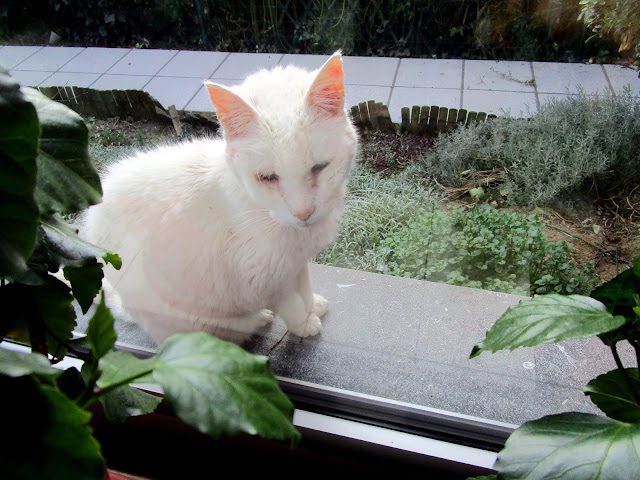 or he watches me from outside, looking inside where I am laying on the sofa ! 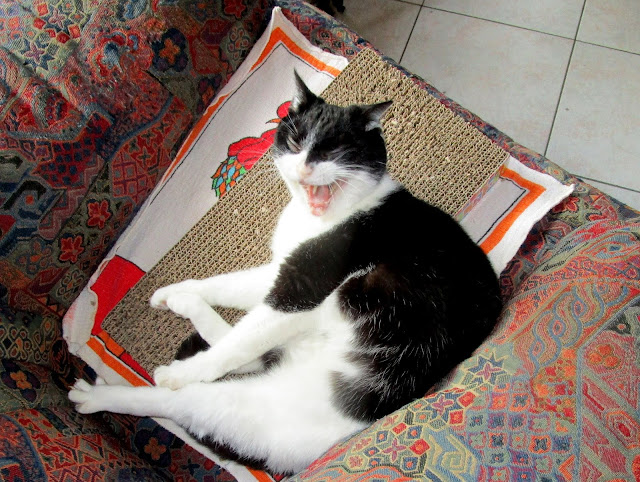 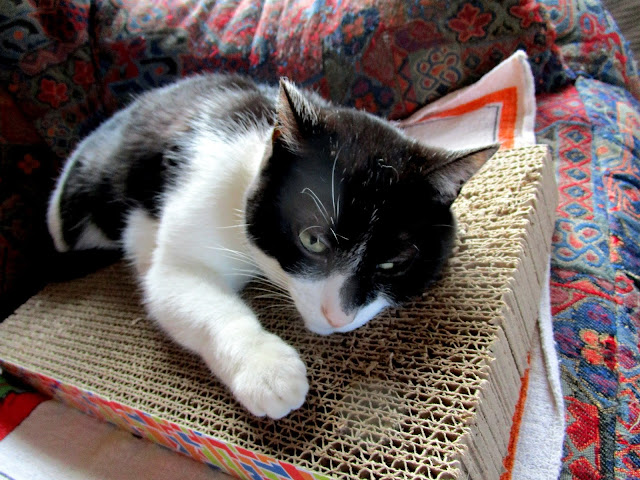 As Rosie is more "my" cat, she apparently doesn't care about Mr. G.'s absence.

Meanwhile he had his surgery everything went smooth, but Arthur will have to wait for a while until his beloved servant can come home ! He first needs to stay 2 weeks in a rehabilitation hospital.
Posted by Gattina at 8:56 AM

Oh poor Mr G this is scary for him. A bad ream that went awry in real life. I hope the two weeks pass in a flash and he is back home where Arthur will get is 'proper' nourishment. ;-)

Marjorie and the Dash Kitten Cats

Oh my, those sort of dreams can be very disorientating at the best of times, but to fall and break a hip is so very distressing. We are sending our purrs and prayers to you all, and For Mr G's speedy recovery to being able to distribute Arthurs food ;)
Get well soon purrs
ERin & Mrs H

We are so sorry about Mr G and send purrs and prayers a plenty to you both. Arthur you will have table treats at some time you just have to be patient.
Timmy and Family

Purrs and prayers for your family. Sounds like a horrible week, but I love that you posted those precious pictures for us despite it all - thank and best wishes to all.

Ugh. That sounds like a very tough week. We send purrs and prayers that both you and Mr. G get better soon.

OMC those dreams are not nice, kitties. Healing Pawkisses for Mr. G and hope he gets well soon. I'm sure that when he comes home, you nurture him very kitty good❤❤❤

oh my this is awful! We pray Mr.G is on the mend soon!

Arthur is such a good kitty to lead you to Mr.G instead of kitchen. I’m so glad Mr.G’s surgery went well. I hope he will be back home soon. And I hope you have recovered from flu. xo