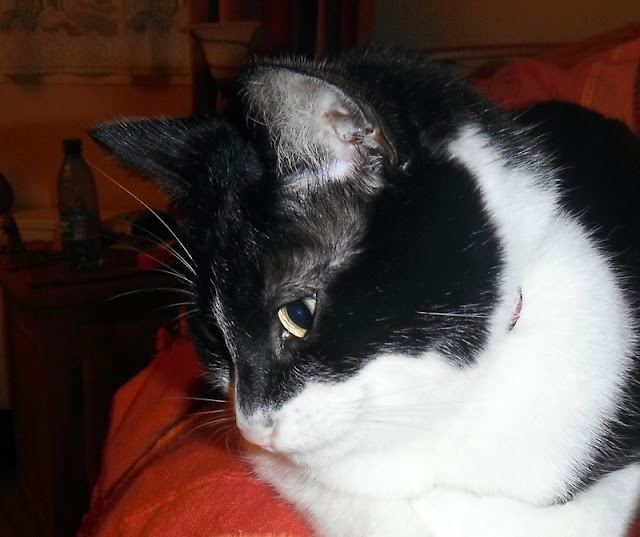 Oups it went off ! I hardly touched the button 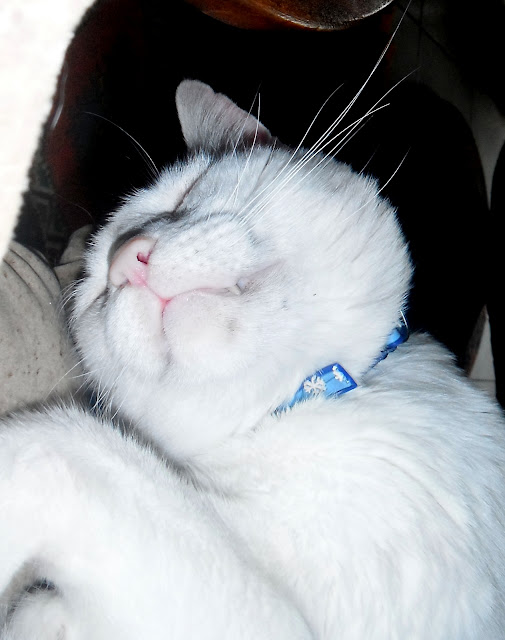 Take my paw and push the button, I am too tired for selfies ! 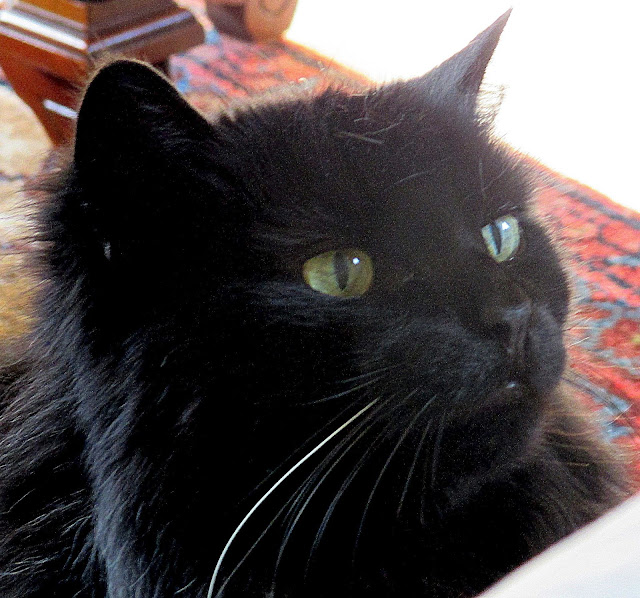 The cats are happy, they can play outside ! 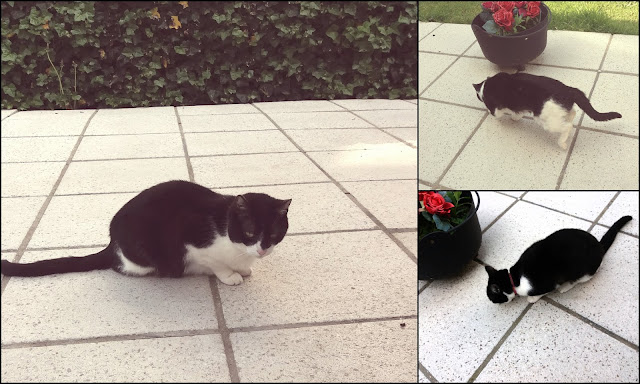 Rosie after having watched a little bug for at least 10 min, sniffed at it, pushed it with her paw, but unfortunately it was a lazy bug (not lady) which didn't move, so she decided to eat it ! I don't know if that is good for her health, at least it was organic ! 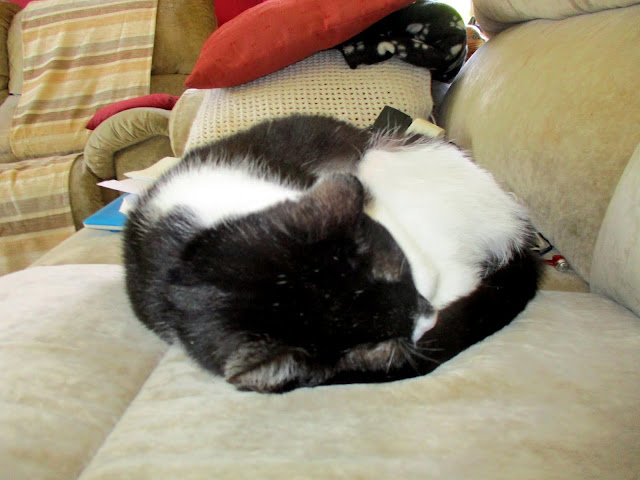 Of course after this exciting bug hunting, Miss Rosie was tired and took her snail position for a little nap ! 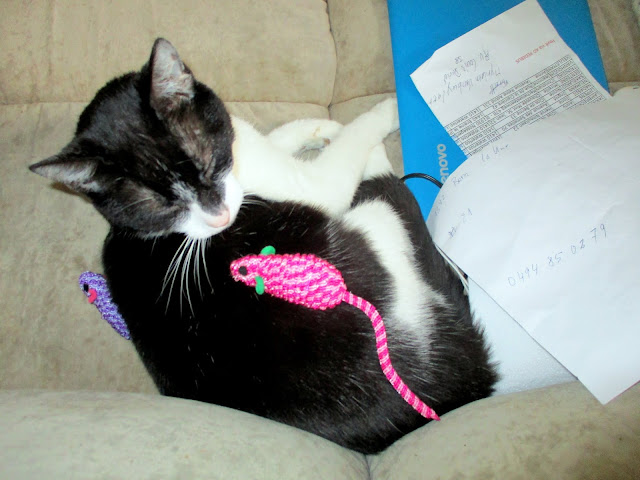 I had bought three mousies for her to play with, because I found that she slept too much, but she didn't want to move and the mousies didn't interest her at all ! 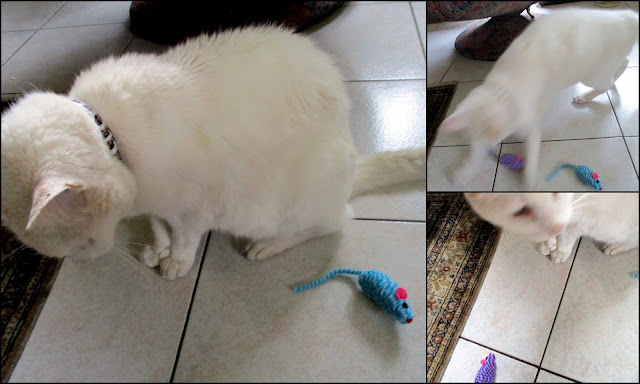 But Arthur !! He suddenly discovered that there was still a young boy sleeping in his body, who wanted to wake up and play, which he did and he chased the mouse around threw it in the air and was quite busy for a while ! 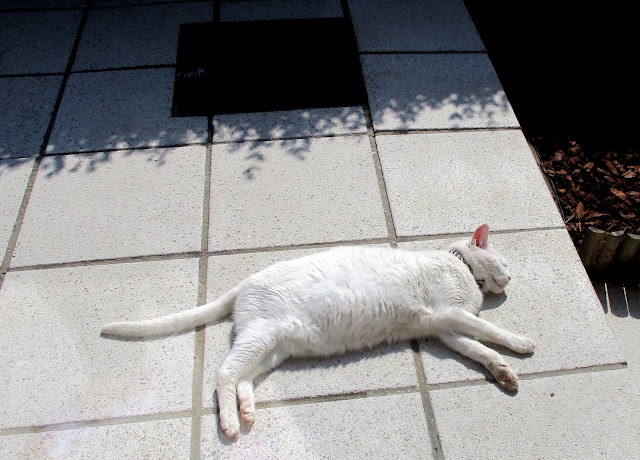 With the result that he too was tired and decided to take a sun bath ! I think he hoped that his fur would bleach in the sunshine and become more white, as for the moment he looks a bit pink because he had rolled in the red gravel ! 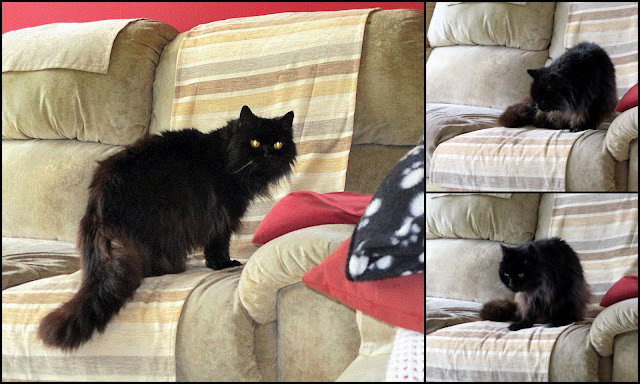 Kim too did some exercise and jumped on the sofa. She is a bit slow, but still she manages. 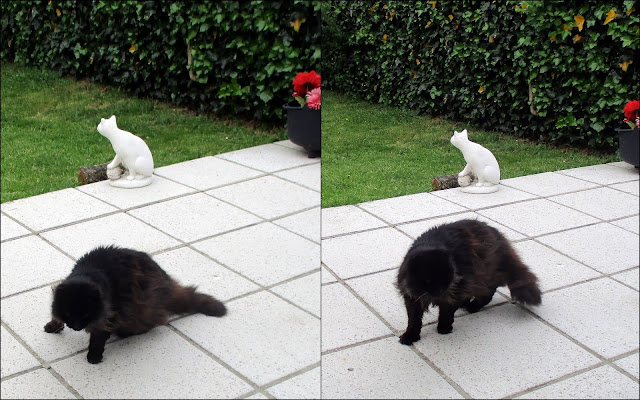 and when it is not the sofa for a nap, she likes the tiles on the terrace. They are warm from the sunshine and that is good for her old bones ! 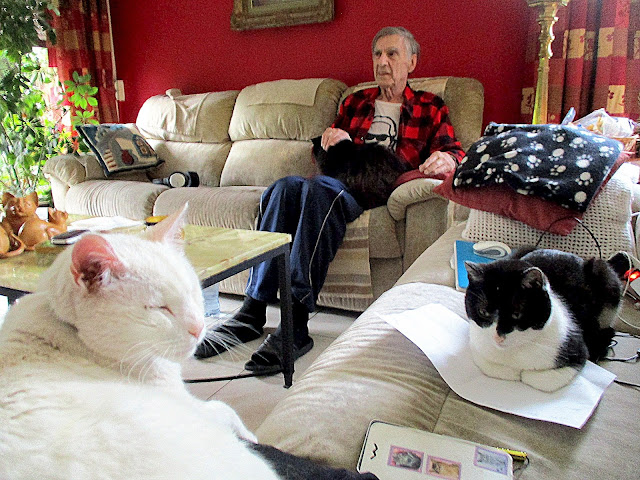 This represents a still life, our living room in the evening, watching TV with Kim on Mr. G's lap Arthur or Rosie on mine  and the one who doesn't fit on my lap just naps besides. In this case Rosie.
And another week went by !
Posted by Gattina at 7:00 AM

I love the selfies, especially the tired one, it made me giggle!!

Bugs are tasty, and they're good for you!

Arthur's sleeping face is so funny. Kim is gorgeous! Purrs!

With the sun and fine weather so everyone seems so enlivened in your home, and great work on the selfies too, looks like Kim was the most willing of all 3 this week :)
We love the bug hunt Rosie had, though I guess that bug thinking playing dead would work was sadly mistaken MOL
Toodle pips for a great warm and happy week ahead!
ERin

Great selfies, you three! Kim's is gorgeous, and Arthur and Rosie's made us smile! :)

We love all the photos, especially the one with the cats and Mr. G!

Arthur sure looks snowy white to me. I bet all that red gravel dust you mention disappears like magic after he gives his furrs a good lick. I agree with Rosie, if the bug is too lazy to move it's gonna get eaten up! Tee hee hee! I luv evenings on the sofa with my family too. Hugs! -Valentina (& Mom) of Noir Kitty Mews

So good to know that the outside is avialable for you to play and explore again. Great selfies btw.

Three cats and only two laps so one cat always misses out. I think you need a lodger in your spare room to provide another lap.

Nice to see you all, great selfies.

When you can't push the button on your own selfie. It's time to call it a night. The weather looks beautiful there. We had to much rain here last week. Thanks for the share and have a great rest of your week.
World of Animals

Everyone looks to be enjoying some nice, spring weather.