According to the awful rainy and stormy weather, my cats lead a very peaceful life, they definitively have the good attitude they sleep until it's over 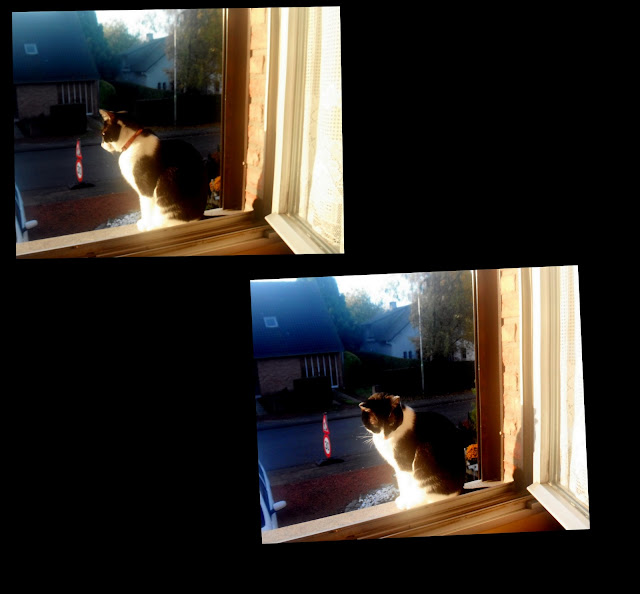 For a few hours the sun was shining and while I was making my bed, Rosie took a sunbath. After I had taken these pictures it didn't happen again ! 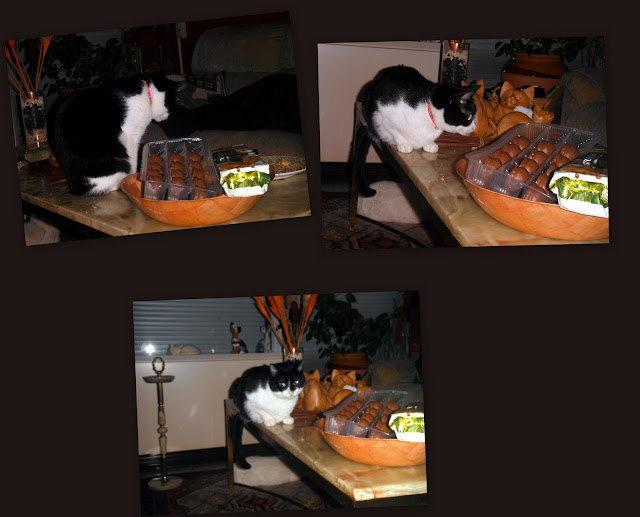 I had put a big plate with choclate covered marshmellows and other goodies on the table because TV inspires you to nibble something. Rosie had seen Arthur who apparently loves them because he had tried to eat one ! She inspected the plate, but didn't like it. Now I have to put the plate away when we are not there, because Arthur would eat them all ! Not very good for his health. He is a garbadge can in a cat shape. 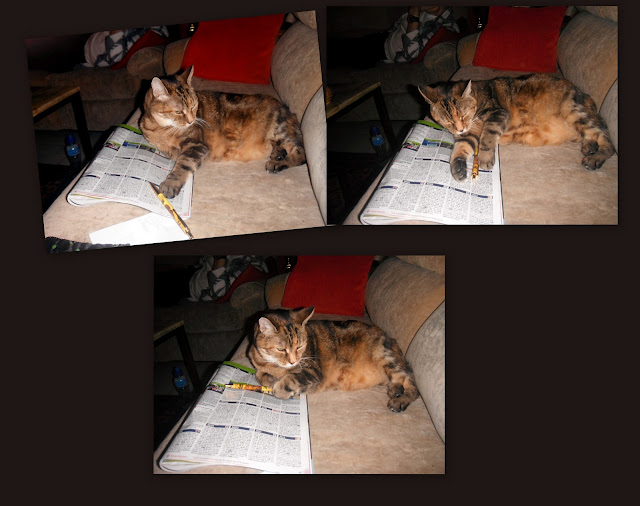 And while the others are rather lazy, Pookie who suffers from sleepyness the whole year long is the only one quiet active. She plays with everything she can find, and watches in front of the cat flap to chase away an eventual intruder, by screeming so loud that it wakes up the whole neighborhood ! You could easily think that somebody tries to kill her ! She also gnarls like an angry dog. When I ran down to see what happens and eventually rescue the half dead cat, I find a happy looking Pookie sitting there, only her tail is still puffed and looks like a fury Christmas tree ! 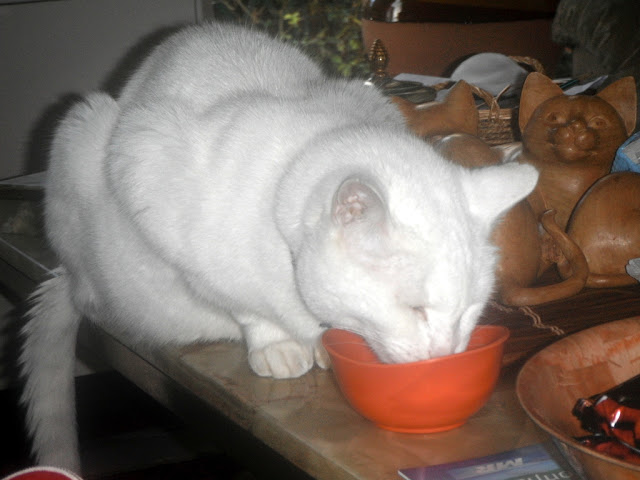 Arthur follows his hobby the whole day long ! And he isn't even what I would call fat !!


In the evening the still life looks always the same : 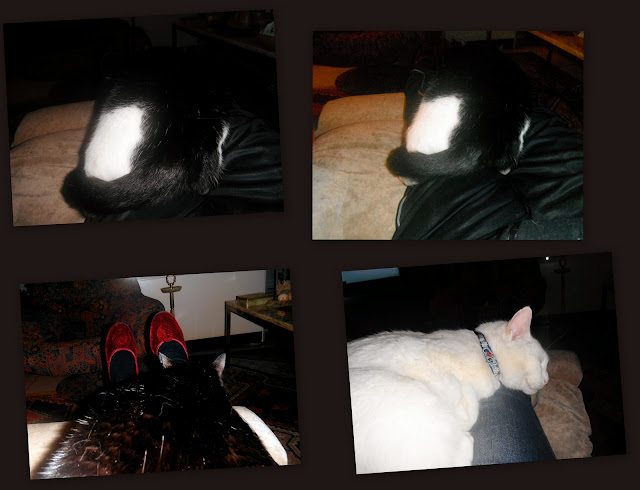 There is a sleeping session on my lap, in turn Rosie, Pookie and Arthur. Kim of course never naps on a lap !

Chocolates are toxic to dogs and cats. Hope Arthur won't eat them.

That photo of Rosie enjoying the warm sun on the window sill is absolutely lovely!

Of course, the last photo is best as we love doing that too. Purrs!

Pookie and I are obviously the same - we're both winter types who come awake later in the year :O) Thank you for your kind words about Posky x

LOL. Tutu is the tortoiseshell version of Arthur. She eats everything! Which can be very stressful as I have to worry about her all day long.

I think Pookie is checking the TV guide in the newspaper, then she will try some of the marshmallows.

It's been like that here the last few weeks with all the rain but at last we have been able to get outside for a while before the cold makes us go back in.
Luv Hannah and Lucy xx xx

We are glad you had some sun, if even for just a few hours! We, too, love that last shot. The kitties look so peaceful and dreamy!

Its my chief time to fill someone in on on this forum,neutral wannat reap some friends here.if its not allowed to transmit on this panel,please erase this thread.Nice to adjoin you!

I am glad that Rosie got a little sunbath in before the rain came again. I guess that Arthur feels that if you like to eat it, it must be good. I am glad that you get kitties napping in your lap. Neither of mine will do that, though they will spend some time in my lap and Oja will lie on top of me and nap if I lie down to read on the couch. Thank you so much for your kind words about Herman. You are right. The house would be unbearably lonely without
Spyro and Oja.

ooohhhh Arthur is just like my Gnäll (wich roughtly translates as "Whine"). I offer her catfood and then she stare at me: "I want human food human go and get me some leftovers"
They (my 2 cats Tiger and Gnäll) get leftover food mostly pasta, potatoes souce and some cooked meat.
Tiger is not to fond of left overs though...

I have a garbage can cat, too. I think Sissy would eat any form of "people food" there is!

OMG Arthur and Target could set up a club for Garbage Cats!