Since yesterday it became a little warmer and for the first time since two weeks we reached plus temperatures in Celius. Today it was 1° C (32 F), but as it is foggy and and rather humid my cats prefer to stay inside. 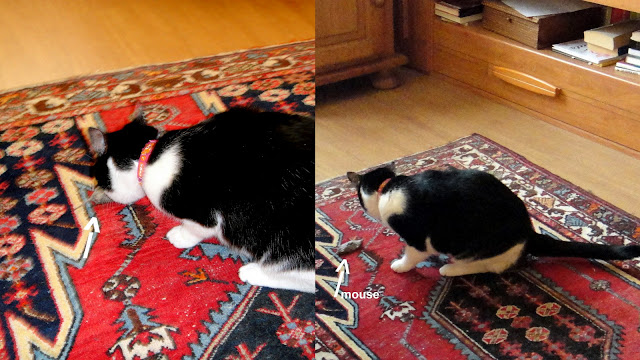 While I was "working" at my computer I saw Rosie jumping in the air, and playing with something which at a closer look turned out to be a REAL mouse ! Fortunately not hurt, but dead. I told Rosie to be ashamed that she had killed that poor thing and burried it in the bin.

Rosie WAS ashamed as you can see 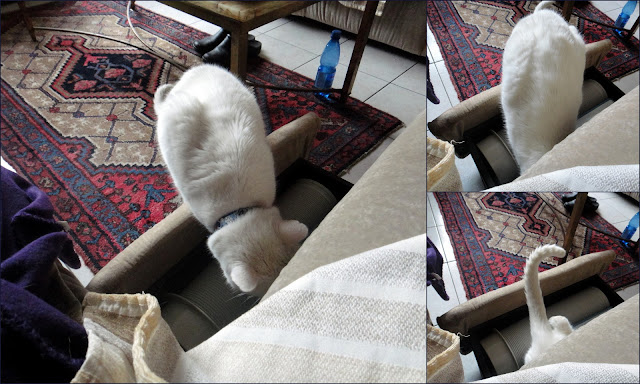 Arthur doesn't know what to do with himself, nobody is in the streets, so he is looking for new napping places in the house. Here he had discovered that there is a drawer under the sofa, opened it with his paws and went inside. Apparently it wasn't comfortable enough, because after a while he came out again. 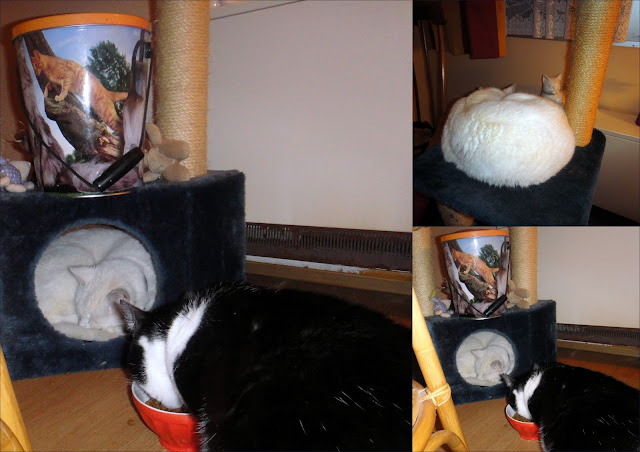 He decided to sleep in Rosie's cat tree, where it was nice and warm as it stands near the radiator. 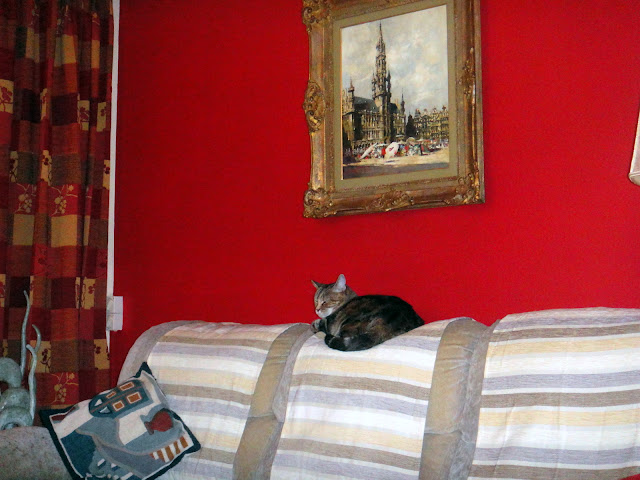 Pookie plays decoration the whole day and shares her activities between eating and sleeping. 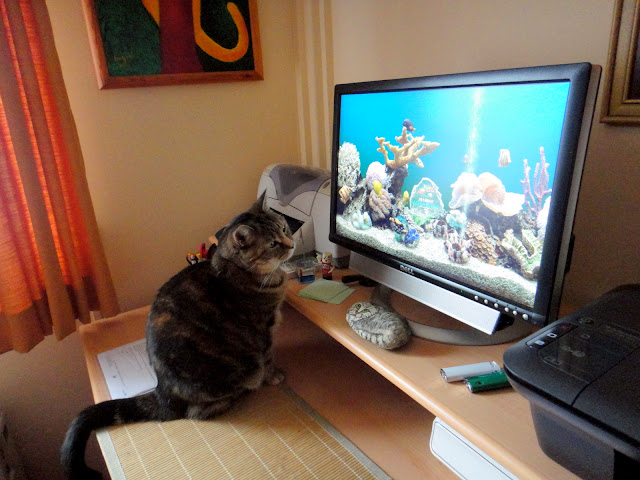 But sometimes she also does a "WII" exercise 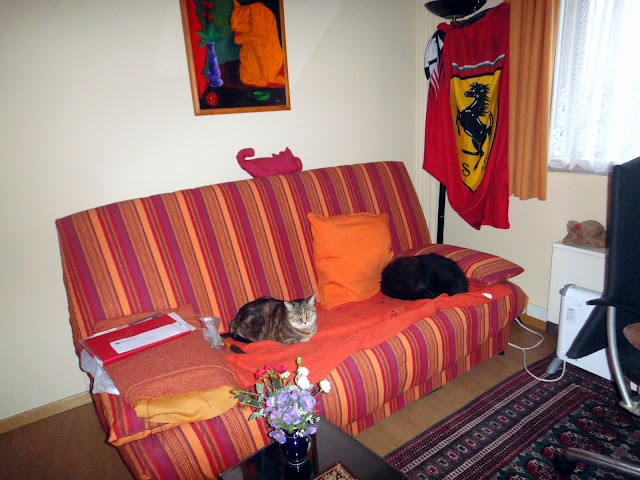 After a week from hiding under Mr. G's bed when the kitchen door was locked, Kim finally understood that nobody wanted to take her to the vet or to the groomer and she started to sleep in Mr. G's office on the sofa. And during the nights she even sleeps on his bed !

But when she sees me she still prefers to disappear ! Just in case ....

Please try to visit all those who leave a link here :

LOL Rosie's ashamed "my bad" photo is really funny. We were thinking about you kitties when we hear so much snow in your part of the world. Take care, stay indoors and cuddle with your mama.

Pookie is like Sam...he mostly is a decoration, too! Poor Rosie...she really does look ashamed! lol That's a very pretty collage, too!
Hugs, Cindy, Buster, Rudy and Sam

I see you kitties are all keeping busy, even if it is cold and foggy outside! Rosie, I know you are not really ashamed about the mouse, and I want you to know I am proud of you for being such a great hunter!

Rosie's shame made me laugh! And Pookie's WII - LOL!! Am glad that Kim has relaxed enough to enjoy the warmth in the house. Have a great week xx

LOL that's not usually the sort of WII I associate with a cat! Rosie's shame is just for show ... trust me!

The weather is a bit warmer here too in Wales. We are looking forward to spring :)

I can see that Rosie looks ashamed, but she actually shouldn't. I detest mice and i am glad every time Amidala killer queen catches one. She's never allowed to bring her victims into the house though. way back,in a cat free era of our lives, we had a mouse under the kitchen sink. Gunnar had to go and buy a mouse trap and I denied to open the cupboard door until it was safely put to sleep forever. Cats are killers by nature. It's OK with me as long as my crystal inventory is left in peace. Besides we too have 1 + today and then Amidala is playing outdoors and sleeping indoors mostly.
What wonderful, carefree "people" they are.

Rosie is a great hunter! what a story!She is so cute in that "ashamed picture"!
Today we got some snow again in the morning. My poor mommy run outside to recover the garbage can because she thought the snow could be a big mess outside.Then she said "look Luna, snow!Perfect for Valentine's day!".Sign...
Of course I totally ignored all things and keep with my duty, I mean...my nap time.
And no snow by now.
purrs
and Happy Valentine's Day to you all!
Luna

Rosie is quite the hunter. Not sure if Luna would be able to catch the mouse, though she would probably be excited to see one. (I would be less excited to see a mouse here.)
Arthur always seems to find ways to be amusing, even when stuck inside in cold weather :)

Even though they are inside, it sounds as if all your cats have important things to do (including sleeping and eating, of course). :)

Happy Valentine's Day to you all, dear friends!

What a great 'daily day's history' -
no day is like the other. Your catfamily is so interesting because of all your wonderful characters!
I wish you a happy Valentine's Evening.
♥ly mjau and huge hug from Sia

Tehehe :)
I just LOVE Rosies I´m ashamed photo !
Arthur you must tell your mom to put some moore cozy stuff in that drawer so it get´s moore comfy to take a nap in :)
Pookie your aquarium on the computer lookes really nice !
Glad to hear that Kim is not hiding anymoore :)

Eish you a Happy Valentines Day !!

Admin said...
This comment has been removed by the author.
9:28 PM

Rosie is so funny, "ashamed" in that picture!:) I love this blog. Adorable cats, and great stories ;)

Woof!
Every meow got a special place and activities to do on a pfft weather. Ours goes from rainy to sunny hot!