We have the worst August weather ever, cold, rain, the sun apparently moved far away. So what should my dear cats do the whole day. Going out ? Impossible they don't like wet fur coats. 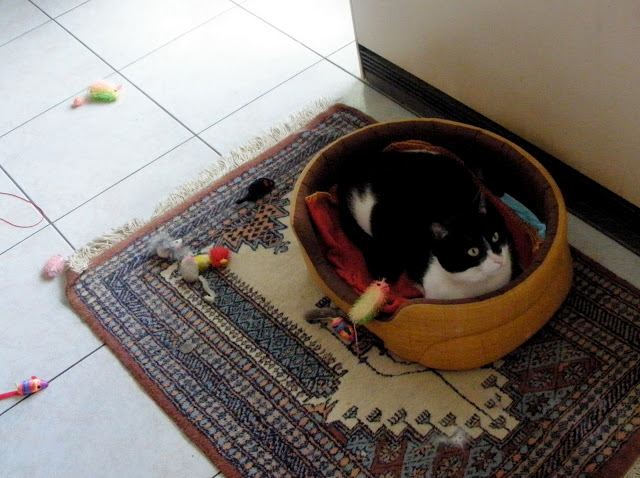 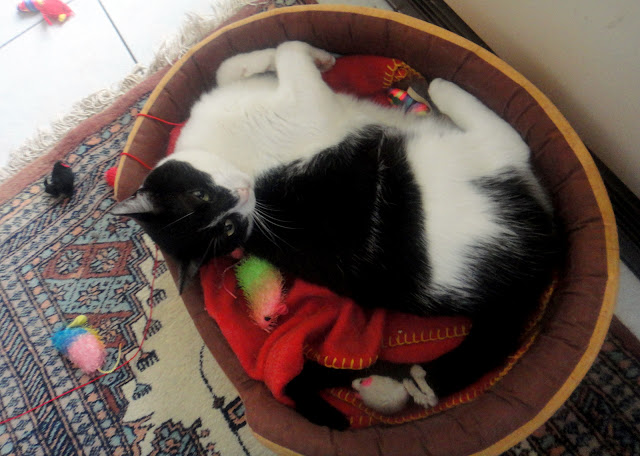 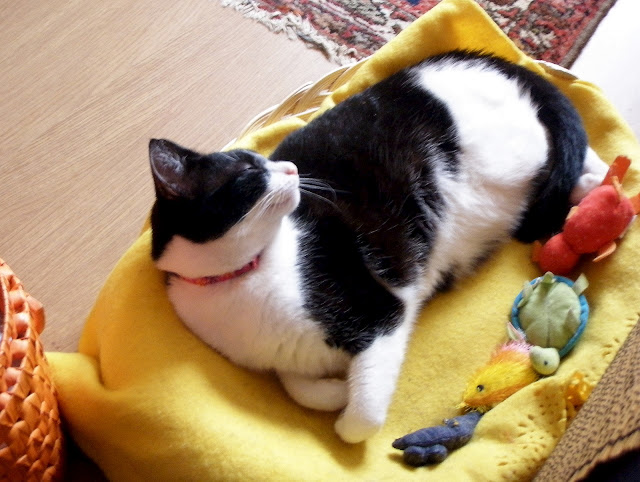 Rosie, the only one who ever sleeps in a basket moves from one to another and does a napping marathon. From time to time she gets up to run behind Pookie and then they hiss at each other. 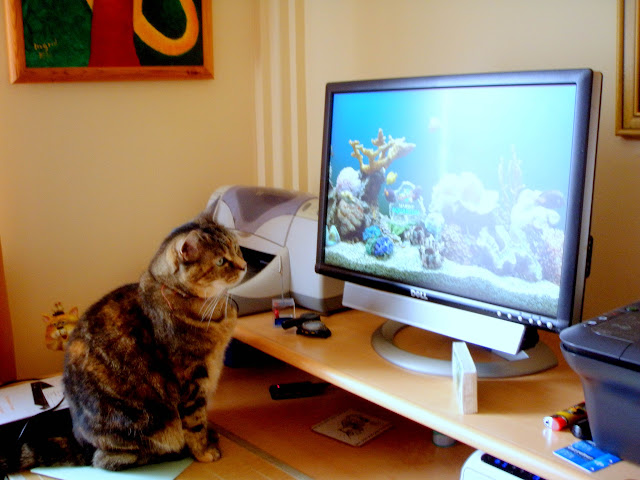 Pookie, when she doesn't sleep on Mr. G's bed, found another occupation, she loves to watch the screensaver an acquarium and tries to catch virtual fishes, which of course doesn't work. But she keeps on trying but so far without any success. Meanwhile Mr. G waits impatiently to be able to use his computer again. 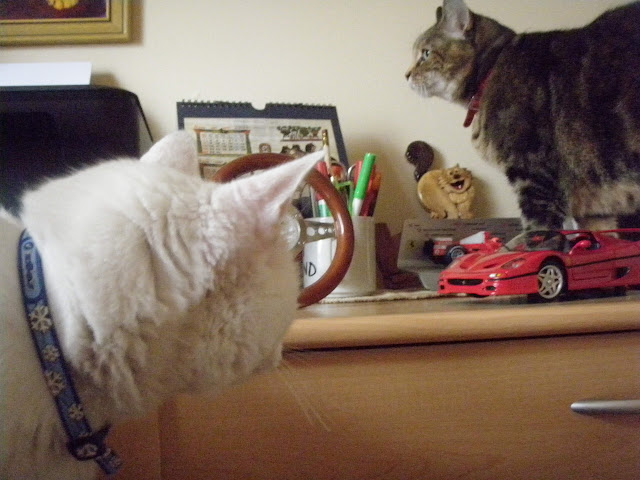 Arthur too loves the computer, but he prefers to walk on the keyboard and change programs. 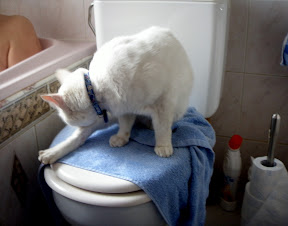 He follows Mr. G. everywhere even when he took a bath, probably hoping that he would take some Mortadella with him in the bath tube. He is the only one who even goes out when it rains and comes back wet like a sponge. 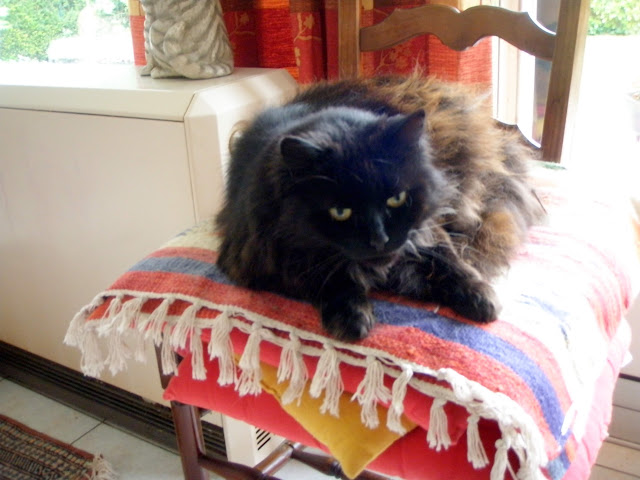 Even Kim moved inside and plays the princess and the pea.
Posted by Gattina at 5:30 AM

You guys sound like you are really bored with all that bad weather keeping you inside!

Oh I like to watch the screen saver fishies too.

Ha, I know that walking on a key board cat trick. Our Amidala does the same when she thinks we give her to little attention.

After two months of rain, I'm happy you have shared some of your summer sun with us here north!

I think we could do with some of your rain here, then I wouldn't have to keep watering the pots in the garden! I love the way Rosie moves beds, and that screensaver is great. Arthur is as funny as ever, and thank goodness Kim has come in for once!

We're hoping you get a little sunshine soon! We forgot it was Tuesday but we are blogging. Hugs to all the kitties - but not to Arthur until he's dried off!

Luna loves to go out in the rain, like arthur too. When she comes back her long fur is totally wet. Than she loves to dry on the ironing board ...on the fresh dried laundry...Cats... tztzttz

Aw Rosie you are so cute in your bed with all your mousies. Hope the weather improves soon!

Well it looks like yoor furries have wet weather sorted ~ they have nice things to do to occupy themselves. Rosie looks very comfy!

Most of the US has been having extremely hot weather - though where we are it's been quite cold, too. It's too bad things can't balance out a little bit better that way.
Rosie looks very cute in the basket.

I like how the cats are interested in the virtual aquarium, too. Luna had no interest in looking at the screens until I recently got an iPad app that features mice running around on it (it was specifically made for cats.)

Hi there efurybody !
has not been much of a summer in Sweden neither :(
Lucky us that we have a home to cuddle up in :)

What fun to be able to go fishing on the computer - we just get to look at a beach scene on mum's screen saver. It is chilly and dampish here today - we were promised a nice afternoon but the weather lady must have meant next year!! Have you allowed Mr G to go on your computer yet Pookie?
Luv Hannah and Lucy xx xx

No wonder Rosie needs a nap with all those toys to play with!
Here's hoping for some warm weather...

Hey Rosie...maybe you can spend the days tidying up your mousies! I hope you guys get some sunny days soon....

You´re so beautiful... every cats on this post are so cute! Love!

rosie's toys lined up in her bed are so cute! I have Cody's in his bed like that!

I say they make pretty good use of the bad weather!

Even though your weather has not been good, we enjoyed seeing how you are all spending your time indoors. We love that Rosie tries out all the beds ... she is like Goldilocks trying out all of the beds in the story of the Three Bears. :)

Pookie, our cats like the screensaver fishies, too. Let us know if you manage to catch one, okay?

Arthur, I don't think Mr. G. takes mortadella into the bathtub, but it can't hurt to try, right?

Kim, that looks like a pretty good place to relax ... very cushion-y. :)