Cats are really intelligent ! I had the prove on sunday. We usually eat in front of the TV and Mr. G feeds the cats. He can't resist their demanding eyes of starving cats. So he gives little bits and pieces to his little darlings. I don't, I want to eat in peace and prefer to give them something in the kitchen.

On Sunday was Formular 1 day in Brasil and Mr. G's only sport he watches on TV. He moved into my room because I wanted to see a film I had recorded for me on the TV in the living room. The cats were very disturbed by this strange behaviour. Why was he sitting alone in her room when it was eating time ?? They gathered in the kitchen and waited what happened. When they saw me carrying the tray into my room and hand it over to Mr. G, not even 1 min later I saw this still life ! 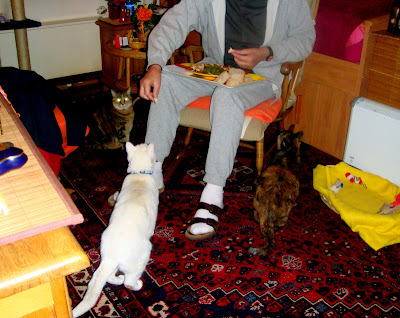 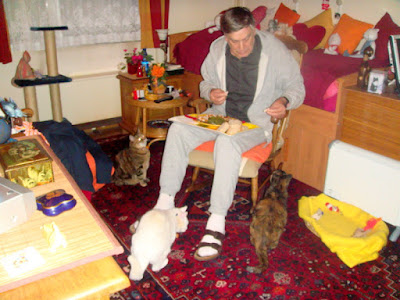 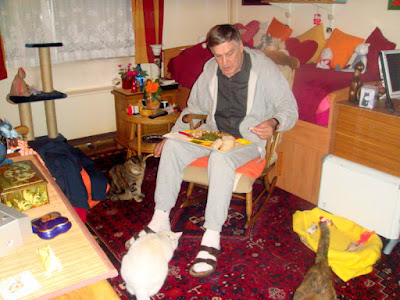 They all came except Rosie and Kim to have their share of chicken !

I also noticed that Arthur sometimes has cast iron nerves ! He was sleeping half on my mobile when it rang. He didn't even open an eye when I took it and answered ! But when I drop a fork in the kitchen, he gets a nervous breakdown ! 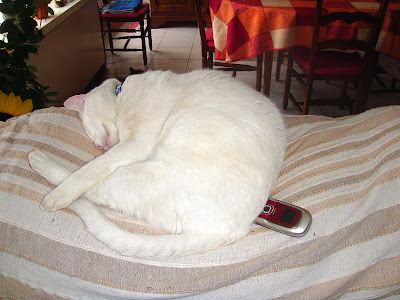 Arthur sleeping half on my mobile 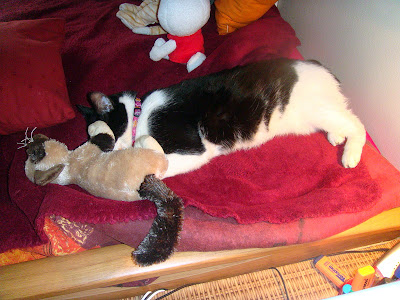 Rosie prefers a cuddly cat to sleep with

Lately when we have chicken, the
cats beg excessively for tidbits of
course we indulge them. I think their bodies are saying eat protein,
Winter is coming soon?! Have a
wonderful week! :)

That is absolutely true! They are also very routine, mealtime, playtime,and they will bug you until it gets done...haha!

So he's the softy and you're the toughy? Classic!

Prudence and Muning loves chicken livers sooo much! Yeah I have noticed that they too are smart as my dogs. They know if it's mealtime, especially when they hear the sound of plates, being set on the table, both of them suddenly appears in the kitchen. TADA! Is it lunch yet?

How exciting for the cats...there is something different. It´s very kind of Mr Gattino that he shared his chicken with the cats.
Hehehe, Arthur is like Olli. Nothing can disturb his nap, not even the vacuum, but if he hears something in the kitchen he comes immediately.

Cats are smart. They know who to bully and ask for tidbits.

I know just what you mean. You dont even have to say the word chicken, just thik it and whoosh here I am.. Lovely photos and your dad is real nice to share his chicken with you.. Hugs GJ xx

Sassie wants to eat with us. She is usually disappointed because if we feed her she tries to jump on the table.

Those are such good pics. I had to lol at Arthur getting upset over dropping a fork. :) Happy COT!

Our cats do the same thing when we eat! Ofcourse I am vegetarian so they sit in from of Pop! Love your spooky blog header.

We always hang around our beans if they're eating. We look pitiful AND IT WORKS EVERY TIME.

Those are really cute pictures with the cats gathered around like that. Sometimes they want food, but sometimes they're just curious or want the company.

I have no food at the moment but Luna is still covering around and looking up like that.

Lovely post -- cats are indeed very smart especially when it comes to figuring out how to get their favorite foods :-) I loved the photos!

Hopefully I did our first post for this meme correctly!

Too cool They have Mr G wrapped around their paws. Love Arthur on the cell phone. And Rosie of course is adorable.
cindy

My cats also love chicken. They smell it and come running. Love Arthur's attitude toward the cell phone.

When it is dinner time here, I always clean the plates. I demand a tast of some of the food too. I will scream forever until I get my dinner share!

hi..they are such cute cats..

That is so great they could eat chicken!!
Must be really really delicious!

My COT turn out to be Thesis Tuesday yesterday..sigh..

I am sorry I wasn't home to post my cats yesterday. I enjoy Tuesdays Cats a lot.

Last week Noir kindly presented me with a lovely stamp. I have passed it on to nine others and you. If you want, it is on my last Wednesday's post, Ovtober 14, titled Thank You Noir.

I hope you are having a great day.
Iris