Perhaps you think that I always talk about Rosie, but she is the only still active member in my household at this time of the year. 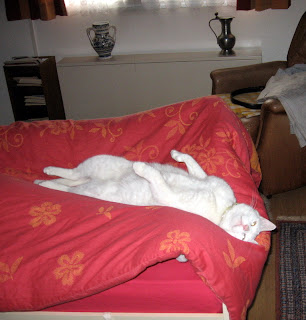 Green thumb paw Arthur retired into a deep hibernation, just like a bear. He does an everyday sleeping marathon since no neighbor is in his garden and no workers in the street. 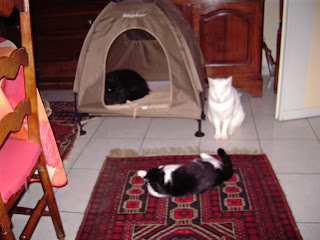 Kim has decided to finally sleep inside, apparently even for her it is now too cold outside. In a superhumanly effort Mr. Gattino has carried Kim's tent from the terrace into the living room (10 steps) to take down the tent and put it away for the winter. Since two days it stands there (he first has to recover from this effort) and of course Kim moved in again. (Here watched by Arthur, Rosie and Pookie, you just can see her nose).

A few days ago, Mr. Gattino asked me why I (it's always me !) had pulled out all the toys out of the cat house. I hadn't done it, I would rather put them in. 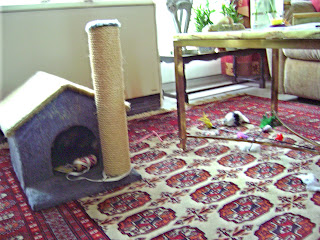 The cat house, and the toys under the table ! 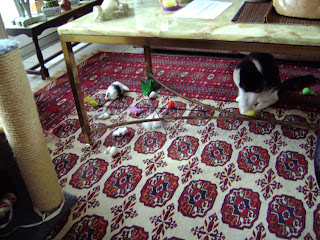 It was Rosie who had done it. What a work ! 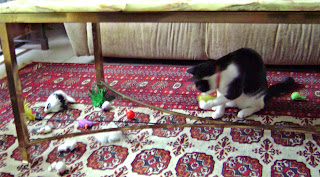 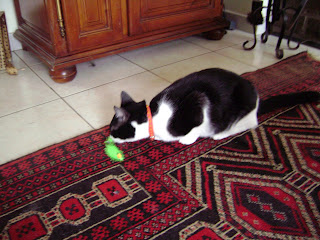 one last mouse to be put away !

Rosie now 7 months old has become the perfect housewife. She always is busy to put things in order. 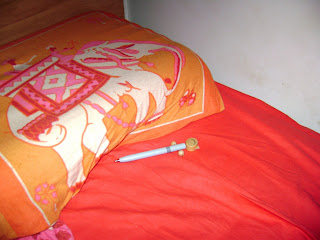 She even found a new place for my ballpen ! Only it was a little hard to sleep on it. Everthing now which we find at the most strangest places was ranged by Rosie. Socks, underwear, even a clothes pin, which she must have found in the basement. 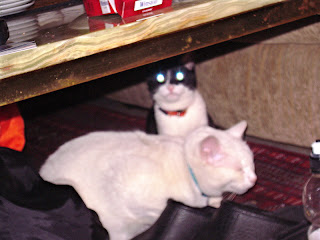 She also thinks that Arthur doesn't take enough care of himself and his white fur. Therefore she washes him for hours. 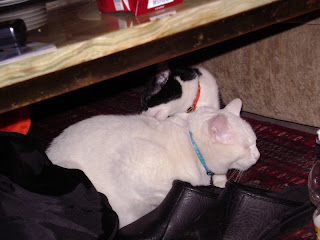 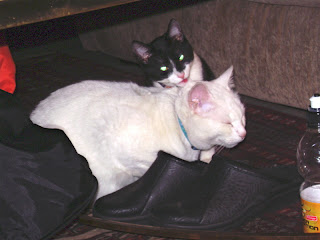 After a while Arthur gets fat up and gives her a slap with his paw. This doesn't impress Rosie at all. She jumps on him and energetically pulls him down and continues her washing until she decides that he is now clean enough.

She also is a very picky cat. She has never broken anything. She only scratches on the scratch post or on a doormat and has never touched anything else.

On top of that she is as punctual as a train. She eats whenever I get up (i.e. Lisa makes me get up) but her real breakfast she wants to be served at 9 am ! Until 11 she plays or put things in order. At 1pm she stands at her food bowl. After that, you don't find her anywhere but in her basket until about 3 pm.

She takes her "tea" and plays and ranges again. When she gets tired she would nap with the others in other places. In the evening she watches TV with us and plays. At around 10pm she gets nervous it's time to go to bed. If she could she would put me to bed. When I am too late and still busy she shows me that she is not happy at all. When finally I am in my bed she comes and snuggles against me to kiss me good night by washing my nose. But when she starts to wash my whole face, I have to stop her because she has a quite wet little tongue, so I put my hand on my face. Then she would settle down with her little head just besides mine. She has never disturbed me during night either.

She usually goes out twice a day now. Once in the morning once in the evening. I know it because when she comes back she jumps on my desk (never on the keyboard !) to kiss me as if she hadn't seen me for 20 years and because her fur smells so good of fresh air.

Honnestly I have never had or heard about such a model cat. She also is the only one who always takes her daily naps in her basket. The others nap everywhere. 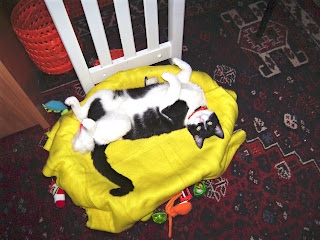 Toys are supposed to be out. How is Good Cat-Cat supposed to play with them if you put them away?

A Tuxi cat must be very active, just like Adan. He is over 10 still love exercise~! So, I think that is good for Rosie~!

She certainly needs to play when she is young now. When she older, there are lots of time to let her rest~!
I think Kim is very cute to stay inside, the weather is so cold, stay inside keeping warm is also as good as exercise all the way like Rosie to keep hot body~!!

You take care of them super well :)

I actually snorted laughing when I saw that first photo of Arthur! What a guy. Mine are doing the exact same thing: lying around forever. Except my guys are already getting fat! Rosie is such a great cat. I'm so glad you have her.

What a perfect cat little Rosie is! Do the others make fun of her and call her a Goody Goody behind her back?

My kittens love "arranging" too. Can you imagine what my house is like with three kittens and three children (one of whom is almost 2) "arranging" everything? It's truly a wonder I can find anything at all.

I love those photos of Rosie washing Arthur. It's funny when they get fed up and give a smack on the face isn't it!

I got myself organized a bit sooner this week and my post is up. Enjoy your week! (I hope you have recovered from the shock of lovely Egypt to freezing Belgium!)

I cannot believe what a beautiful girl Rosie has become!

Family cat in winter is very organized! Love the tent! Hibernation but in good conditions!
Just a little coucou before going to work; I come back in the evening!

Rosie is very punctual. I love your story about how she "arranges" everything. Arthur must be spotless these days, with Rosie helping him wash.

Wow, Rosie, you have quite the regular routine! I spend most of my day playing. :) Good work with the redecorating. That is one of our important cat duties.

Your photos are funny like every time
Perfectly Rosie !
I´m late today, like every tuesday, sorry.
Have a nice day!
Ich bin wie immer in Eile, Gattina!

Hi there; I'm not a regular "cats on Tuesday" participant, but this week I decided to play along and tell the world about my son's cat.

I am always tickled when Calista does like Rosie and the pen and I find things like her ball in my shoe in the closet. It is so sweet that they try to organize their toys!

Rosie is just a very special girl anyway....some cats just are that way. But I still love old Arthur too and he looks great in his bear sleeping position.

Rosie is truly a treasure!

My cats have good time out whereas i'm worlking all the day from 7 h 30 and come at about 19:30 at home after job, shopping and others. It is a good thing we are living in south for them because the weather is so sweet in winter and they can stay out under the sun or in a big garage just for them if they prefer stay in. And of course they adore to stay in the house when we are again at home and Ticoune prefers stay in sweet places like my cupboard! I wouldn't keep the new resident if i didn't had so good conditions. Because when you aren't at home all the day, 5 cats can't stay alone! No? You have chance to stay now at home just to have time for the family cat! So they have their mom just for them!

Her Cats are "adorables"
I am sick and a bit dull.
Mom I buy medicines for my vomits, wait to be prompt well.
Mr Linky is in my blog ;)
I wait prove!

No doubt it's the cold and dark season.
Rosa and Felicia sleeps most of the time. Unless for some 10 minutes after they have put us to bed. Then they run and play for a while.

We are very busy for the moment.
Wednesday we will help our second son with moving "things" from the old to the new appartement - then we must go home and move everything away from our windows. Which are to be repalced on Thursday - before I drive to Stompa, where Rosa and Felicia will stay for allmost 3 weeks when we are away.
On top of that' it's something called work. I have a group of over 60 going to Nice - for a business event - without me - which means everything must be communicated in detail beforehand.
Friday is packing and Saturday leaving. Buenos Aires - here we come. Bought a new camera to day - water- and dustproof.

Those are adorable pictures as always! What a busy one little Rosie is, moving toys and bathing Arthur and moving pens around :) I'm glad that Kim is inside now.

Rosie must have a big dollop of Dutch or German blood in her. My Dutch family are just as organised and clock oriented as she is!

Good to see Kim inside. being out is fun but a fur coat isn't enough to keep out that sort of cold.

You've reminded me why I miss having a cat. We had to put ours down a couple of years ago after he got sick. I wish we could get another one.

My latest image is now up, too:

Hope you have a wonderful WW!

What utter cuties. Is there a cat out there that does not know the meaning of comfort! Happy WW

I will be happy to write a limerick for Rosie, now that she has developed a definite personality.

You know what, Gattina? Rosie doesn't know she's a cat...she thinks she's a houseproud human being! And it sounds as if she has an inner clock and like to be punctual about everything...obsessive/compulsive perhaps? Lol!

lovely little blog you have here!

Rosie is such a great little kitty! Altough she already has grown a lot. That's a fanstastic pic of Arthur sleeping. He, he..
Love

Coucou Gattina
Mine is up! What' the matter this morning? Every one is on monday still!!!
Perhaps I felt something? Hope all is ok !
I come back in the evening!
A tout à l'heure!