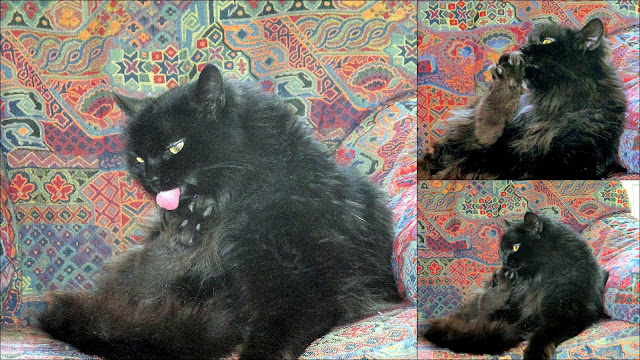 For the first time in nearly 10 years, Kim didn't run away when she saw me ! She even didn't care that I took pictures of her while she was busy to groom herself ! 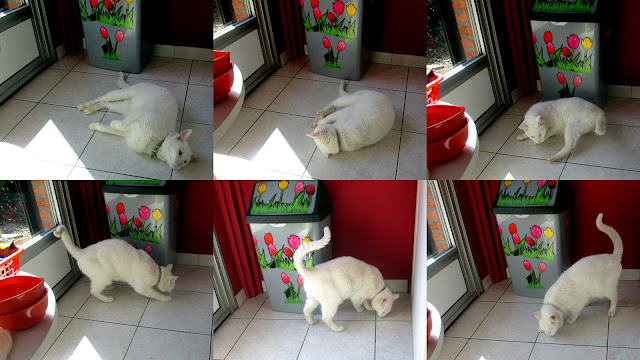 That Arthur is a special cat I know. But what he did this week just took the biscuit ! I had bought a repellent spray because Arthur still sometimes pees in front of the kitchen door. I sprayed the tiles and what happened ? He sniffed and sniffed and then rolled himself on the floor, he couldn't get enough ! And at the end, what did he do ? He peed in front of my watchful eyes ! I yelled at him, he finished and then ran away outside through the cat flap !  I should write a letter to the company which produces this "repellent" ! Instead I cleaned the wet floor ! 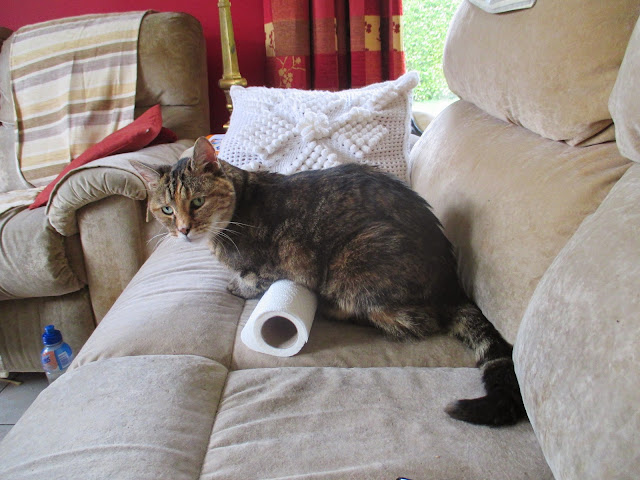 Pookie found a rather strange position to nap, she slept on the kitchen paper roll ! 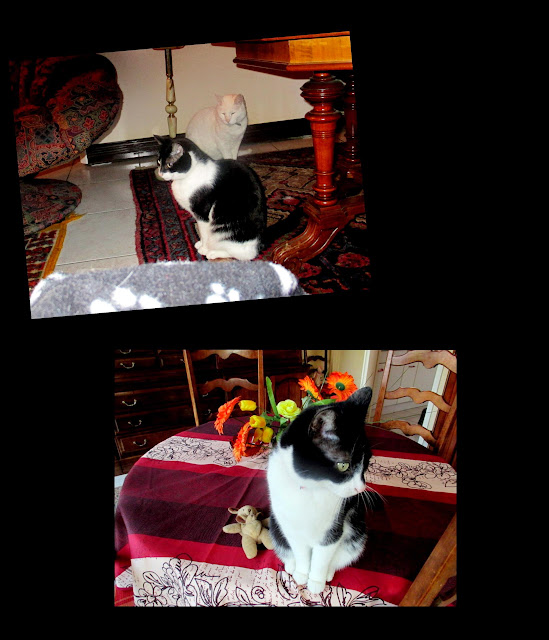 Rosie sits on or under the table and chairs and as soon as one of her companions appear she jumps or runs behind them which causes little battles and hisses. She is a real little witch !
Posted by Gattina at 6:30 AM

I don't think Arthur is going to be a spokescat for that repellant company anytime soon!

MOL so I guess today Kim is da highlight ;)

Me guess Arthur has new intruder for sure !

Your cats are so cute, it's amazing how they seem to be able to sleep anywhere!

WOW. We were shocked to hear about (and see!) Kim! How nice to see her featured. :)

How strange about Arthur. He is a funny cat, for sure. Though it is not so funny that he peed by your door, even after you sprayed the repellant.

Pookie, is that comfortable? Maybe you could bunny kick that paper towel roll?

Rosie, it sounds like you're being quite the rascal!

Nice to meet you, Kim ! Purrs

Kim looks very pretty. Arthur is a naughty one.

Thank Arthur for making me laugh this morning Gatina!! Maybe Pookie was keeping the kitchen roll safe for you in case Arthur did an encore!
Luv Hannah and Lucy xx xx

Arthur, they should call that stuff attractant, not repellant!

Lots of interesting activities going on at your house this week. Arthur seems to be a very territorial kitty with all that peeing.

Surely this is a site well worth seeing.