BACK HOME FROM VACATION

Just before I went on my holidays at the Red Sea in Egypt, I wanted to empty the dishwasher and Rosie discovered something new ! Clean dishes ! Of course she had to go inside to check if there was something else. 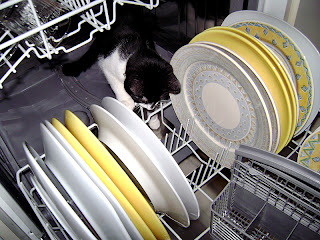 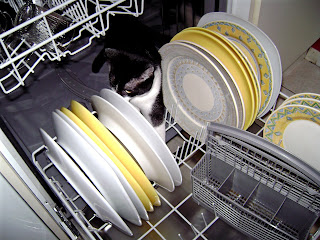 When my suitcase was packed and closed and I unplugged the cables of my laptop and I wanted to put it in the case, Rosie was sitting inside and she didn't like at all that I had to take her out ! 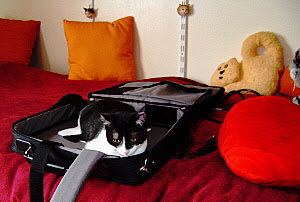 When I came back after two weeks I was warmly greated by Rosie who purred her heart out of herself and didn't leave me for a minute. Mr. Gattino told me that she had slept on my T-Shirt I had left on my bed during the days and at night she came over to him to wash his nose. I noticed that his nose was especially clean.

Pookie threw a glance on me and disappeared on a new place she had occupied during my absence, she was very offended and only came to say hello after an hour. But then she also purred happily.

Our neighbor my girlfriend had kindly watched over Mr. Gattino not feeling well and had to go to the doctor so she raked together all leaves in our garden for him. There was a lot to do as our wheeping willow had really wheeped a lot and it took her one and a half hour to rake and collect all the leaves.

To keep her company and watch if everything was done in the right way Arthur had helped by running behind the flying leaves and since there were so many on the grass he profited from the situation and digged his private toilet in there. But as a well educated and polite cat he of course closed the hole meticulously after having done his buisiness. 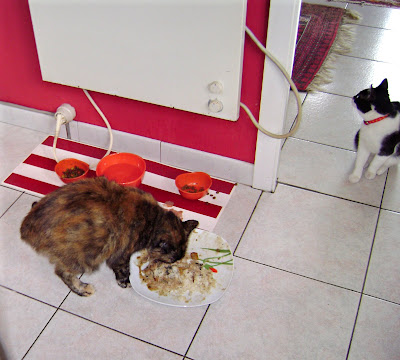 Away or not, Lisa when she saw me wanted to eat !! And as Mr. Gattino has fed her each time when she said a loud shy meauw he gave her some food. I can see the result ! I am not sure if she is happy to see me again because I watch that she doesn't eat too much.

I am not sure either if Kim even noticed my absence, she came by looked at me and then watched her TV the turning washing machine.

Mr. Gattino in eager to feed his starving cats had broken the special spoon I had bought for this purpose it was red with a cat head so he used an old spoon he found and it was ..... the silver sugar spoon of my mother ! It looked a little ugly to him and he thought I wouldn't like to use our spoons so he took the oldest one he could find. Haven't we chic cats ??? Eating with silver spoons ? Of course I use it too now at least this ugly spoon has a useful purpose. Since then it is shining !

Everything got back to normal life. Arthur playing with Rosie who had grown quite a bit in this two weeks.

Welcome back! It's great to see the cats again and to hear from you. They all react so differently to you being gone, don't they? I'm so sorry that Mr. Gattina was ill and I hope he is now OK again. I missed these kitties.

So happy to see Rosie again, and everybody~!
She does growing bigger, I believe Arthur is really a wonderful brother, do so many tender behavior to Rosie, I am so glad.

We cats can be a bit stand offish when the staff leaves us for too long (which is anything over 10 hours) but I am sure they are all very very happy to have you back! As are we!

Isn't it lovely to be greeted by a friendly fuzz? Glad you've been forgiven for abandoning them! When will we see pics of the holiday? Interesting area to visit so I'm dead curious.

I was also gone for about 3 days and the Spice Cats and Scarlett wouldnt leave me alone when I got home. I had to make up to them giving them some treats and spending some time with them on the couch.

Yes, your cats are very chic, being fed with a silver spoon, lol!
Love Kim's "TV"!

Welcome back, Gattina. We missed you and your always funny cat stories and pictures.
Is Mr. Gattino doing better now ?
I love the pictures when Arthur is playing with Rosie.
Typical for cats to use a heap of leaves for a cat toilet.
Funny to see the different behaviour of the cats.
Have a nice day !!!

Welcome back! The cats are looking great. They must have missed you a lot!
I did my CoT about cats names today.

Welcome back! It sounds like the cats were well looked after while you were gone. Rosie, you look very silly checking out the dishwasher!

Welcome back! I know everyone including Mr. Gattina had to be so happy to see you!

How nice of your neighbor to rake the leaves and especially nice for Arthur to help out by keeping her company! The pictures are wonderful, as always...Rosie in the dishwasher was so funny.

Ah life is good! Home with your babies who missed you!

My goodness, Rosie looks to be about as big as Arthur!! I am sure they were all happy to see you back at home (even though it means less food for poor starving Lisa.

I hope Mr. Gattino is feeling better now. It was nice of your neighbor to help him and rake all those leaves.

It is funny that Mr. Gattino had them eating off silver spoons!

Nice to see your cats again with their mama, and the life continues! but did they recognize you with all your jewels?
Hope all is ok now with Mr Gattino!
I am a little late but as you know France is a little crazy at this moment and today was a strike with public fonction!
Sarko! Sarko! Tu as augmenté ton salaire de 176 % et nous! et nous!
On veut aussi du pouvoir d'achat!

Bienvenida a casa Mrs Gattina I miss you so much my friend.

I need her adress for send you a card of "Navidad"

Have a Happy Thanksgiving!
Your friend Karl

Welcome home, Gattina and I know your cat family was glad to see you back again. I hope Mr Gattino is feeling better again.

How thoughtful of your neighbour to make a cat toilet especially for Arthur.

Have you taught Rosie to empty the dishwasher and put the dishes away, yet?