Here is a reluctant Rosie, not so keen to make a selfie. It is not better with Arthur, they are both in a marathon sleep, due to rain and cold weather ! 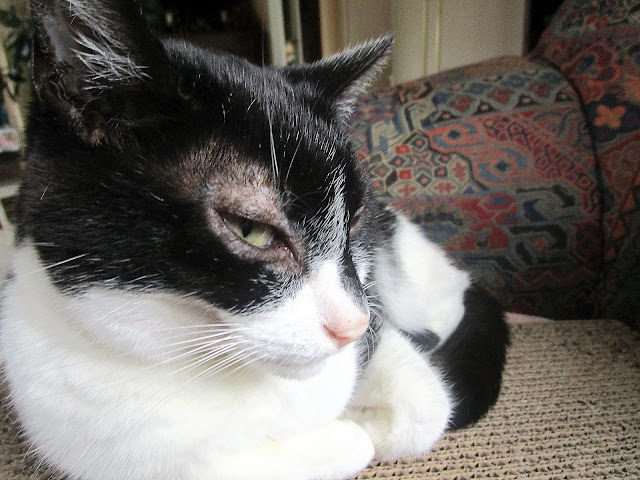 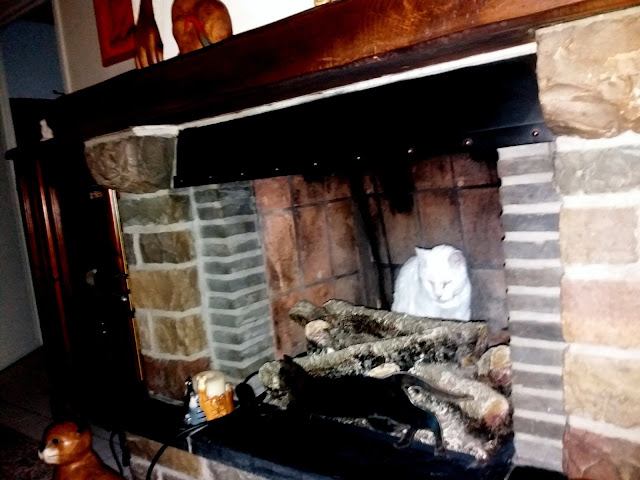 But no way to get out Arthur and to pose ! That's his last sleeping place ... behind the logs (fake) 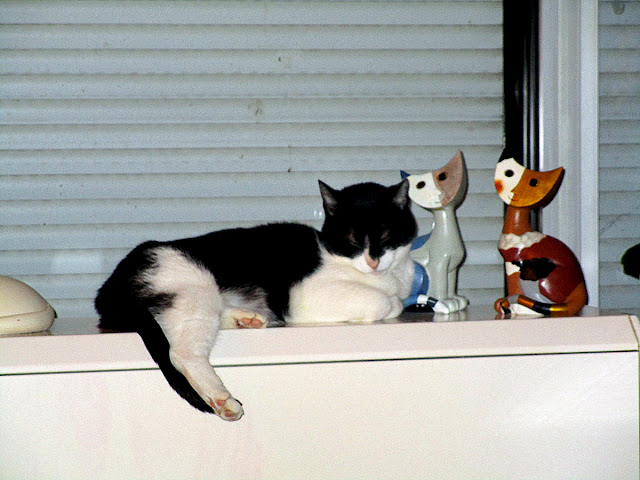 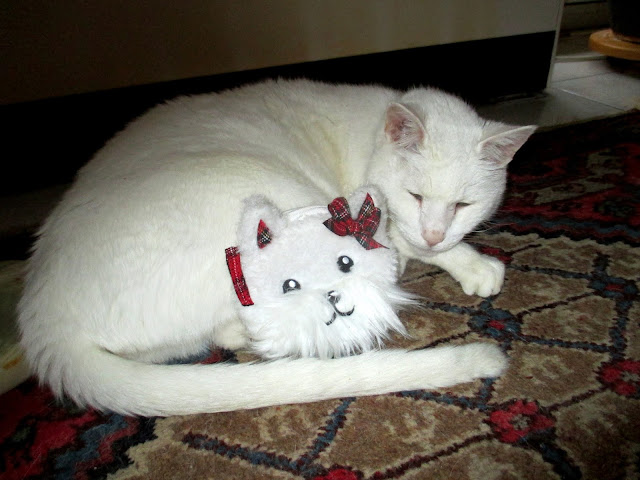 I have got this little wallet, looks like Arthur 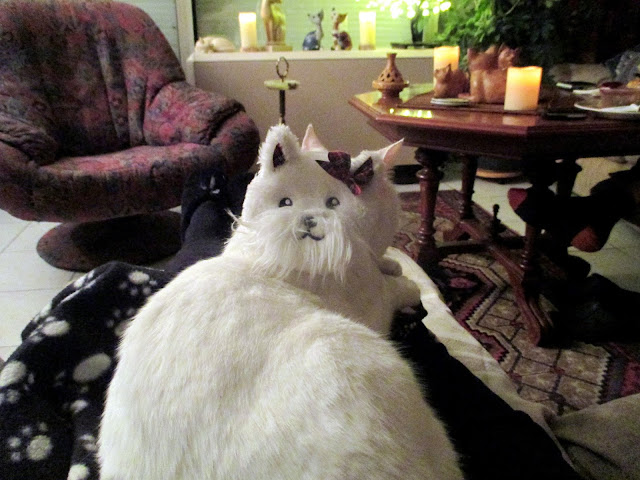 Now he has two faces ! 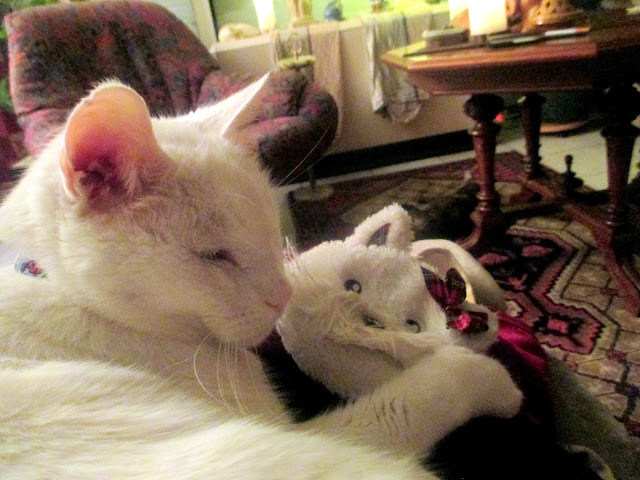 or he holds it between its paws ! 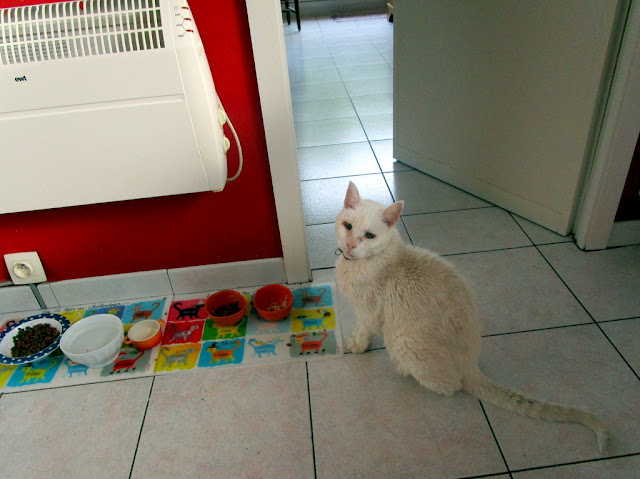 Arthur doesn't know what to eat he also looks dirty, he doesn't groom himself very often. I should give him a bath, but he will kill me !

Has anybody an idea how to clean an old dirty very reluctant cat ? Especially around his eyes and nose ! 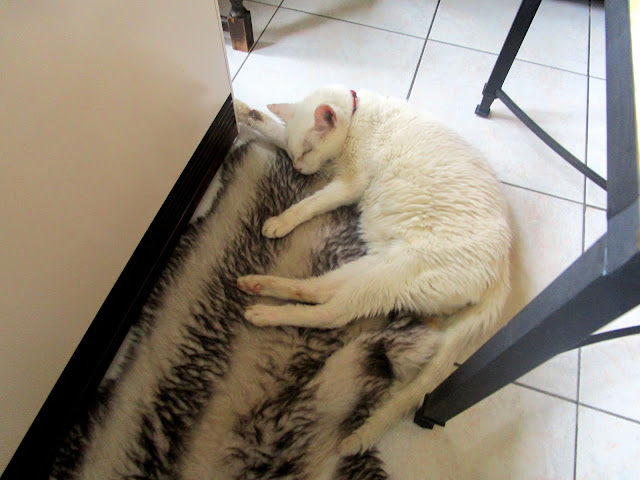 He loves this little fur rag close to the heating and warms up his old bones !

Some days he eats like a horse and some days he is very difficult, but he carries on his now very calm cat life.

Arthur's photos today (in need of a bath, or not) just made me giggle ... the kind of happy/sad/teary-eyed giggling ... so cute, what a dear boy he seems to be!

Awww, you guys all have our sympathy for the weather, as we have had few breaks in the rain and now some cold nights, too.
Great selfies from you both, or should I say 'trio'?
Purrs
ERin

Sweet selfies, I'm so glad those logs are fake, I was worried for a moment! Have a great week all.

Great selfies. I like the one of Arthur behind the logs :)

I don't know about Belgium, but here in the US, they have pet wipes, like baby wipes with less chemicals, for cats that can't be bathed.

Your wallet is very cute. The photo of Arthur with two faces cracked me up :-) Like Summer said, cat wipes may help.

So many adorable Selfies and that wallet is so cute. You made us laugh, sweet Arthur, with your double face 😸Pawkisses for a Happy Sunday🐾😽💞
PS They only clean me with water and cotton wool balls or a washcloth when I'm dirty. Good Luck with the cleaning😸

The Pet wipes available in pet food supply places or asking the vet office to do it, and gently. Remind them that he is NOT a dog and blow drying may not be the way to go.

Buddy is getting old and at times is a bit lax. Dad says he they sell cleaning wipes for show cats and he was going to try those.
Love seeing Arthurs photos.You too Rosie

It's nice to see Arthur and Rosie, as always. Maybe wipes will help with Arthur?