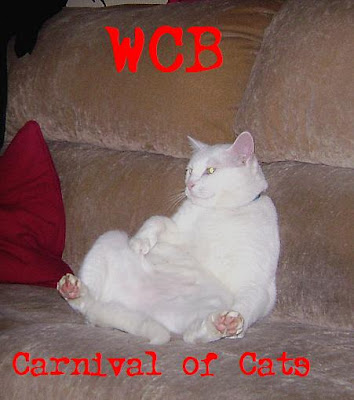 This week's WCB is at Kate's blog.

Yesterday I noticed Kim sleeping just in front of the Toilet door on the tiles, which is not really a comfortable place. But it didn't surprise me, because Kim has a lot of phantasy to choose the most impossible and uncomfortable napping places.

But the next morning she was still there. Now I found it a little strange because she didn't sleep anymore but was staring under the display cabinet which contains my cat collection. 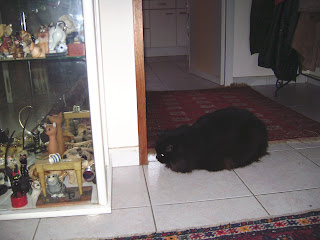 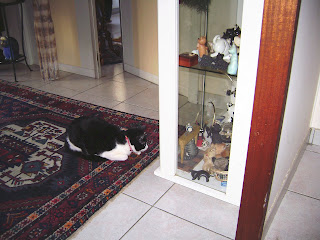 Meanwhile Rosie had joined and was also looking under the vitrine. I put her in the living room and closed all doors. Now we had to do team work. While I, armed with a broom tried to get out the mouse from under the cabinet, Mr. Gattino on the other side held a newspaper page rolled into a tunnel to get her in. We both were kneeling on the floor and exchanged orders : a little right, no more left ... hold the paper lower etc. etc.

The mouse ran from one part to the other but not in the newspaper tunnel ! We both got warm and red faced and finally I managed to get the mouse running out but behind the little telephone furniture. Me moved the whole thing away, just to see that she now disappeared behind the radiatior.

I took my camera, Mr. Gattino got angry "put this @#§%$ camera away" ! I finally opened the house door and with the broom in one hand the camera in the other and Mr. Gattino besides me fumbling around with the newspaper sheet I managed finally that the mouse ran out of the door. I dropped the broom and tried to make a picture of the mouse but she had already vanished in the plants. What a disappointment !

I was exhaused, let Rosie and Kim out of the living room, Kim didn't bother that the mouse had disappeared but Rosie sat still for a while in front of the cabinet and was very offended that there was no mouse anymore. 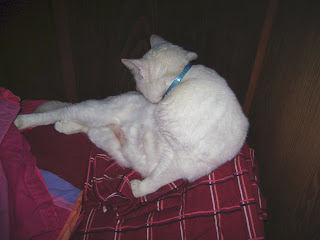 When I finally collapsed on my chair in my room, I saw Arthur washing himself in my wardrobe 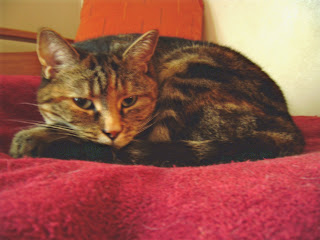 and Pookie glancing at me with suspicious eyes.

Love your story. I had a mouse in the house and have 3 cats. The mouse got under the hutch, and the cats could not get to it. Great for you in getting the mouse outside and such excitement for the 5 cats!

These are great pictures!!
We never got to have a live toy in the house! ... okay, maybe a few boring spiders!

You need to fire those cats for not getting rid of all the mice!! LOL!

Yes, you should have gotten a photo of the little mousey!! Your poor hubby!!

So great! What an adventure...

We can't believe it - five cats and you had to get the mouse outside yourselves! It wouldn't happen around here - we don't mind catching a bit of fast food every now and then! We even bring it inside for mum to see so she doesn't miss out. Maybe your cats just need a bit more practice,

Funny Story, Gattina. Don´t be worry, we also have sometimes a mouse here, but I never get it for a photo.
That´s the reason why we don´t install a catflap. Our cats love it also to catch rats and Marder and other "big mice".
Happy Sunday afternoon to you

How funny! Why is it that every single thing for us is a blogging opportunity and nobody else understands? It happened to me with my duaghter, too.

But hey! You saved a little mousie's life!

Beautifully written and illustrated story! I can quite imagine it all. I've yet to have a cat that could catch a mouse but several who were very good at finding them. I prefer Stasia stick to her fuzzy mousies!

My lazy cats did not want to help me when we had a mouse inside our house...
I was thinking you could write a book about your cats - all your cat stories :)

Oh that's so exciting! Puddy has never caught a live mouse, but she has brought inside one which was already dead! Thanks for participating in this weekend's edition of WCB!

The Pookie photo is great!

hi i've been reading your blog and maybe you would like my dec 21 post about me and dennis - but i will do cats on thursday from now on.

i had caught a mouse once and kept it on my pillow and it wasnt hurt but just scared stiff. My human let me sniff and touch it then she took it outside. a hawk probably ate it, who knows?

Sometimes I think the cats want to keep the mouse to play with later.
Thanks for joining CotC this week!
Robyn & Mini

Hahahaha....Gattina,
I can totally understand your mood. When I want to take some more pictures in some very special consition, Pamilla also will say no~!
Even become mad~~ She thinks I am photo too much~! But I think if I can't photo, It will be very lost~!

Well, I am glad that mouse was away, I can understand the cats feeling. 10 year ago, Pamilla has a longfur cat(he is not here anymore), one roach run under the piano, and that ct just wait in front of the piano for 5 hrs. I think that is silly and funny, the roach might going far away or maybe hiding, but they have the most amazingly patient, that is impress me~!!!

I think Arthur is really relax, maybe he has seen too much, so not many things could surprised him :>

Laughed through your tale of the mouse, especially when Mr. Gattino got upset when you brought the camera out. Just like a man, doesn't think of the photo opportunities for a blog! LOL! Glad to hear that Rosie's joined the Tuxedo Gang Hideout. Mouse hangs out there too :)

What a cute story. I really like that the mouse was okay. Once we had a live chipmunk in our house and he got out alive too.

Hahahahaha - we would have LOVED seeing that!
We will have a surprise guest coming tomorrow and a big party on Thursday!!!

That is so funny. Sometimes Martin will be like, "enough with that camera!" but I want to Blog about it!
Yes you can sure tell those guys are up to something watching that cabinet so intently.