CAT SELFIES AND NEWS May 4 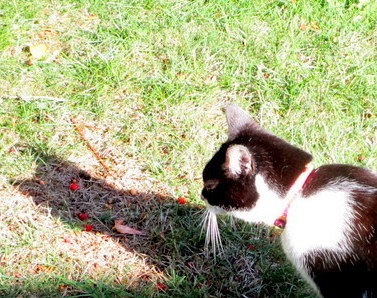 Sorry, my shadow wanted to be on my selfie ! 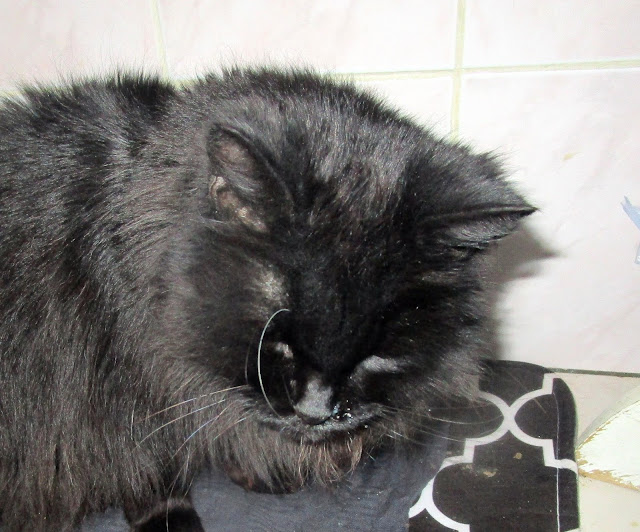 That's all I can show you, I am lazy 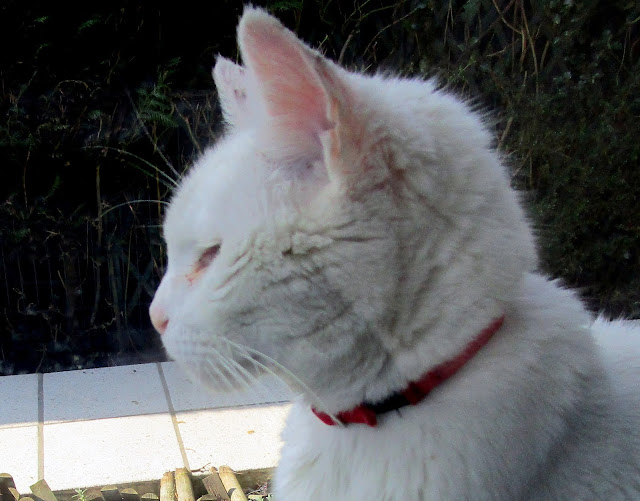 My eyes are watering I have to go to the vet ! So you only get my profile !

As Mr. G is still in hospital and has just started his reeducation, he will be absent at least 2 to 3 weeks more.

Meanwhile Arthur has understood that he won't come home so quickly and now he tries to terrorize me ! I have to say it is a hard fight especially when I put a bit of whipped cream on fruits, then he gets crazy. I give him a little bowl that he finishes in Olympic records time. And then he wants to jump on my plate ! 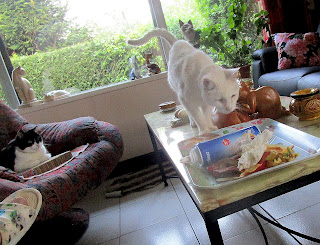 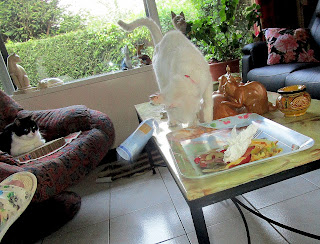 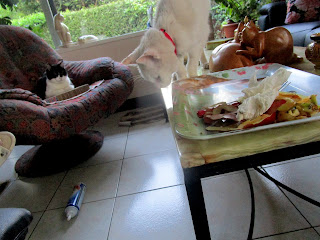 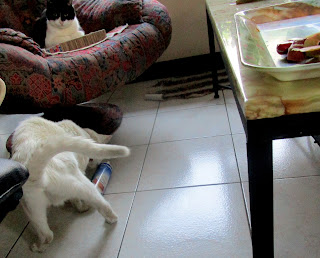 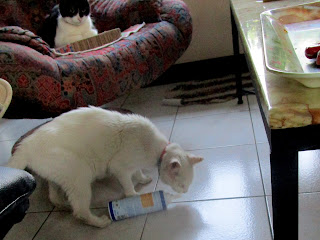 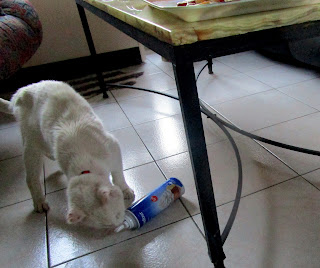 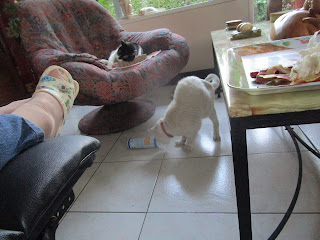 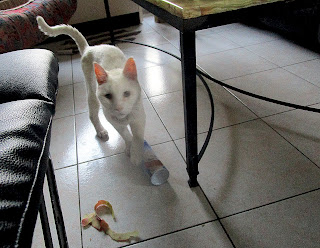 There was nothing anymore and I had put the tray on the table, but Arthur didn't trust me and took off all apple peels to check if there was a bit cream left. Then he throw the sprayer down and tried to open it ! I let him work (at least I had my peace to watch the movie) until he realized that nothing came out anymore. Then he started his famous opera concert, without success and finally gave up.

I have to say it is very tiring to fight against a cat's will ! Now I don't eat whipped cream anymore in his presence ! It's too exhausting. Besides that he plays Brexit with me, he will go out, when he is out he will come in etc etc and has apparently forgotten that we have a cat flap. 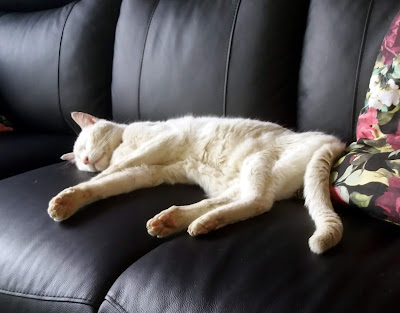 He gets also old and bony and I have to go to the vet because there is something with his eyes, they water and he always has crusts in the corners. I always forget that he is 18 years old ! 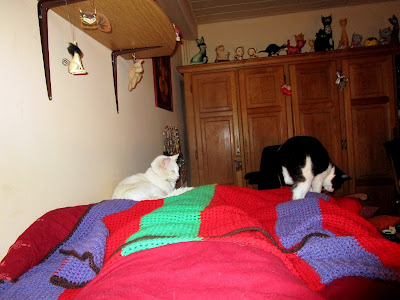 Rosie reluctantly had accepted that he too sleeps in my bed, as Mr. G's bed is empty. 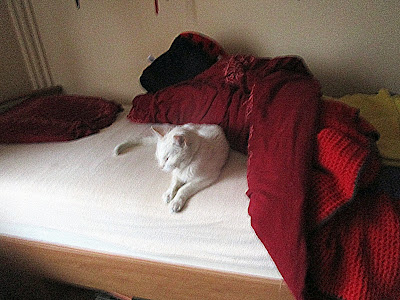 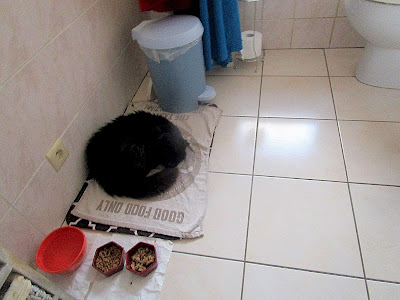 The only one is 20 year old Kim who hasn't changed anything in her lifestyle she eats and sleeps and eats and sleeps and changes from bathroom to bedroom from time to time. Instead of becoming skinny as all old cats, she puts on weight, has a good appetite and we could eat her easily on Christmas instead a rapid. (Poor Kim). 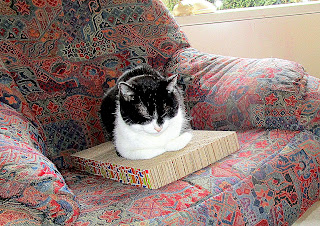 Rosie still sleeps on her scratching board when she can't go out.
Posted by Gattina at 9:45 AM

Best wishes to Mr. G and to Arthur for his eyes. Looks like you all are keeping busy and are taking care of your Mom (and her cream).

It's always nice seeing you all, Rosie, Arthur and Kim. We are purring that Mr. G can come home soon. It seems like Arthur and Rosie miss him, and it would be nice if you could eat in peace, Gattina! :)

We hope Arthur will be okay, and that the vet visit goes well.

It's hard to believe Arthur is 18 - he is so full of life and personality! But then, Binga is the same age, and the same way! I hope the vet has a remedy for his watery eyes.

Nice to see everyone today. I didn't know Arthur was 18. My Millie is skinny like that too and his thyroid is in range with his meds so it concerns me.

Get better soon to Mr. G. Arthur our Buster likes whipped cream too, that is why our humans don't keep that thing around the house anymore. He will go crazy asking for it. Now he's content with just milk.

Bless Arthur, he is a wonderful looking boy for his age. Our senior white boy is about 15 (we think).

We well soon Mr G.It seems you are missed at home.

Sending purrs and prayers to Mr G to come home soon and fit. Ah the old cats (Past Elder) do get picky. We are lucky Buddy Budd is more like Kim than Arthur except for the odd yowl from the top of the couch directly into Dads ear. Heh Heh

Ahh, some great selfies there from you all, including Kim. Arthur sure is an active guy when it comes to that cream, but then I would be too! Here's hoping a speedy recovery for Mr G, and our thoughts are with you all in that regard. Kim is such a great lady, and I can but admire her steadfastness when it comes to routine, and clearly she has a diet that agrees with her, too— though I think she might baulk at the thought of being Christmas lunch ;)
Lots of purrs to you all,
ERin

I hope vet will figure out what's going on with Arthur's eyes and that he gets better soon. He looks so much younger and active for 18 years old!

Poor Mr G. We were hoping he was out of the hospital when we saw your gorgeous Selfies. All the best to you all and Healing Pawkisses for Mr G and Arthur for a speedy recovery❤❤❤
Oh, and don't eat that kitty without me😹😹