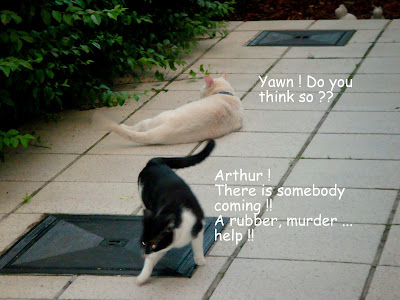 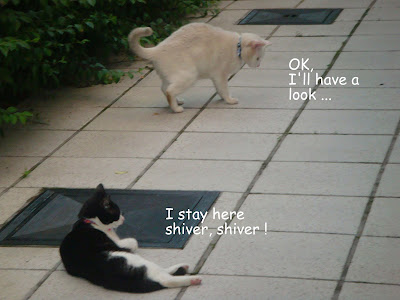 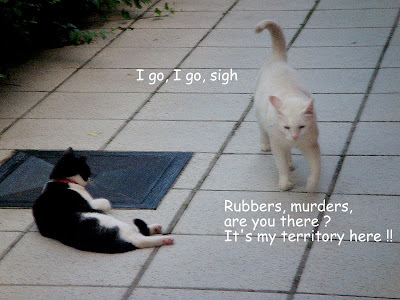 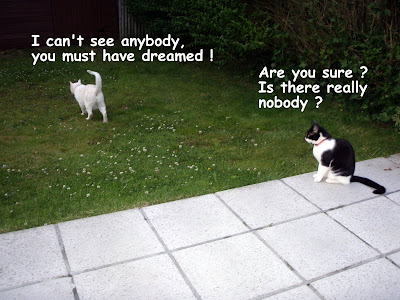 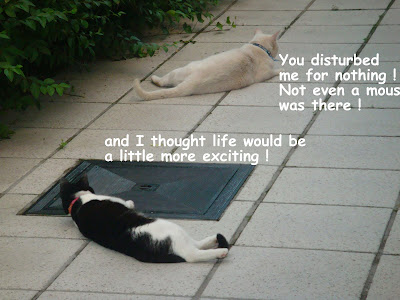 When Arthur came back from his daily walk through gardens, bushes, and fields he was full of little green sticky balls. When I tried to take them off he became very angry, hissed at me and threatened with an outstretched paw showing his claws ! I told him to go to hell and clean himself alone !

what he did then for hours. See the little green spot I marked with an O.

Rosie is still very proud of her successful mouse hunting (see post below) but shows herself as a very modest and shy little girl.

But of course that didn't last long

she then needed to be praised to have done such a great cat job.

Pookie as always is meditating about the world's cats problems and spent her day on Mr. Gattino's bed as she is always doing. Good or bad weather, she likes to stay inside.

I have problems with uploading pictures, I have reached my quota with Blogger and with Photobucket too. Now happened what I always "feared" I have to pay. Sooner or later all these photo storage companies ask for money. I choose Picasa/Google because it was finally the cheapest. They ask 20 $ per year, but added 4.50 $ of taxes (???) I wonder for what ? I live in Europe and pay my taxes here.

Pet Cost Calculator is brought
to you by money.co.uk where you can check out pet insurance uk.

ROSIE AND HER FIRST REAL MOUSE !

I know my cute little Rosie as an adorable little lady, counting and playing with her colorful toy mousies.

But then one day I saw her jumping and playing in the garden and wondered what she did. As it was so funny I took my camera and made this little video without knowing exactly with what she was playing !

But then suddenly I realized, it was a real big mouse ! She carried it in the kitchen and put it in her dry food bowl. I thought she is a well educated cat and only eats mousies out of a bowl.

but this wasn't the case, Miss Rosie didn't like the taste of Mousie and preferred her usual dry food.

She ate her food around the mouse

with a good appetite and real pleasure

all I had to do then was to wait until she finished and put the mouse in the bin !
Posted by Gattina at 4:14 PM 14 comments:

Our little Lisa is really getting old. We have to prepare ourselves that she will leave us sooner or later. I hope it will be the latest possible. Lisa is now 18 years old. So far it all went quite well, she got on our nerves as usual sitting somewhere in the middle of the house and croaking loud without any reason. But even that she doesn't do anymore.

She is completely deaf now and I have to approach her so that she can see me and touch her carefully otherwise she is scared. She doesn't eat anymore or only a little. I try to give her all the things she loved in the past, but even that doesn't work. She also has diarrhera each time she eats a little. I have put a litterbox in the office which she has choosen as her room. During the nights I lock her in so she isn't bothered by the others.

Rosie who always tried to play with her tail or to attack her for playing, now goes around her in a big cercle. Even Pookie who always had hissed at her doesn't do it anymore either. It looks as if they feel that she is defenseless.

She mostly sleeps in her basket

sometimes she walks a little around and would sit with us in the living room.

her eye is running too. On this picture she looks fine, but she became very skinny. I don't want to stress her with running to the vet. As long as she doesn't suffer and leads her life as an old lady, I am happy. If ever she starts to suffer then I will call our vet. I want that she dies here in her house and nowhere else. I only hope it won't be too soon. I always tell myself that she had 18 years of a happy life without any worries.

Arthur watches over the street on our neighbors little wall

and when he comes back (usually quite colorful) he tries to get white again !

CATS ON TUESDAY - How to handle boredom ?

Since we are back from Italy the weather was absolutely lousy. Rain and only 16°C (61°F).
Arthur took it with composure and slept the whole day.

Rosie handled her boredom by hiding herself and jumped out on everything which moved, a cat, a leg, an arm,

Pookie took care of the telephone

Kim didn't bother, she anyway prefers her tent and stays outside.

But then one day, the rains stopped and they held a meeting on the still wet grass. Arthur of course didn't realize that it was wet, the females are a little more sensible.

Rosie by distraction talked to the fake Arthur

and Arthur tried to teach his stone double how to pee in the grass. It didn't work. Only for Arthur.

In my email box I found this pictures from an English friend. Arthur should welcome us home like this :

I wished Arthur would agree to this outfit. I have everything he would need. But he won't agree !

Please use Mr. Linky (if it is there, lol) It should work (normally)

The very last day at the Garda Lake, coming back from the beach I thought I had hallucinations. Coming out under a quite big gate leading to a well protected private villa, Arthur crossed my way !

When he saw me he immediately came to say hello and turned around my legs, purred and was so really friendly !

I stayed and played a while with him, he was still a young cat about 6 months old but really Arthur's double !

Our Arthur while we were on holidays had choosen a new napping place, which he hasn't used for almost a year. As I didn't know that, I nearly stepped on him because he lays now under my desk and waits until the heat is gone before he visits the neighborhood.

The next day after our return I found Rosie a little strange but thought it was because it was so unusually hot. But then I noticed that she had difficulties to swallow as if she had something in her throat. The next day she tried to eat, but had to spit out the food, even the wet one. It didn't go through. In the evening I ran with her to the vet.

Rosie had a sore throat ! an Angina. I didn't even know that cats could get sore throats !

The vet gave her a shot with a painkiller. I told her that by watching her, I was now able to give shots and had done it into the belly of Mr. Gattino after his operation. She found that very good and suggested that I could give the shots myself, Rosie still needed 4, one each day and this way I didn't have to come back unless there was something special.

Armed with this shot I pulled up Rosie's fur and sticked the needle in. For some strange reason Mr. Gattino had something else to do and couldn't take a picture of me as vet. Rosie didn't even realize and only wondered about this strange thing.

Today she feels good again and I have to give her the last shot this evening, but she eats normally and apparently her throat doesn't hurt anymore either.

To comfort her I bought her two fresh mousies, the once she adores to carry around and let them drop into the food or water.

Pookie sleeps 24 h, ol'Lisa sings the whole day and want to eat and Kim I have only seen twice since we are back. She must sleep somewhere in a shady place.
Posted by Gattina at 5:43 AM 14 comments: