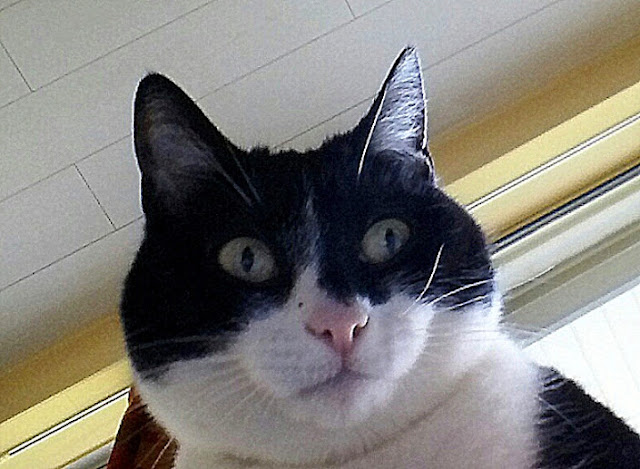 Do I really have such a fat face ? or is it your camera ?? 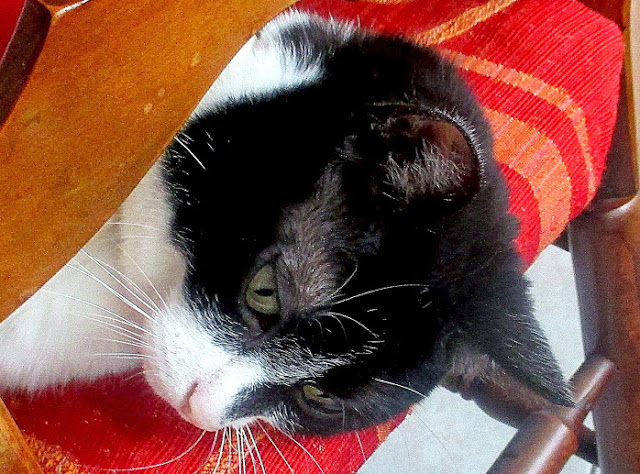 I was hiding under the table and you found me ! 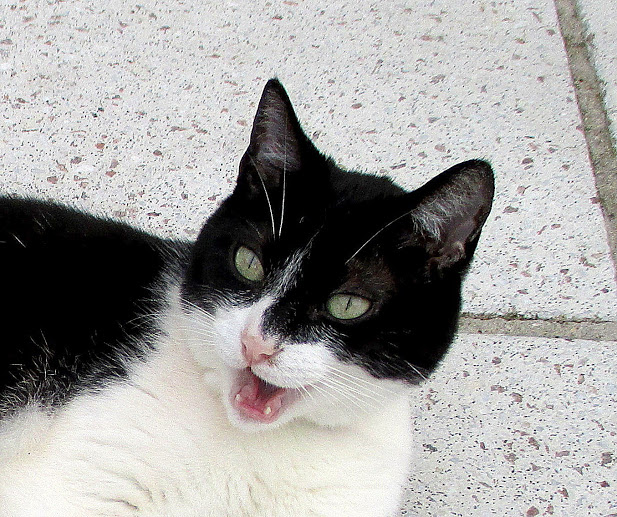 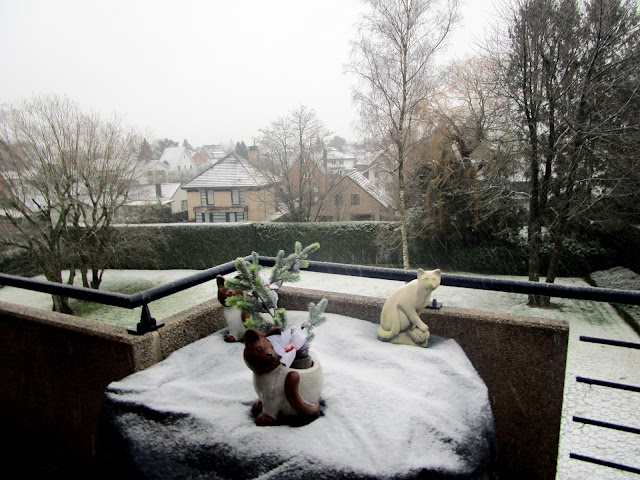 It is a long time ago that I haven't seen this white kind of powder ! But she couldn't convince me to put my paw in this white cold stuff ! I preferred to stay inside and look out from my cat tower 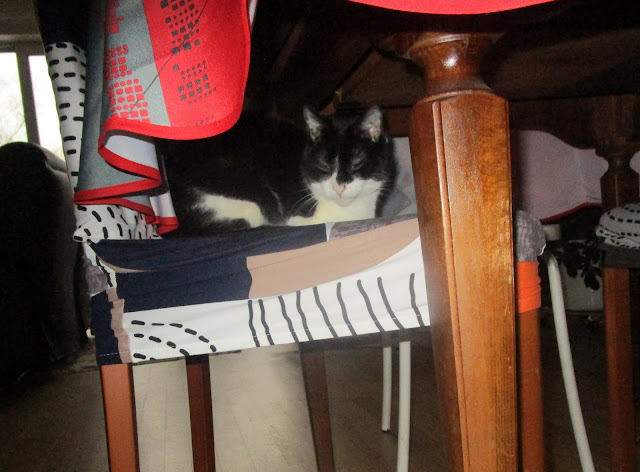 The woman who comes once per week and puts everything upside down and on top uses this noise
making thing, came today on a Saturday ! It's a shame, I first hid under my maid's bed, then I had to move into the Butler's bed because she followed me with that awful thing ! What a morning !Now I like my new kibbles but only in the small little bowl and not in my usual bowl anymore. She dared to make a test with me, put the new kibbles in my old bowl, and a few in a new one smaller and it is in ceramic and brown ! Looks much better. I decided to only eat my food out of the new bowl and she finally understood (humans sometimes need a long time to understand us cats !) and put the old bowl in
the cupboard. Maybe I will change my mind in summer !
The Butler has bought a new mobile because he had a very old one which broke down, and now he has to learn how to use a smartphone for  seniors ! I don't understand that he gets angry if this thing doesn't work like he thinks.
My lady in waiting called his friend and asked him if he could explain how this new mobile works. The Butler was very excited ! I like his friend very much and assisted of course to the explanations. Fortunately we cats don't need these things, we have other means to comunicate ! 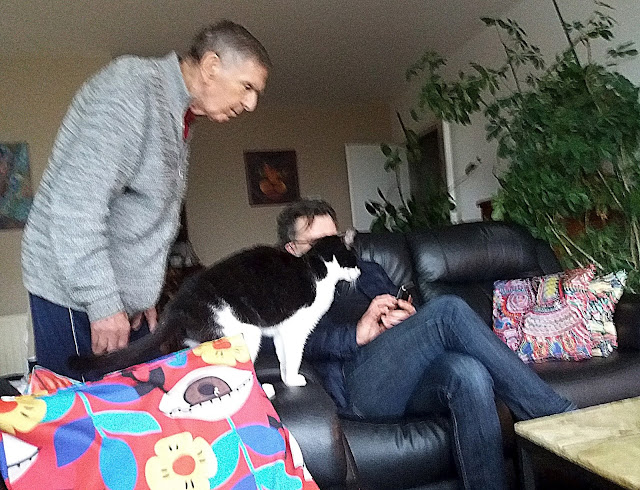 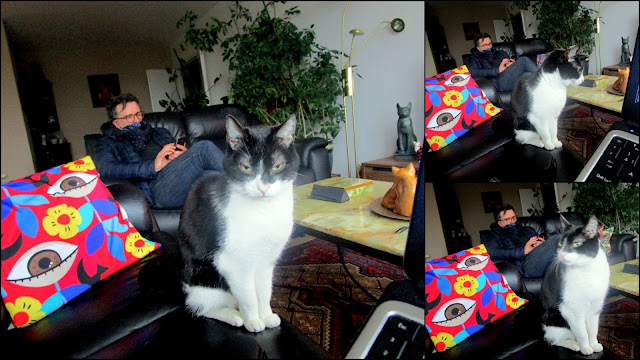 and here they are both very busy ! After a while as nobody payed attention to me,I retired and fell asleep on my favorite chair, because the explanations made me sleepy. 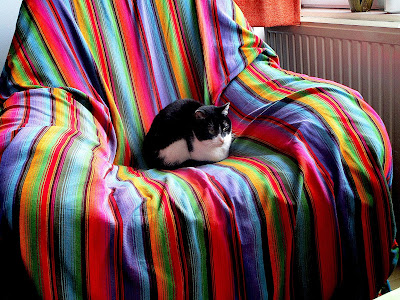 In the evening the Butler was still a bit nervous when his new mobile rang, it was his son who did it on purpose because he knew that his father would get excited if he doesn't find the right button immediately ! What an afternoon !! My servants are really exhausting !!
Posted by Gattina at 8:00 AM

Your humans really keep you busy, don't they, Rosie?

Of course your face is not fat! It's just the camera - or maybe the paparazzi photographer!

Looking good, Rosie! How exciting that your got a new phone. And it was nice of your friend to come over to show him how to use it.

Rosie, you are such a cutie! Best to your Peeps on the new technology, it can be stressful until you get used to something new. Have a wonderful week.

Our human's antics can keep us cats busy. And new technology can keep them busy when they should be playing with us! We hope you have a marvellously Happy Day!

That camera needs checking as there is nothing fat at all about you Rosie. Looks like the servants are getting it together so take a nap and call them in the morning to get breakfast. Glad you trained them about your bowls, finally, they can be so dense

You don’t have a fat face, Rosie. It’s definitely the camera :-) Of course you eat only from a new bowl. Kitties know what is the best :-)

You have a beautiful face sweet Rosie! Yikes, that white stuff isn't fun!

Your face is not fat. Nice selfies. Sorry the cleaning lady kept chasing you, that was not very nice.

You know what?? Even us pups are nervous of that noisy sucking machine...it comes out of its hiding place too much for our liking...

We do think the camera dd you a disservice by making you appear as you are not!

Petcretary will need a new mobile sooner or later and it will be a whole new ball game for her...yikes! New tech is so different from old tech, sheesh.

We have that white stuff here, too.

A cat's work in never done eh? I am glad your dad got his phone working a good smartphone can make a big difference to you once you are used to it.

Yeah, servants are really exhausting that's why we nap 18 hours a day!