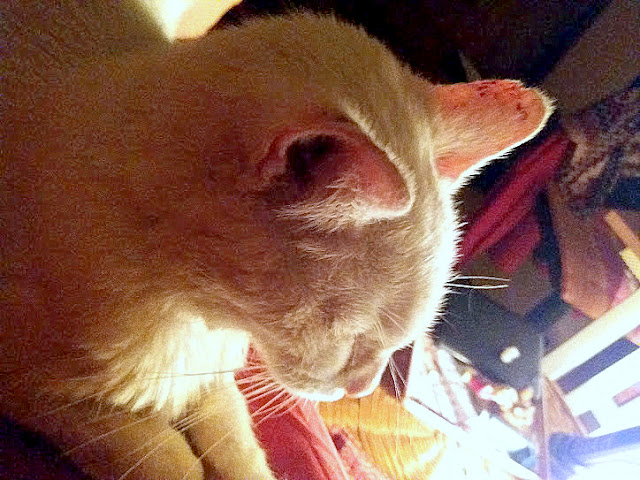 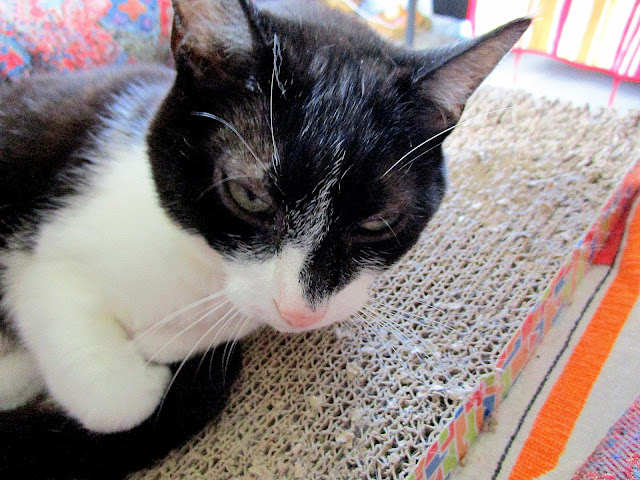 Wait a minute that I wake up ! 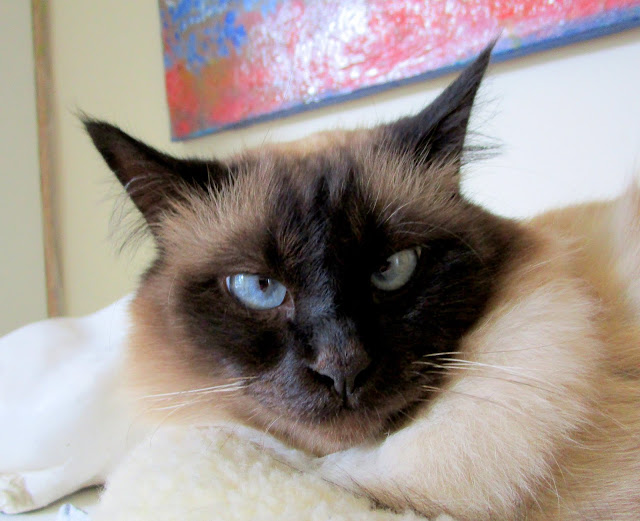 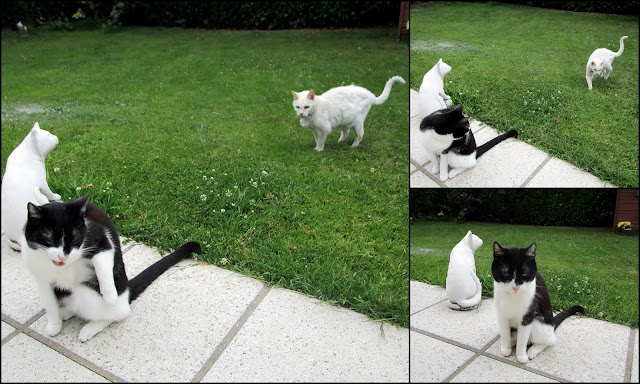 It was still very warm beginning August and Arthur and Rosie were mostly outside, sleeping in the garden.

Since Kim is gone, both of them have changed, now they are again together as they were when Rosie joined the household 12 years ago. For at least 10 years, Rosie always hissed at Arthur when he wanted to sleep close to her. Now she chases his tail and they are again close together. 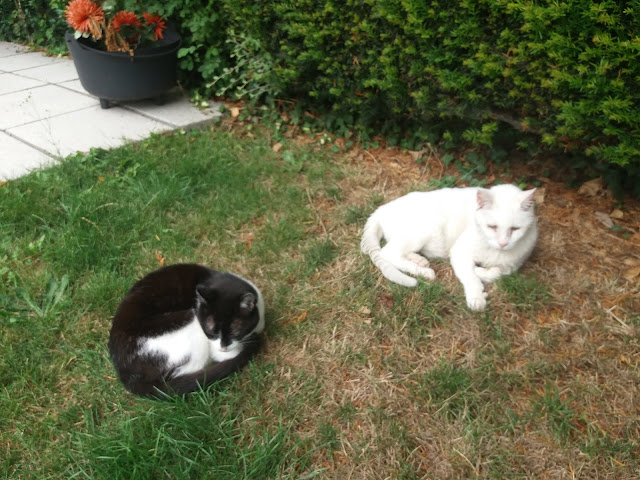 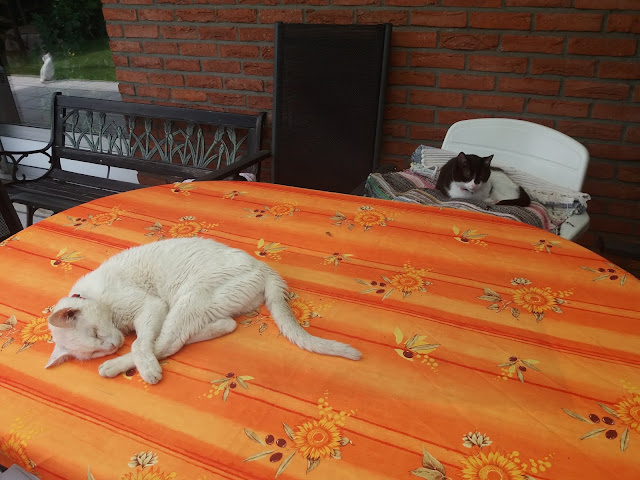 Arthur loves to replace a vase, and Rosie needs all cushions from the chairs as her outside bed. 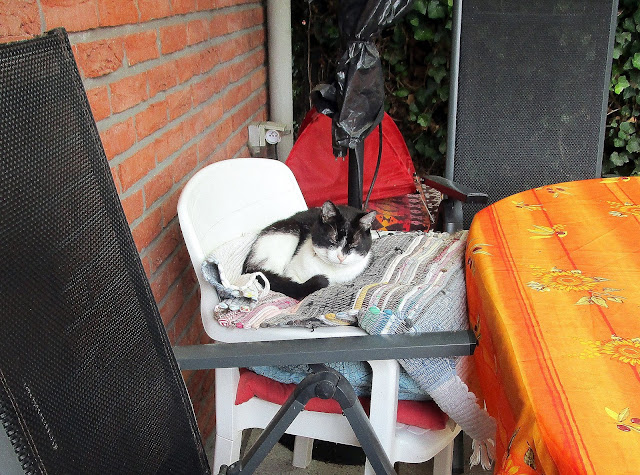 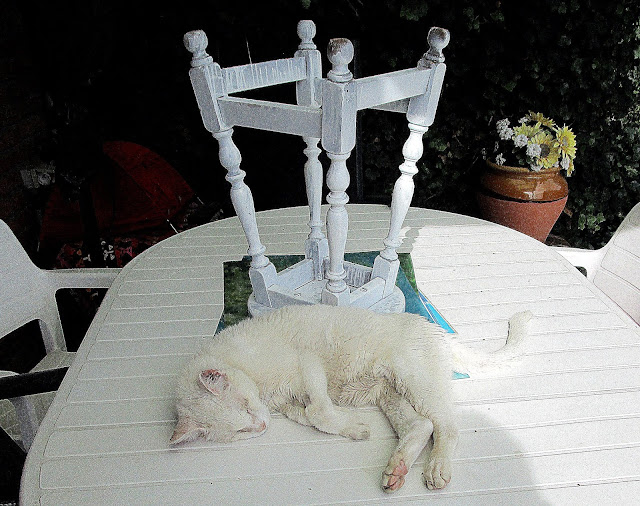 Arthur "watches" over my freshly painted stool. No mouse or bird hunting, they are both very lazy.

And then it started to get cool and cooler and was grey and humid outside. It smelled already a bit like autumn, far too early ! 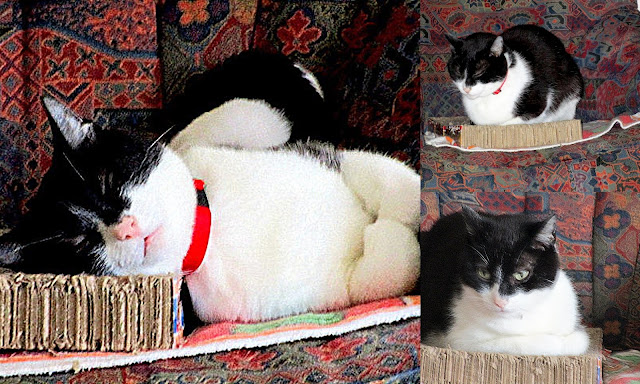 Miss Rosie now spends her days on the scratching plank which she adores. She takes care of her claws at least 10 times per day and then lays down happily. It's so used up that I have to buy a new one ! 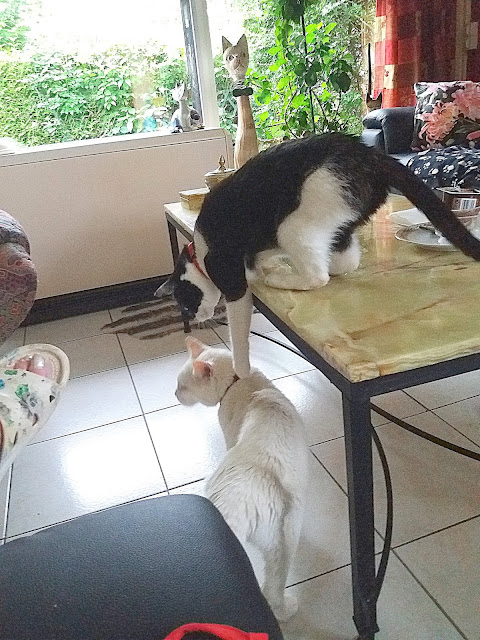 and when her play hour arrives, she likes to tease poor old Arthur ! 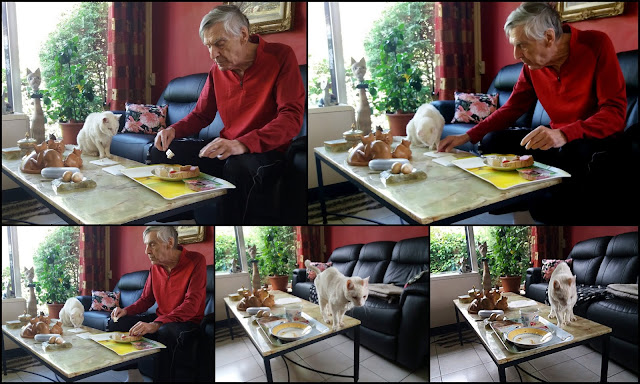 Arthur has become a pain in the neck ! He always asks for food and talks a lot ! "Poor" Mr. G. is complaining all the time and feels harrassed, he can't sit down in peace and eat, Arthur is immediately there. Of course it is not Mr. G's fault, but Arthur's. Who started to feed him at table I wonder ? According to Mr. G. it was Arthur. Sometimes I think they became very much alike ! They have the same loud voice and the same idea the whole day "when do we eat" ?
Posted by Gattina at 1:30 AM

It's interesting how relationships change when one cat in a family passes away. Boodie has taken to sleeping on the bed more often since Binga died.

Life is cyclical they say, and I think it is true. We miss seeing Kim a lot, but life goes on and your family reflects that everything is fluid — relationships, places to sleep, play, friendships. Clearly food isn't though, at least so far as Arthur is concerned, MOL
Have a lovely and cool week
Purrs
ERin

We love how Rosie use the scratch board as pillow! So cute! Purrs and hugs!

Great selfies! Looks like Rosie really loves the scratching plank :-) When I had three girl kitties and one of them passed away, the same thing happened. Other two who used to hiss each other became close to each other.

How interesting that Rosie and Arthur are once again close, since Kim's passing. We are glad they have each other.

How sweet that these two are close again.

Katie and The Katz said...

Nice to see Rosie and Arthur enjoying each others company... Arthur sure can be a funny pest - I love pestering the Mom about eating too!

Love and purrz from Chiquita
who nips mom and lays on her hands to keep her from typing so she will feed me.

We are back to blogging again with KFM Newz. Please stop by to visit. :-)

How good it is to see the cats happy. They DO make me smile.

Arthur and mr G Hmmm I wonder who treats who to tasty morsels :-)

Arthur you are like Buster. You keep on asking for food.

We are loving your pawsome selfies. Looks like a wonderful time to relax outside on the patio furniture. Thanks for sharing the lovely photos. Have a fantastic day.
World of Animals